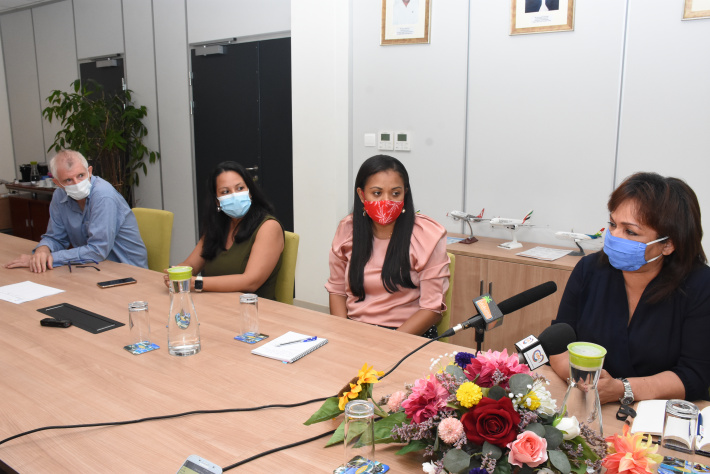 ‘Tourism Wi ’ is the latest campaign tool developed by the Seychelles Hospitality & Tourism Association (SHTA) in collaboration with the marketing body of the destination, the Seychelles Tourism Board (STB), the tourism department and the Seychelles Tourism Academy (STA), to sensitise the local population and business stakeholders alike on the importance of tourism for the country in the wake of the coronavirus (Covid-19) pandemic.

The campaign has as objectives to make the population more aware of the importance of welcoming back visitors to our shores and their importance for the economy and to be conscious of the need to follow health protocols against Covid-19, put in place by the health department, so as to continue to keep the country a safe tourism destination.

It seeks to engage the locals and build their confidence in light of the arrival of tourists into the country. Furthermore, it emphasises the importance of preserving the Creole hospitality for which the Seychellois people are praised, a treasured trait, which is cherished now more than ever as people seek refuge from the storm of the pandemic.

The ‘Tourism Wi’ campaign will be run through spots on television and radio stations, including in print media and social media platforms of both STB and tourism-related partners.

The first stage of the campaign started running in the media as of Friday October 16, 2020. An example of a picture message of the ‘Tourism Wi’ campaign appeared in the Monday October 19 edition of the Seychelles NATION newspaper.

Speaking to the press on Monday morning on the launch of the campaign, the chief executive of STB, Sherin Francis, said that it is important at this delicate moment in time, when the country is restarting its tourism activities, that we all understand what is at stake if nothing is done to revive our tourism industry, and also to value what is being done at the moment while making sure that we are all on the same page to welcome back visitors.

Mrs Francis said the ‘Tourism Wi’ campaign will run until December 4, 2020, with very high impact awareness messages so as to raise the confidence of the population that the country is ready and can receive visitors while also being able to keep itself safe from the virus.

She said that depending on resources, the campaign could continue further.

She noted that some of the key messages will include making people aware that it is the tourists who contribute to get food on our plates among others.

She stated that we must not lose our focus in trying to revive one of our most important pillars of our economy and that we must come together to get the industry back on track, irrespective of an election process or not.

To note, according to the tourism department, 4539 visitors have visited Seychelles as of October 11, 2020, since the re-opening of the country on August 1, 2020, in the wake of the pandemic.

She highlighted the need for us to prepare ourselves now, in terms of re-discovering our welcoming charms towards our visitors, as more are expected to come through efforts being done to showcase that Seychelles is safe against the spread of the virus.

Also present at the launch were principal secretary for tourism, Anne Lafortune, and SHTA’s representatives Louise Testa and Martin Kennedy.

PS Lafortune said that while it will take some time before the other sectors in our economy really reach the level of contribution attained by the tourism industry, we still need it now to develop the country.

She stated that for this to happen, we all have to work together to value and appreciate more of our arriving visitors.

PS Lafortune hailed the tireless work being done by STB and the tourism industry stakeholders, to ensure, through the health protocols, that our destination remains a safe place where tourists would like to come and visit.

She noted that in 2019, the tourism industry contributed $576 million to the economy, averaging roughly to $48 million per month.

With regard to the theme, Mrs Testa said that apart from the seriousness of the campaign, the messages put across will be entertainment so as to attract the audience’s attention.

Mrs Testa also said that in view of the economic situation, the country really needs the industry to feed its population and for its debt repayment.