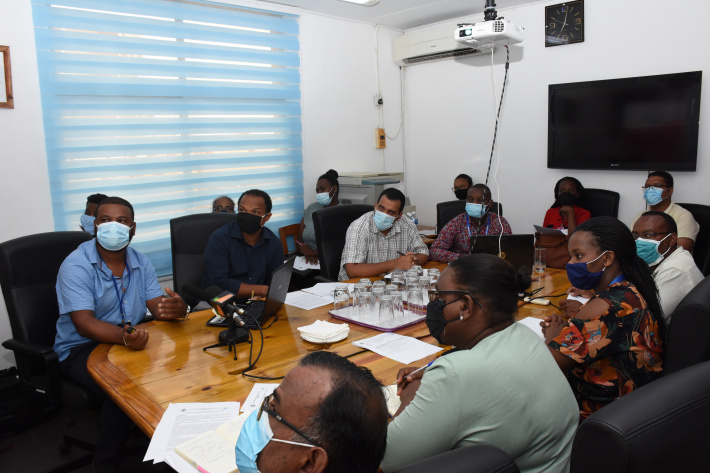 Seychelles is bracing for very dry weather conditions over the next three months as the La Niña phenomenon makes her return.

This was revealed during a National Climate Outlook Forum (Nacof) organised by the Seychelles Meteorological Authority (SMA) yesterday at its headquarters at the Seychelles International Airport, Pointe Larue.

The main objective of Nacof is to present to stakeholders the climate outlook for the period October 2020 to January 2021, which is the upcoming rainfall season for Seychelles.

“This forum is an opportunity for the SMA to meet and discuss with the various stakeholders the potential impacts of the seasonal climate outlook on other socio-economic sectors including disaster risk management, food security, health, water resources among others. This year we are forecasting less rain compare to our normal mainly because this year we expect to see the La Niña event,” SMA’s chief executive Vincent Amelie said.

What is La Niña?

La Niña is a complex weather pattern that occurs every few years, as a result of variations in ocean temperatures in the Equatorial Pacific. It occurs as strong winds blow warm water at the ocean’s surface from South America across the Pacific Ocean towards Indonesia. As this warm water moves west, cold water from the deep sea rises to the surface near South America. As a result, it is considered to be the cold phase of the broader El Niño–Southern Oscillation weather pattern, as well as the opposite of El Niño weather pattern.

“Normally La Niña affects Seychelles during the time of the rainy season where it tends to suppress cloud development and bring less rainfall. So we expect it will reoccur and become quite active during the months of October to December. Going towards next year – January, February and March – we expect the influence of La Niña to reduce and when this happen we expect our rainy season to go back to normal. Knowing these facts, all the stakeholders need to prepare ourselves as water can be an issue in the next three months ahead. La Niña usually brings drought and after that with our rainy season we might experience flooding,” explained Mr Amelie.

Methodology used for this forecast

During the meeting yesterday, Egbert Quatre gave a detailed presentation on the performance of 2019/2020 seasonal climate for 2020/2021.

He explained that “using statistical and other objective climate prediction methods, as well as expert interpretation, the climate scientists from the Seychelles Meteorological Authority determined the likelihoods of above-normal, normal and below-normal rainfall for each area for rolling three monthly periods i.e. October-November-December (OND), November-December-January (NDJ), etc. Above-normal category is defined as lying within the highest third of the recorded 30-year average rainfall; below-normal is within the lowest third and normal is the middle third. It should be noted that this outlook was produced for the first half of the rainy season. An update for the next half of the rainfall season will be issued later in season.The outlook for Tropical Cyclone (TC) activity over SWIO basin (30°E, 90°E/0°S, - 40°S) is also provided for the upcoming cyclonic season (Nov-May). The climate scientists from Meteo France took into account oceanic and atmospheric factors that influence our climate over the SWIO region, in particular the El Niño-Southern Oscillation (ENSO) and regional climate drivers such as the Indian Ocean Dipole (IOD) and the Subtropical Indian Ocean Dipole (SIOD).”

According to SMA, most global climate models suggest that: There is also an increased chance of a negative Indian Ocean Dipole (IOD) which should reach its peak in October before going back to a neutral phase by January 2021. El Niño Southern Oscillation (ENSO) is expected to develop into a La Niña event by the end of the year (DJF).These patterns are likely to drive the Seychelles climate for the coming seasons i.e. OND, NDJ and DJF.

Should we be concerned about cyclones?

Mr Amelie said the debate around cyclones is always on. “Where we are located, cyclones do not form. But we do get the effect from the tail of the cyclone which influences our weather. Because of climate change talks around, whenever we are hit by the tail of the cyclone, people start thinking that we will get cyclones. I can assure the people that from last information received and studied, there is no evidence that cyclones are coming closer to the equator. Seychelles will continue to be influenced indirectly by cyclones in the Indian Ocean but cyclones will continue to stay in the south.”

“Many of us recall the heavy rainfall experienced during the 1997–1998 El Niño and the 1998– 2000 La Niña which brought dry weather and heavily impacted the economy of Seychelles. So it is better to be prepared than be surprised,” concluded Mr Amelie.

The meeting yesterday morning was attended by representatives from the Department of Risk and Disaster Management and the environmental sector, agriculture and fisheries sector, water sector, transport and infrastructure sector, health sector and communication and media sector.