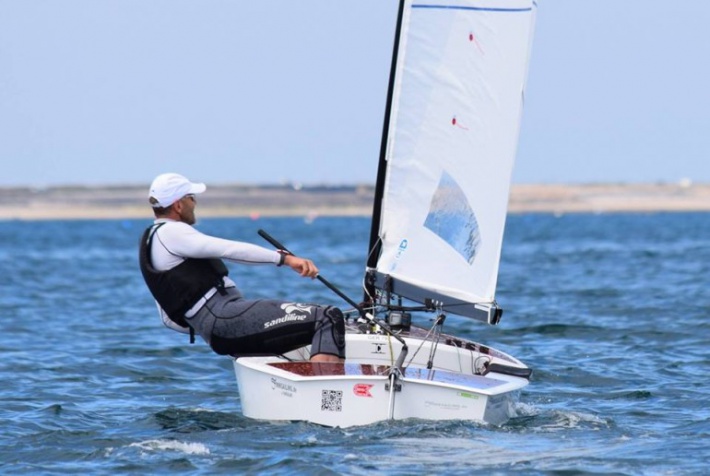 Allan Julie was crowned as the best sportsman for 2016 only a few days ago and he has now held the title a record seven times, a feat that many feel will take some time to be surpassed, although the man himself believes he can further increase this tally in the future.

At 39 years old, Julie had a great 2016, which culminated with him winning the 2016 African Laser Championship in December, which proved to be the deciding factor for his win.

As is tradition, Sports NATION looks to get a deeper conversation with the newly crowned sportsman and woman of the year and to kick off our series of interviews, we sat down with the seven-time winner himself, Allan Julie.

Sports NATION: It is now the seventh time you win this award, what does it mean to you?

Allan Julie: Firstly, for me it represents perseverance and sacrifices. It is difficult for an athlete to remain competitive for so long and I managed to do it. I am very happy.

Sports NATION: You are 39 years old and you were vying for the title against much younger athletes, what do you feel is missing in the young athletes so that they match your achievement?

Allan Julie: Firstly, it is discipline. Like right now there are many youths, especially the boys, who have a lot of potential to do well, but they lack a bit of discipline and guidance.

Sports NATION: You have had the chance to train abroad and locally. Do you feel overseas training is that important or is local training sufficient?

Allan Julie: Definitely, if you are training only in Seychelles, you won’t have much of a chance. You need to train overseas. I have trained overseas for a long time, almost 10-15 years and if I had trained only here, I’m sure I would have not won even one sportsman of the year title as in Seychelles we don’t have enough to train at a high level. Another thing I think is important is to have more investment in the athletes as there are no shortcuts to success.

Sports NATION: You spoke of sacrifices earlier, how much have you sacrificed to get to where you are today?

Allan Julie: Wow! There has been too much for me to think of. As I said, I’ve trained overseas for almost 15 years and in all that time I had only one woman in my life and I spent most of my time away rather than with her and I had to put off having children. As a matter of fact, I got my first child only four years ago. I spent Christmas either training or competing while my friends and family were enjoying. There have been so many sacrifices.

Sports NATION: Having claimed the sportsman of the year award seven times now, how has this brought changes to your life?

Allan Julie: There definitely is a change. Such as when you enter any sports venue, the public’s eyes are on you and you have to be at your best behaviour and have to be a role model and have a good public image.

Sports NATION: Has there been any moment when you found yourself struggling to maintain a positive image?

Allan Julie: No, not really. This is something that is already part of me, although I have consumed alcohol from time to time, when I’m training I never drink alcohol or go out to discos, as I know what I want and I always try to do my best to achieve my targets.

Sports NATION: So, what are your targets for 2017 then?

Allan Julie: This year I think there will be the African Championship once more and I will be aiming to win again, but the biggest decision for me this year will be to decide if I will compete in the 2020 Olympic Games in Tokyo. As I am still thinking about it and if I decide I want to, I will have to start training hard as early as possible.

Sports NATION: Do you think you can win the award for an eighth time?

Allan Julie: It all depends as there are years when there are big games, such as the Commonwealth and All-Africa games, in which sailing does not feature, it makes it more difficult for me to win, but if I get to compete at high level competitions, then you never know. It’s not impossible, but it all depends.

Sports NATION: When we look at sailing today, there’s not that many youngsters taking up the sport. What do you think can be done to get more young people to take up sailing?

Allan Julie: There is a lack of young sailors, as most of us are older and as a sailing instructor I can say it is very difficult. Last year I went to all the schools that are around town and I handed out about 30 forms and only had about 2 or 3 kids who showed up. I don’t know why they are not coming or if they have other commitments but we seem to only get primary school students, but none at secondary level. I don’t know if there should be some national development plan to help recruit more young sailors.

Sports NATION: Do you have any advice to the other sportsmen who wish to emulate your achievements?

Allan Julie: What I can tell them is to know what you want. Do not enter a competition with doubts on your mind. I recall the last Indian Ocean Island Games (IOIG), when we competed in the team racing. We were regarded as the underdogs, but we believed in ourselves and that’s how I learnt that having self-belief and removing your doubts is very important. You need to find ways to achieve your goals.

Sports NATION: Lastly, do you feel there are younger athletes who can match your achievements?

Allan Julie: Of course. Like Andrique Alissop. I feel he has a lot of potential, but he is young and a bit inconsistent. However if he strives for it and perseveres, though it will take a long time, he can achieve it.