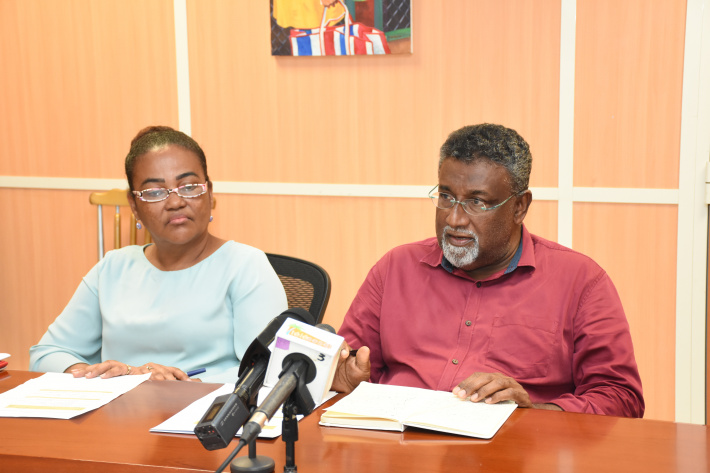 Mr Moustache and Ms Estico during the press conference

Local farmers and producers of livestock, eggs, fruits, vegetables, spices and crops (gro manze) are being classified in three categories namely commercial, semi- commercial and traditional producers to ensure they are better targeted in terms of support and assistance.

The initiative is in line with the work of the high-level committee on food security surveillance and the Ministry of Fisheries and Agriculture to ensure that farmers become more productive to continuously ensure food security nationally.

Meeting the press yesterday afternoon at the ministry’s head office at Maison Collet, the principal secretary for agriculture, Antoine-Marie Moustache and the chief executive of the Seychelles Agricultural Agency (SAA) Linetta Estico gave more details on the classification.

Mr Moustache noted that farmers have different capacity and capability to operate on any parcel of land.

He said in order to move forward it is now important to be able to give different groups of farmers different support especially if their capacity differ.

“In this case at a time where resources are limited, it will be important therefore for us to be able to come up with a classification system in order to better allocate support to farmers in their various production activities,” said Mr Moustache.

He said classification is based on farmers’ ability to produce and in Seychelles’ context they produce fruits and vegetables, crops, broiler chicken for meat, pork and eggs.

He noted that in order to establish their capacity and capability they have assessed the amount each farmer can produce.

Mr Moustache said they have looked for instance at the amount of produce they can put on the market monthly.

He said support will be based, among other criteria, on the period of time they have been in agriculture and the amount of loan they can access.

Ms Estico said there are over 500 registered farmers who are involved in different activities and each producing at different levels based on their investment/financial abilities and capacities, amount of resources that they can access as well as their abilities to manage their farms.

Ms Estico said all these aspects have been taken into consideration as the basis to establish the classification system.

Prior to that, she said, farmers were being assessed based on the level of production found on their farms but now the classification will be based on output.

Farmers and producers have been classified in the following categories:

Ms Estico further noted that various incentives have been introduced for those different groups of farmers based on their respective activities. She said the services the SAA offers have also been better targeted based on the specific needs of each of the different groups.

Furthermore she noted that traditional farmers are all those who are producing less that 500kg per month. There again she said there are incentive packages that have been worked out for these producers.

Giving details on the various incentive packages for the commercial, semi- commercial and traditional producers, Ms Estico explained that for commercial livestock and egg producers they can access a maximum credit line of R5 million from the Agriculture Development Fund (ADF). Before that the fund had a ceiling of R1 million accessible for all farmers across the board.

For those farmers producing at semi-commercial level in the above category, their ceiling is now R2 million.

Additionally Ms Estico said for producers in the commercial category their lease on state land have been extended to a maximum 30 years, for semi-commercial this will be 20 years while for traditional it will be 10 years.

She noted that presently the minimum lease period is 10 years.

Furthermore farmers in the traditional category will receive additional services including visits and monitoring from extension officers every week as well as a variety of seedlings at affordable prices.

Ms Estico noted that farmers and producers have been consulted on the classification system through the numerous farmers associations in the country.

Asked if the classification system has taken into account opening more markets for farmers to sell their produce, Mr Moustache noted they are convinced that the local market holds vast opportunities for farmers.

He said farmers have to come out and be more innovative when it comes to seeking new markets for their produce and they should also convince consumers that local fresh produce are better than imported ones while at the same time ensuring and maintaining affordable prices.