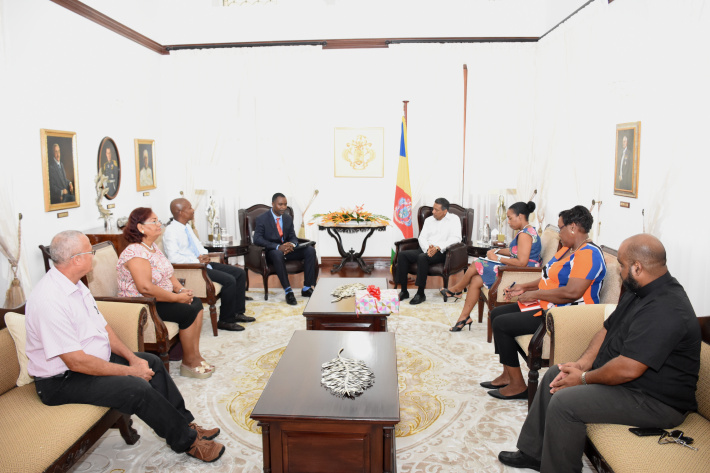 A delegation from the Seychelles Bible Society was yesterday afternoon received by President Danny Faure at State House and during the meeting the head of State was briefed on their achievements and future projects which include building a Bible House.

The society’s delegation was led by its vice-chairperson, Pastor Abel Ntep Ntep.

According to a communiqué on the State House website, President Faure expressed his appreciation to the Bible society for the invaluable work they are doing in the country and reiterated his full support for the conception of the Bible house.

The delegation also presented the president with a copy of their strategic plan for 2018-2022.

Talking to the press after their discussions with President Faure, Pastor Ntep Ntep said they briefed the head of state on their achievements during their few years of existence – their challenges, current and future activities.

“The main aim of our visit was to put before the president one of our major projects which is for us to have a Bible house here in Seychelles,” Pastor Ntep Ntep said.

He noted that such a centralised place, with a book shop, training centre, warehouse and offices among other facilities, do exist in other biblical societies.

“I would like to thank President Faure for giving us his word that he will help us to realise our project,” he further said.

Speaking on the society’s achievements, Pastor Ntep Ntep noted that apart from the completion of the translation of the Bible in Creole in 2015, the society has also produced a CD on the four evangelists (gospel) in the New Testament. He claimed that the society has conducted various bible trainings sessions in various organisations and this has continued with empowerment, follow-up and monitoring sessions in 2019 but in which the involvement of the youth was found to be missing.

“This year we have started a programme ‘Trauma healing for young people’,” Pastor Ntep Ntep added.

Mrs Maillet, who along with another staff runs the society’s office and bookshop in Victoria, said the training of trainers for the trauma healing sessions for the youth, has already started for students at the Beau Vallon secondary school. The programme trains the youth to fight and stand up against bullying, sexual abuse, physical abuse, domestic violence and drug abuse among other traumatic anti-social behaviours.

She added that the society will also be using the social media to train and pass messages, especially to the youth on the words of God to help them out of traumatic situations.

She stated that the society will be donating bibles to ministers and to female inmates at the Montagne Posée prison.

“We would like to see that all Seychellois get to hold on to a bible so they learn about the words of God,” she said, noting that the Creole translated version of the Bible is actually the bestseller in the bookshop.

The Seychelles Bible Society started in the late seventies when Anglican Bishop French Chang-Him convened a group of people from the three main Christian churches in the country at the time – Anglican, Roman Catholic and Seventh-day Adventist – for the purpose of translating the Gospels in the Kreol Seselwa language.