An unprecedented number of 70 fishermen and boat owners were present for the Fishermen and Boat Owners Association’s annual general meeting held recently at the STC conference room.

The highlight of the meeting was the extension of the mandate of the committee for another three months so that it can propose a new constitution under a new name – Seychelles Fishermen and Boat Owners Association.

Talking to our newspaper, Mr Andre highlighted that “the association through a few of its members has tried as much as possible to attend as many forums, workshops and seminars that one way or another affect fisheries and fishing communities, our contributions and experience are recognised, and today we find ourselves representing the fisheries sector on many boards and committees both locally and at regional level”.

FBOA is a member of the Seychelles Fishing Authority (SFA) board of directors, SEYCATT board of directors, SEYCATT grants committee, the vice-chair of the Co-Management Plan Implementation Committee, an accredited member of the Seychelles delegation to the Indian Ocean Tuna Commission (IOTC), the chair of the Fédération Pêcheurs Artisans Océan Indien and a member of the African confederation of small-scale fisheries professional organisations (COAPA).

Mr Andre also talked about the various initiatives and projects the FBOA has been involved in such as the preparation of a joint position paper in view of the negotiations of the new Sustainable Fisheries Partnership agreement and presented same to the European Union (EU) parliament in Brussels, Belgium on November 21, 2019 which is World Fisheries Day.

They have been at the forefront of negotiations with the finance department in view of proposed tax reforms.

Talking about the main challenges facing the sector, Mr Andre noted that “disunion among ourselves in the sector is our biggest setback. Often this is used against us by the authorities when there are important decisions to be taken. Also the lack of commitment from the members themselves who often find it easier to criticise those who are giving their time (pro bono) to make sure that we are being represented, rather than they themselves come forward and see what can be done to complement the work being done”.

Going forward, the FBOA has tabled some resolutions and amendments to update its constitution to allow it to continue in the roles that it has assumed innocently over the years.

“One is to change our name from FBOA to SFBOA. The letter ‘S' is for Seychelles and also to review our membership conditions, to allow for other associations around Seychelles to become associate members which would then make us the umbrella organisation role we had been assuming. It is important to note that it is not our intention to swallow those community based fishing organisations around Seychelles, but rather to have a platform that could unite us when there are national issues at stake. We will not interfere or meddle in their day to day running or activities, they remain independent when it comes to their projects, funding and decision making processes. Most have understood our intention, however there is still a bit of work to be done with some others,” explained Mr Andre.

Hence, the annual general meeting (AGM) has granted the existing committee whose mandate has ended, a three-month extension to review the entire document and present the full amendments at an extraordinary AGM of which the dates are yet to be decided.

“Now in 2020 we want to open up to a broader scope of members, apart from the local fisher associations we are even looking to invite boat charter operators, Seychelles flag industrial owners and conservation groups related to fisheries to become associate members, recreational fisher representative, for I believe this is the only way we can harmonise our efforts going forward,” concluded Mr Andre. 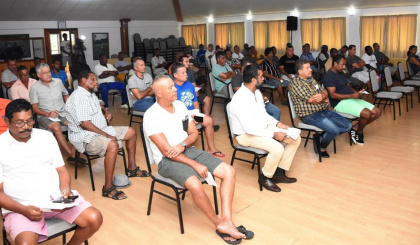