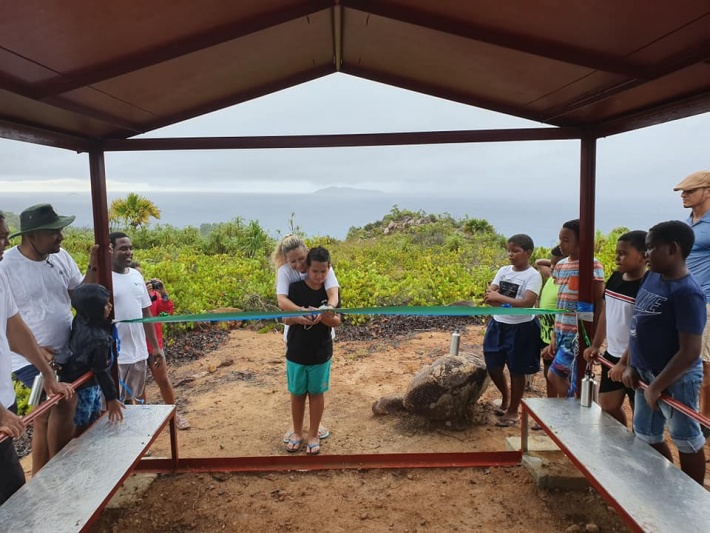 Renowned local poet Raspyek set the tone in his introductory remarks at the opening of the 40th anniversary celebrations on Curieuse Island with “40 years is not 40 months”.

For the past four decades, the government of Seychelles has had the protection of Curieuse, Port Launay and Baie Ternay Marine National Parks as well as Morne Seychellois and Praslin National Parks high on its priority list.

On Saturday June 15, 2019, four days after the official designation date, an excited crowd made the journey to join hundreds of resident giant tortoises to celebrate this important conservation milestone. The celebration began with an official ceremony, which took place at Baie Laraie, near the ranger’s headquarters. There were artistic presentations by students from Baie Ste Anne and Grand Anse Praslin primary schools and also from hearing impaired students from Au Cap school. The students’ performances were centered around the environment and its importance to the human race.

The chairperson of the Seychelles National Parks Authority (SNPA), Helena Sims, addressed the audience and explained the various projects that are ongoing in the national park. The Minister for Environment Energy and Climate Change, Wallace Cosgrow, also addressed the crowd and thanked the SNPA team for their hard work in protected area management. SNPA’s chief executive Selby Remy presented copies of the celebratory magazine produced to commemorate the 10-year anniversary of SNPA to Minister Cosgrow and Miss Sims.

Minister Cosgrow, along with Mrs Cedras (the wife of the late Atterville Cedras) were invited to unveil Atterville’s House, which serves as the rangers’ headquarters, (the largest building at Baie Laraie) and which pays homage to Mr Cedras, whose work contributed immensely to the management of Curieuse Marine National Park.

Those present then proceeded to view the exhibition which displayed the Curieuse development project and artwork by Takamaka students (produced in a workshop organised by SNPA and Bling Bling Poetry on World Environment Day). Also on display were information about the Leper Settlement, remains of which can still be found on the island.

Another highlight of the day was the re-opening of Anse Badamier Trail after extensive upgrade of its facilities such as the installation of new information boards and a kiosk. Experienced SNPA guide, Jason Bastille, accompanied the minister and other distinguished guests along the trail. It took the group about an hour to reach the kiosk (located at a 69m elevation) from Baie Laraie. Along the way, they managed to see the coco-de-mer and other endemic plants such as Kafe Maron and Bwa Ponm.

At the end of the hike, Miss Sims had the honour to cut the ribbon to officially open the new kiosk, which provides a panoramic view of Curieuse Marine National Park and the neighbouring islands.

On the extensive programme for the event were presentations on the Seychelles Paradise Flycatcher, where the public were taken on a guided tour along the plateau to view the flycatcher and to learn more about the conservation project. The tour was given by the project officer Dr Rachel Bristol.

Global Vision International (GVI), one of SNPA’s partners, gave an outdoor presentation to the public on the giant tortoise tagging programme. The public was also invited to participate in an exciting and educational treasure hunt. After 40 minutes of fun hunting it was an exuberant Henri Rose and team who discovered the long hidden treasure.

Despite the heavy weather, the invitees, staff, partners and the free ranging giant tortoises had a fun day celebrating 40 years of conservation. 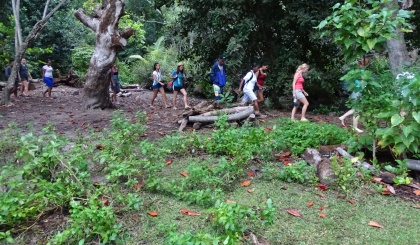 The Paradise Flycatcher tour on the plateau 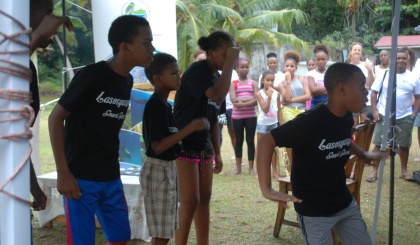 The hearing impaired kids during their animated presentation 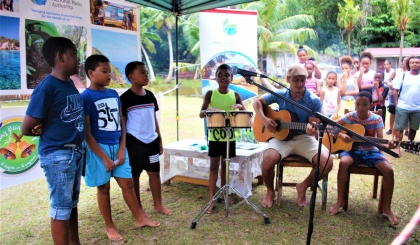 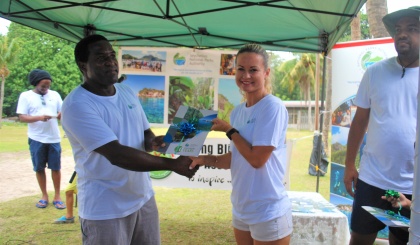 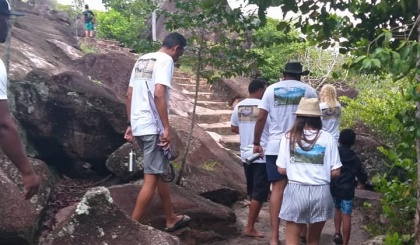 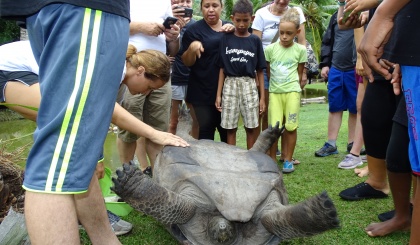 GVI showing the public how giant tortoises are tagged 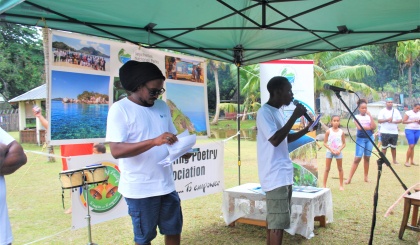