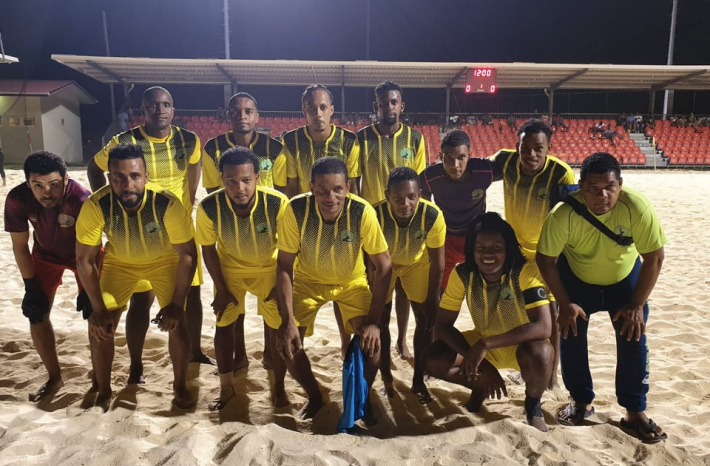 Anse Etoile-based Real Maldives have entered the lockdown period as champions of the national beach soccer league with two matches left on their schedule.

Since Monday March 16, the authorities have suspended all sports and fitness activities due to the universal outbreak of the coronavirus – COVID-19 – which has spread to Seychelles and until yesterday, six positive cases had been recorded.

Real Maldives entered the lockdown period on 37 points following their 13 wins and one loss out of 14 matches.

They are 12 points clear of second-placed Club Stormy Taka who have registered 25 points after 10 wins and three losses in their 13 outings.

The Takamaka side scored 77 goals and conceded 55.

The battle is now between Club Stormy Taka and third-placed One Stone for the runners-up spot, with both teams on 25 points after 13 matches.

In beach football, a win in regular time earns a team three points, while a win in extra-time carries two points. A penalty shootout victory on the other hand will earn a team only a single point.

Sunrise have entered the lockdown period in fourth position on 19 points from seven wins and seven losses from 14 matches, with 73 goals for and 70 against, one spot above Equator who are fifth on 16 points. They have recorded six wins – including one on penalty shootout – and seven losses, having scored 60 goals and conceding 61.

MLUH are presently sixth in the nine-team ranking on 15 points from five wins and eight losses, with 63 goals for and 65 against, ahead of Sorry who are occupying seventh place, also on 15 points.

Sorry have also accumulated 15 points from five wins and eight defeats, having scored 60 goals and letting in 64.

Vision and Beach Boyz are the two bottom clubs on the table with the former occupying the eighth overall spot on 15 points from five wins and eight losses in 13 matches, while the latter are carrying the weight of the league table without a point, following 13 defeats in as many matches.

They have scored only 43 goals, while conceding 96.