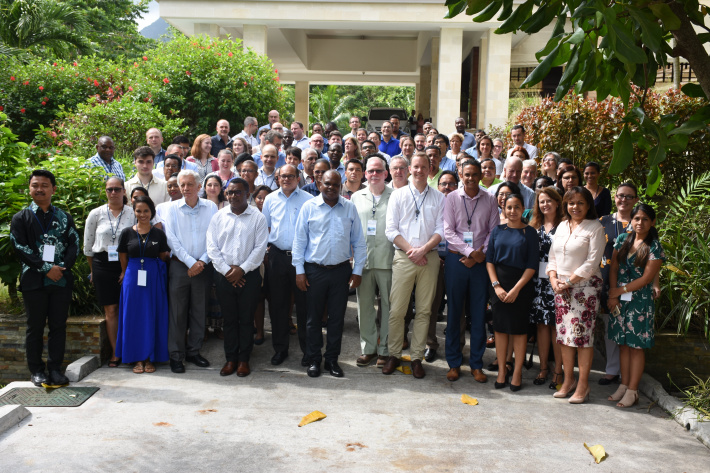 Delegates and guests in a souvenir photograph after the opening ceremony (Photo: Jude Morel)

Some 120 delegates coming from different parts of the world are currently attending the first meeting of the Basel Convention’s Plastic Waste Partnership hosted by the government of Seychelles.

This meeting is being held at the Savoy Resort & Spa and will end on Thursday February 5, 2020.

The conference has been organised by the secretariat of the Basel, Rotterdam and Stockholm Conventions (BRS) in collaboration with the Basel Convention Regional Centre for English-speaking countries in Southern Africa (BCRC South Africa), with generous funding support from the governments of Canada, Japan, Norway, Switzerland and Seychelles.

Tourism, Civil Aviation, Ports and Marine Minister Didier Dogley and the executive secretary of the Basel, Rotterdam and Stockholm convention, Dr Rolph Payet, were among the delegates.

During the last Conference of the Parties (COP) of the Basel Convention (which is one of the most comprehensive legal instruments on waste) in 2019 a landmark decision was taken on plastic waste. The decision was taken by the 187 Parties to establish a Plastic Waste Partnership (PWP) to mobilise business, government, academic and civil society actors to tackle the growing problem of plastic waste.

According to Dr Rolph Payet, to date, the Basel Convention is the only internationally legally binding convention dealing with the issue of plastic wastes. “And indeed the world is looking to us to work with governments and other stakeholders all over the world to address this global tragedy. Seychelles, a party to the Basel Convention, despite its unique natural surroundings and heritage, like many other small islands states and remote regions of the world is testimony to the fact that the impact of plastic wastes has reached even the most remote places on our planet,” said former Seychelles environment minister, Dr Payet.

He also talked about how plastic waste is one of the world’s greatest concerns.

“Thousands of tons of plastics are produced every year and less than 10% of plastics are recycled and the amount of plastics entering the ocean has now reached more than 150 million metric tons intoxicating our marine species and seabirds, and entering our food chain. A recent study in Europe found micro-plastics in bottled mineral water!” highlighted Dr Payet.

Plastic waste pollution can affect land, waterways and the oceans when dumped carelessly. The living organisms, particularly marine animals become vulnerable either by mechanical effects, such as entanglement in plastic objects, or by ingestion of plastic waste.

“The good news is that there is growing commitment from producers of plastics to recyclers. Many producers as well as recyclers are taking the lead, especially the new opportunities created by the Basel Plastic Amendments. Together with the Minister for Environment of Norway and NORAD, we are happy to announce the approval of a US $6.9 million project to implement the plastics amendments and to support developing countries in the implementation of the measures. We are also pleased to announce the establishment of a small grants programme initially geared towards the regional centres of the Basel Convention to support regional and national initiatives,” announced Dr Payet.

In his opening speech, Minister Dogley, who was standing in for Environment, Energy and Climate Change Minister Wallace Cosgrow, commended the Basel Convention for initiating this PWP.

“I feel comforted to see that there is a real commitment by the world community towards fighting this plastic curse at the global level. Plastic waste pollution is now one of the most pressing environmental issues of our time, as a result of the rapid increase in manufacturing. Our task to control and find a solution to beat this crisis remains a challenge,” said Minister Dogley.

In regards to the establishment of the waste partnership, Minister Dogley noted that it was high time that a legally binding framework is formed so as to ensure control and environmentally sound management of plastics. “Attempts have been made by several countries to abate the crisis with the main objective of eliminating plastics especially single use plastics. The UN has reported that about 127 countries have already implemented policies related to regulating plastic bags. Seychelles can be used as a model of small island developing states, taking unpopular decisions in curbing the issue of plastic waste. At the national level a series of measures targeting plastics and plastic population have been put in place,” Minister Dogley added.

He also acknowledged the efforts of the youth over the world in trying and supporting initiatives taken to try and combat plastic pollution.

A worldwide photography competition on plastic waste was also officially launched yesterday by Dr Payet, together with the British Broadcasting Corporation (BBC) and National Geographic explorer and broadcaster Paul Rose.

There will also be a series of activities which the working group will undertake and these will include a beach clean-up and site visits to various redeem centres and recycling facilities at Providence. 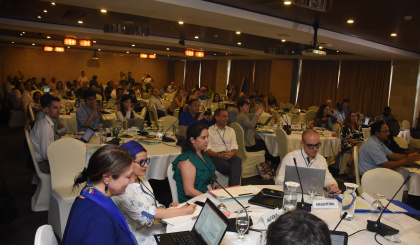 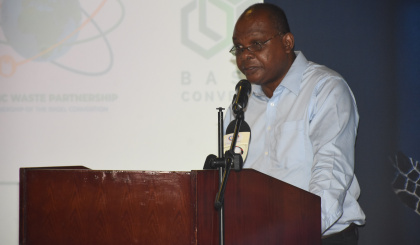