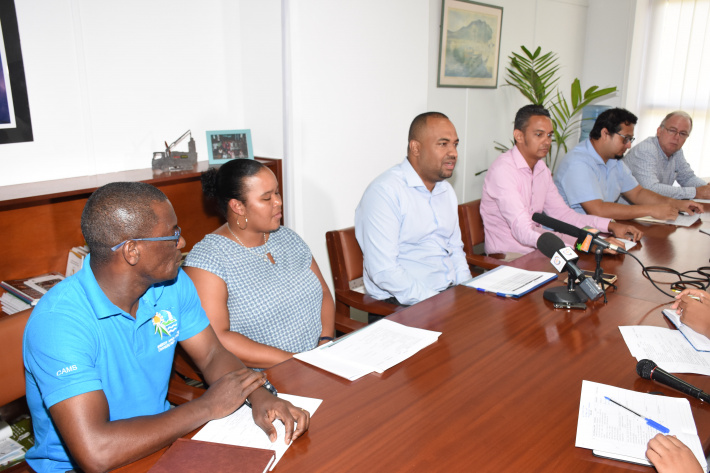 Minister Cosgrow and his officials during the press conference on Monday (Photo: Joena Meme)

The Ministry of Environment, Energy and Climate Change has given an update on the various announcements related to the environment, climate change and energy made by President Danny Faure in his State-of-the-Nation Address (SONA) last Thursday.

“One of the measures announced by the President was to have another plant for the manufacture of bricks in order to reduce the cost of construction. We have been in negotiation with another manufacturer and we are happy to announce today that the negotiations have been going well and somebody is ready to start the job. President Faure also talked about a series of measures that our ministry has to take in line with the different challenges we are facing with our coasts due to climate change. With the help of the World Bank, we made a Seychelles Coastal Management Plan 2019-2024 and we have already started to implement some measures. The changes have an estimated cost of US $15 million. The President also talked about the measures of waste management in the country as a whole and our ministry is already working on that,” noted Minister Cosgrow.

Do we have sufficient budget to implement all these projects, despite the budget having been already approved? Minister Cosgrow reassures the population that many of the projects were already considered in the budget and many are receiving international funding. “For example the drainage issues on La Digue will be financed by the Environment Trust Fund (ETF) which is outside the budget. The mandate of ETF is to finance projects related to environment only and this fund is being collected through utilities bills. This fund is managed by a board. Different coastal management projects are also being financed by Indian grants and other international institutions. The rest are measures/policies which we will put in place and which do not require funding,” explained the minister.

Talking about the reduction of carbon emission for environment protection and mitigating climate change, Minister Cosgrow added that “President Faure also announced that we are reviewing our target of renewable energy which was previously established in 2011. We have to produce 5% of renewable energy by 2020 and 15% in 2030. Now the new target is 30% by 2030 and 100% by 2050. It is quite ambitious but it is a target that we can achieve. If we achieve it, it will propel us again on the international front as a small island combating carbon emission. We need the contribution of all sectors in order to achieve this target and we all need to relook at our policies and set new strategies to achieve this target.”

With the climate change, since last year, Seychelles is suffering from coastal erosion mainly at Beau Vallon, Au Cap, Anse Kerlan, Amitie and Anse Gaulette among others. After a thorough study by the World Bank on this issue on our three main islands – Mahé, Praslin and La Digue – it has been noted that in order to implement some strategic measures to secure our shores, it will cost around USD 15 million.

“For now we have secured funding for USD 5 million from the French Development Agency for the implementation of the erosion control measures at Beau Vallon, Anse Kerlan, Anse La Blague, North East Point and Au Cap.

“Not all projects will fall under the MEECC as some will fall under the Seychelles Land Transport Agency. With the report done with the World Bank, there are 18 priority areas that we need to work on. There are some places where we need rock armouring or landscaping. We have to prioritise the areas and see the areas that are being directly affected,” noted Ms Simeon.

Talking about the progress in the finalisation of the Waste Management Plan, PS De Commarmond explained that “we started working on it with the assistance of European Union since last year. An international firm came to work with the government on that. We completed the plan and now we are waiting for the endorsement of EU and in the coming months, we will present the details of the measures which we will implement. The main emphasis of the plan is about how waste is being managed and processed in Seychelles. We are having consultations with the private sector and in March we will launch the programme ‘boutey ver’ (glass bottles) which will add on the already existing programmes. In our plan we are also considering the design of a third landfill. The volume of waste continually increases and we are looking at all possibilities for people to consider having recycling business. Moreover various types of bins with recycle options will be placed around the three main islands to help reduce waste that end up in the landfill.