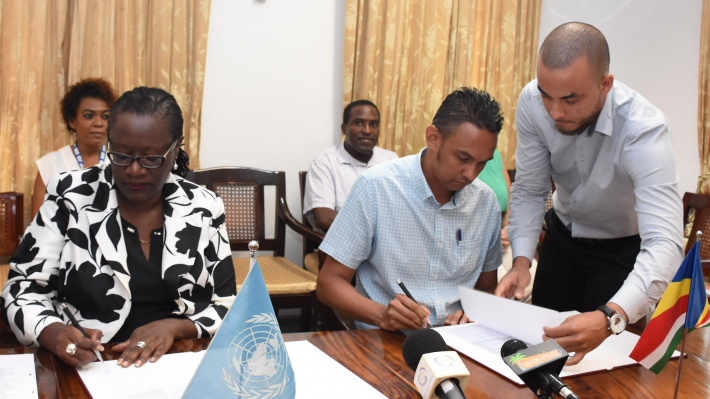 The Ridge to Reef project, to be implemented by the Ministry of Environment, Energy and Climate Change (MEECC), was officially kick-started yesterday with the signing of the project agreement by United Nations Development Programme (UNDP) resident representative Amanda Serumaga and principal secretary in the environment department of the ministry, Alain Decomarmond.

The six-year project, for which the total cost is around $31 million, is being partly funded by the UNDP Global Environment Fund (GEF) to an amount of $3,973,914, with the remaining capital to be co-financed by partners who include non-governmental organisations (NGOs) such as the Marine Conservation Society Seychelles (MCSS) and other entities such as the Seychelles National Parks Authority (SNPA).

UNDP resident representative, Mrs Serumaga, briefly explained the project, making note of the long-standing partnership with the ministry of environment and reiterating the UNDP’s support for future collaborations.

“UNDP has four ongoing projects with the ministry and going forward in 2020, we have six new projects and I think it’s worth understanding what this particular programme is about. First of all, it is going to focus on enhancing the management and conservation of not just agricultural eco-systems in the upland forest but also as well as coastal and marine eco-systems. And we often ask ourselves, well where are the people in these kinds of calculations in terms of preservation, biodiversity and environment and climate change issues and the idea about the project is that we need to have sustainable management of our eco-system and our biodiversity in order to guarantee some of the very livelihoods that people wish to live within Seychelles,” she explained.

“Let me close by reiterating UNDP’s readiness to continue our fruitful cooperation both with the government of Seychelles as a whole but also in terms of working with the ministry. I thank, through the PS, the entire ministry and welcome our collaboration with you once again,” Mrs Serumaga stated.

Furthermore, it has been designed to reduce threats to globally significant biodiversity by strengthening the country’s system of marine protected areas and reducing negative land-based impacts on those ecosystems, reverse land degradation in areas outside of formally protected areas and in productive land through the promotion of Sustainable Land Management (SLM) and Sustainable Forest Management (SFM) practices and agroforestry.

PS Decomarmond thanked the UNDP for their continued support on behalf of the government of Seychelles, noting that the signing of the project agreement is further testimony of the trust and inter-relationship between government and UNDP in moving forward with projects.

“The Ridge to Reef project has been a much awaited project for us in Seychelles, for not only the ministry but also the different partners. It is a very comprehensive project in approach, from the ridge, the mountain top down to the reefs and it is very wide in terms of activities, from the conservation of land in uphill areas and down to coral reefs, marine species for example of establishing temporal protected areas in the South of Mahé. This will be done together with the Marine Conservation Society Seychelles (MCSS) as well as preservation of some of the mountain tops which are not yet protected, we call them key biodiversity areas, this project will be one of the first projects that will be putting resources to give value and strengthen the areas but also to build further the case of future protection of these areas to increase the area that we have in terms of 47 percent of protection,” he said.

According to PS Decomarmond, the project will also cover areas of Praslin island and Curieuse, particularly through the SNPA and the Terrestrial Restoration Action Society of Seychelles (TRASS), an NGO committed to the restoration of degraded terrestrial sites in Seychelles.

Asides from hands-on work by the ministry and partners, the project has an important community-outreach component involving schools and the University of Seychelles (UniSey), for which resources have already been allocated.

The tourism sector is also expected to be directly positively impacted by the project. With PS Decomarmond noting the possibility of different locations and sites to in future become eco-tourist attractions.

The project is currently under implementation by the Project Coordination Unit (PCU) established by the MEECC. An inception workshop is scheduled to be held on February 28.