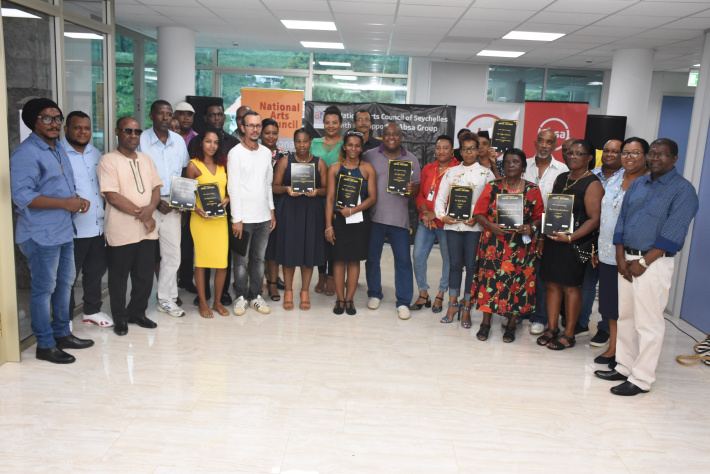 The winners in a souvenir photograph with guests (Photo: Jude Morel)

Winners of the second Seychelles Arts Award which took place on November 23, 2019 at the International Conference Centre (ICCS) have received their prizes.

The group of artists who outperformed the rest of the nominees in their respective art forms and those who went great lengths throughout their lives to advance the development and uphold our cultural values and traditions, received their prizes during a small ceremony held at the culture department, Maison Esplanade on Friday afternoon(20.12.2019)

As prizes, apart from the trophy received on the night of the event, the artists received cash prize of R25,000, a certificate and a token from main sponsor the Absa Group.

It is to be noted that Marie-Madeleine Matombe and Egbert Marday clinched the female and male Life Achievements Awards respectively in recognition of their remarkable efforts and initiatives to protect and preserve our cultural and traditional values and different art forms.

Mrs Matombe, 87 years old, was rewarded for years of effort in promoting the traditional romance and kanmtole, especially in her own district of Anse Boileau while her compatriot, Mr Marday, a sculptor and full-time artist, was recognised for promoting the arts in Seychelles. They were presented with their prizes by the chief executive of the National Arts Council (Nac), Jimmy Savy.

Present at the small presentation ceremony were the principal secretary for culture, Cecile Kalebi; the chairperson of the awards committee, John Etienne; sponsors and board members and staff of Nac.

The Local Honorary Award went to Marcel Rosalie, who passed away recently, and his prize was collected on his behalf by his daughter Antoinette Rosalie. Well known Mauritian singer and musician, Daniel Delore, was awarded with the International Honorary Award for striving to promote Seychellois musicians and our music internationally and his prize will be forwarded to him. A minute of silence was observed for Mr Rosalie on his passing away.

The next Seychelles Arts Award will be held on April 21, 2021 and the poster of the award was unveiled by Mr Savy and Mr Etienne. Mr Savy congratulated the awardees and urged them to be role models and inspirations for other upcoming artists and also to carry on with the good work that they are doing to promote Seychelles arts.

The Seychelles Arts Award was divided into 19 categories covering different art forms practiced by local artists and these were divided into 3 main sections with the first (12 awards) as open competitive awards. The second section were Jury Awards (five) on lifetime achievements of artists and the third also a jury decided section, which honours people who are not necessarily artists but who helped in art and culture development. 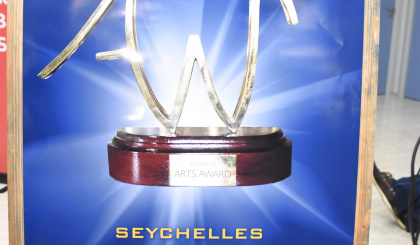 The poster for the next Seychelles Arts Festival (Photo: Jude Morel)