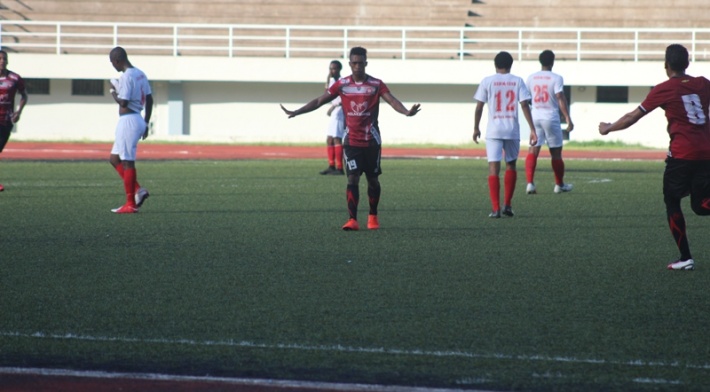 It was a goals galore weekend in the Transitional league for first division teams as a total of 19 goals were scored in four matches.

St Michel squeezed past Red Star Defence Forces 2-1 at Stad Linite on Saturday afternoon while on La Digue, Côte d’Or breezed past Anse Reunion 2-0 and on Praslin, LightStars tore apart Revengers 8-0 in the biggest win this season thanks to a hat-trick by Malagasy Paul Bruyelle. On Friday evening, St Louis got a hat-trick from their new Malagasy striker Georges Kalo as they swept aside Victoria City 5-1 at Stad Linite in a goals galore weekend.

St Michel kept pace with the leading pack in the Transitional league for first division teams on Mahé with a hard-earned 2-1 victory over Red Star Defence Forces on Saturday afternoon at Stad Linite in a match which kicked off seven minutes late as both teams were wearing their red jersey but eventually Red Star Defence Forces, who were the away team had to change their strip to white.

St Michel started strongly in this eastern clash despite missing several of their key defenders through injury while their opponents were at full strength as they welcomed back their national team players who were at the Cosafa Cup.

The players of coach Nigel Moustache should have taken the lead as early as the 2nd minute from Malagasy Hassan Aly’s lofted free kick which fell invitingly to Nelson Laurence who had sneaked in at the far post but he could not direct the ball on target.

St Michel though went ahead nine minutes later as Malagasy Oliver Livakely went on a darting run in the Red Star Defence Forces half and then teed up his countryman Evariste who adjusted himself before unleashing a rasping shot from 30 metres out which bounced awkwardly and flew past goalkeeper Jerome Dingwall’s desperate dive to make it 1-0 as the army team’s custodian crashed into the post and injured himself and had to receive treatment.

Dingwall though had to leave the pitch in the 18th minute through injury and in came Andrick Hortence but the reserve goalkeeper could not stop his team from falling further behind in the 24th minute when Daniel Maillet gave the ball away to Evariste who then played a perfectly weighted pass to Livakely who burst through into the penalty area to rifle the ball into the bottom corner to make it 2-0.

Red Star Defence Forces tried to get back in this match in the 25th minute from a mistake by Yannick Julie who lost the ball to Marcus Maria who fired a left footer at St Michel goalkeper Alvin Michel from the edge of the penalty area and he saved well.

St Michel though looked the more dangerous and in the 26th minute Livakely linked up with Norris Bibi who showed some great skill before he shot at goalkeeper Hortence who turned the ball into corner.

From the resulting corner, floated by captain Aly, the ball dropped to the feet of defender Yannick Manou who controlled well to elude a challenge and blasted at goal but his shot was diverted into another corner.

In the 43rd minute, Bibi picked the ball on the half way line and ran at the Red Star Defence Forces defence and was stopped in his stride by Malagasy defender Nehemia who was booked by referee Bernard Camille as St Michel ended the half strongly with a 2-0 lead.

Red Star Defence Forces though reduced the deficit four minutes after the restart when defender Ramely Pascal failed to cut a pass to Maria who sent in an inch-perfect cross and Darrel Damoo rose unchallenged to head powerfully into the net to make it 1-2.

Two minutes later, the speedy Damoo threatened again as he latched onto a long ball by captain Rashim Padayachy but goalkeeper Michel was quick off his line to clear the danger.

In the 66th minute, Maria played a free kick over the St Michel defence to defender Darrel Lesperance at the back post who volleyed straight at goalkeeper Michel as the players of coach Nigel Freminot tried to level matters.

St Michel managed to break forward in the 81st minute after soaking plenty of pressure in this second half as Livakely went on a mazy run but went down in the penalty area under the challenge of Red Star Defence Forces substitute, Malagasy Michel Nambintsoa but referee Camille did not feel it warranted a penalty.

In the 85th minute, substitute Barry Marie played a free kick at the near post which was met by another substitute Laurel Ladouce whose glancing header flashed across the face of the St Michel goal and out of play.

Red Star Defence Forces though were denied a clear penalty in the third minute of added time when Malagasy Clariel’s long range shot came off the arm of St Michel substitute Selwyn Cesar but referee Camille was not convinced as St Michel held on to a narrow 2-1 win to maintain their unbeaten run and inflict a fourth defeat on their opponents in this competition.

St Michel manager Andrew Jean-Louis was quite pleased with his team for this hard fought win where he also felt the officiating could have been better.

“It was important to win this match to maintain our unbeaten run as well as keep pace with the leading pack and today, we started well and should have scored more goals in the first half though we grew complacent in the second half where we allowed our opponents to come at us but we managed to resist their challenge in a match where the officiating could have been better but we are happy with the points,” the St Michel manager said.

As for the Red Star Defence Forces coach Freminot, he was very disappointed with his players for a poor showing especially in the first period.

“I’m quite disappointed as we showed too much respect to our opponents in the first half and conceded twice and then we tried to get back in the match but we did not play to our potential though I also feel we deserved a penalty late on which unfortunately was not given,” claimed the Red Star Defence Forces coach.

Gran Kaz champions St Louis took time to carve open the 2018 second division champions as they took the lead on the half hour mark through striker Elijah Tamboo to make it 1-0 and in the 44th minute defender Jude Nancy made it 2-0 before Kalo added a third in added time for a 3-0 score at the interval.

Kalo completed his hat-trick in the 70th minute as he played a one-two with Tamboo before shooting at goalkeeper Bijoux who spilled the ball and Kalo had a second bite of the cherry to score and make it 5-1 – a result which delighted coach Michel Renaud who told Sports NATION that the aim was to score plenty of goals and maintain their winning run.

As for City coach Steve Herbots, he said his team had to defend for long periods in the first half but opened up in the second period but they were undone by individual mistakes that were punished by their opponent.

Malagasy Kassah and Randolph Lesperance scored the goals for the defending league champions to help them to a comfortable victory over the players of Basil Hoareau.

Airtel Cup champions LightStars tore apart their neighbours Revengers 8-0 for the biggest win this season in the Inner island league on Saturday afternoon at Stad Amitié.

Malagasy Paul Bruyelle opened the floodgates early in the first half as he went on to complete his hat-trick before half-time with two more goals whilst his colleague Mario Ravo also got on the score sheet for a 4-0 score at the break.

LightStars added four more goals in the second period through a double by Lenny Barbé and one apiece by Ian Vel and Fabio Lemiel for a landslide 8-0 victory for the players of coach Ted Esther.