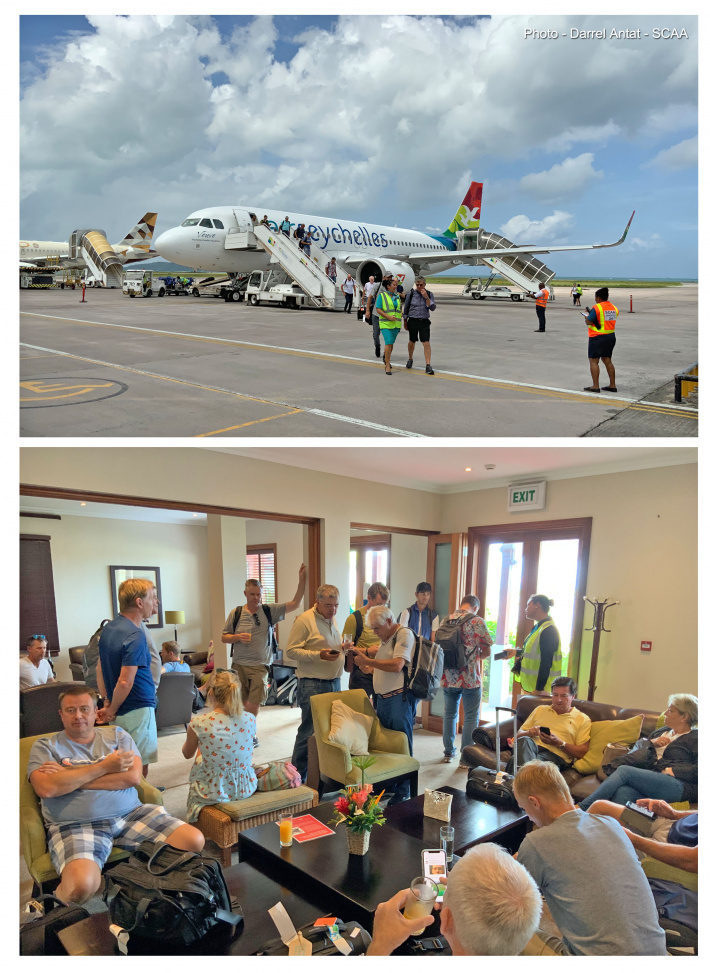 The golfers at the Seychelles International Airport (Photo: Air Seychelles)

Over 60 passengers including 48 golfers, sponsoring officials from Mauritius Commercial Bank (MCB), and Staysure Tour partners landed at the Seychelles International Airport at Pointe Larue on Tuesday for the second leg of the MCB Tour Championship 2019, scheduled to be held at Constance Lemuria in Praslin.

The competition started yesterday and will end on Saturday December 7, 2019.

The passengers due to arrive in the Seychelles on Monday on another airline from Madagascar were unable to travel as the airline did not operate the flight. To ensure the tournament commences on time, Air Seychelles quickly organised to operate the charter flight between Madagascar and Seychelles.

The celebrity golf players including winner of the first leg of the MCB Tour Championship, Barry Lane, voyaged on board Air Seychelles Airbus A320neo aircraft following an intense three-day competition in Madagascar, the first location for this year’s MCB Staysure Tour.

Upon disembarkation, the guests were treated to a warm welcome jointly by the Air Seychelles ground handling team and colleagues from the Seychelles Tourism Board (STB) prior to proceeding in the Air Seychelles VIP lounge and on board the airline’s Twin Otter aircraft to the island of Praslin where the next phase of the competition will take place.

Other organisations involved in ensuring a smooth transfer at the Seychelles International Airport included staff members from the Seychelles Civil Aviation Authorities, Seychelles Revenue Commission, the immigration department and the Seychelles police force.

Air Seychelles’ chief executive Remco Althuis said: “It has indeed been an immense pleasure to once again welcome the golfers and partners this time on board our new Airbus A320neo aircraft.

“I am happy that even at the last minute we managed to work out everything as planned and for that I would like to thank all the staff members who were heavily involved in making this charter flight successful as well as all the partners.”

Speaking of this very opportune event for the destination, Sherin Francis, STB chief executive, stated that the STB’s collaboration at the MCB Tour Championship is in line with its marketing strategy to increase the destination’s visibility.

“The event’s success last year has been extremely beneficial in bringing Seychelles to every corner of the world. It was a proud moment for the destination to see our small paradise acclaimed as one of the most beautiful courses in the Indian Ocean,” said Mrs Francis.

Aside from the title sponsor MCB Seychelles and Constance Lemuria, the MCB Tour Championship is being supported with contributions from the Staysure Tour, the STB, ISPC Seychelles, Hugo Boss, Cat Cocos, Takamaka Rum, and Seychelles Breweries, all actively working towards making the second golf tournament in Seychelles an enormous success.