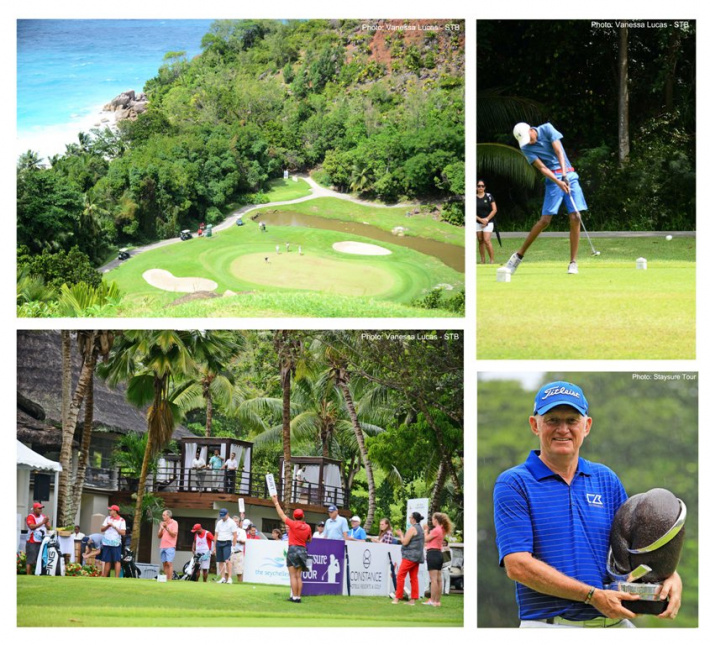 The land of the Coco-de-Mer will be featured as the second leg of a three-destination competition for the destination’s second participation at the prestigious regional golf competition, the MCB Tour Championship.

Set to start today, Friday November 29, 2019 and run until Sunday December 1, 2019 in Antananarivo in Madagascar, the competition will be returning for a second time to Constance Lemuria on the island of Praslin in Seychelles from Thursday December 5, 2019 to Saturday December 7, 2019.  The season finale will be taking place at Constance Belle Mare Plage in Mauritius from Friday December 13, 2019 to Sunday December 15, 2019.

Forty-eight players including defending champion Roger Chapman, his counterparts Clark Dennis and Paul McGinley and other golf celebrities are expected to tee off the Constance Lemuria par -70, 18-hole golf course that spans over an area of 5,580 metres on Thursday December 5, 2019 for three days of intense competition in Seychelles.

The Pro-Am, which will be played on Wednesday December 4, 2019, will be composed of 48 teams, each comprising one professional golfer and one Seychelles resident amateur including junior players and lady golfers.

Speaking about the MCB Tour Championship – Seychelles, Seychelles Tourism Board (STB) chief executive, Sherin Francis, expressed her satisfaction that the event has contributed considerably in providing visibility to the destination, especially Praslin.

“Since we opened our shores to the MCB Tour Championship last year, it is clear that the visibility received by the destination was worldwide. Our partnership in the event is even more justified today as we see the increase in the number of players for the event, implying that the interest for our destination has also increased. We are looking forward to a successful event in Seychelles,” said Mrs Francis.

She also mentioned that being part of the event is part of STB’s marketing strategies to increase the destination’s visibility and promoting Seychelles as a sports destination.

Mrs Francis further expressed her profound gratitude to all the local sponsors.

Aside from the title sponsor MCB Seychelles and Constance Lemuria, the MCB Tour Championship is being supported with contributions from the Staysure Tour, the STB, ISPC Seychelles, Hugo Boss, Cat Cocos, Takamaka Rum, and Seychelles Breweries, who are actively working towards making the second golf tournament in Seychelles an enormous success.

Bernard Jackson, managing director, MCB (Seychelles) said: “For the second year running, Seychelles is thrilled to host the pro golfers competing in the European Senior Tour. We celebrate our renewed international visibility on the golfing scene and are delighted that this year Madagascar also gets its share of the limelight with its inclusion in the tour alongside Mauritius and Seychelles. I thank the Seychelles Tourism Board and all the contributing partners for making this event a resounding success.”

Adding to the prestige of Seychelles’ leg is the breathtaking view of the white sandy beach of Anse Georgette, which will not fail to capture the player’s attention.

In view of the safety and security requirements, members of the local organising committee will be asking for the cooperation of members of the public to refrain from using the footpath accessing to the Anse Georgette property during the four-day tournament.