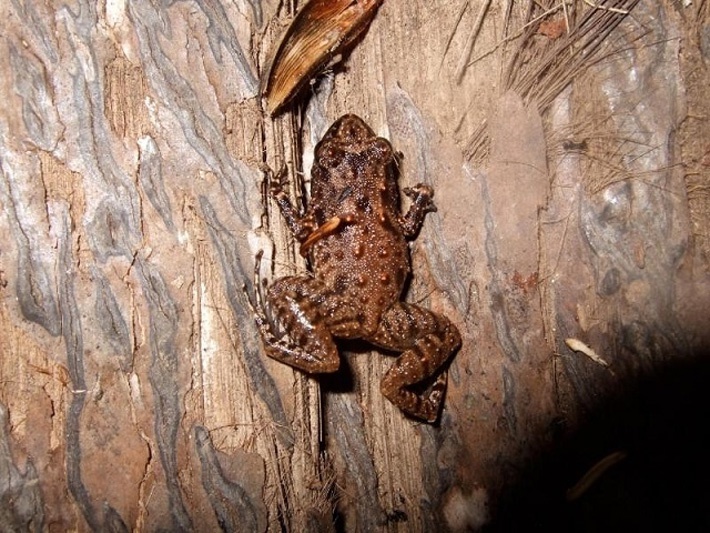 A frog endemic to Seychelles will be monitored through a new project set up by researchers from the Seychelles Islands Foundation.

The project will monitor the absence and presence of the endemic Seychelles Frog (Sooglossus sechellensis) found in the Vallée de Mai -- one of the Seychelles World Heritage Sites -- located on the second most populated island of Praslin.

Jennifer Appoo, the Foundation’s science and projects coordinator, told SNA that the researchers will monitor the frogs by listening to their vocalisations using an equipment called a song meter.

“Once deployed, song meters record at regular intervals all sounds in the surrounding environment. Song meters can record over periods of days to months and even years and need only be checked as often as required. We will also be deploying small data loggers to be left in the field permanently. These will record temperature and humidity on an hourly basis,” said Appoo.

The Seychelles frog is a tiny frog, with males reaching a maximum length of just 15 millimetres. It is listed as endangered by the International Union for Conservation of Nature (IUCN) Red List. The species can be found on the main island of Mahe, Praslin and Silhouette, the third-biggest island, from 150-991 metres above sea level.

Appoo said the reason behind the project is because little is known about the family of the sooglossid frogs found in Seychelles and the baseline data about their population. Furthermore, the archipelago in the western Indian Ocean possesses endemic amphibians of global significance and of high conservation value.

“This project is also therefore aimed at increasing understanding of sooglossid ecology and the environmental requirements of each of the four species,” said Appoo.

Seychelles is home to 13 endemic species of amphibian and these include seven caecilians and six frogs. Due to the extended isolation of the species and occurrence on just a handful of the inner granitic islands, the amphibians are globally significant and of high conservation value.

The project developer, Jim Labisko, who recently completed his PhD on the Seychelles’ sooglossids, said that there is no end date for the programme as the frogs and their environmental conditions should be monitored permanently.

“For example, if climate change causes frogs to move to higher elevations, or if a disease arrives and causes a population to decline or become extinct, we need to know when this is happening as it may give us the early warning that we need to prevent the loss of these endangered frogs from the Vallée de Mai and other sites across Seychelles,” said Labisko.

He added that “permanently monitoring frog behaviour and environmental conditions provides us with the opportunity to act for the benefit of not just the frogs but also other Seychelles endemic fauna and flora. We can use the data we collect as a signal to address concerns and adapt conservation efforts as they change over time.”

While monitoring is taking place Labisko said that it is imperative to identify the threats and prey to the sooglossid frogs.

“This includes habitat loss and alteration as well as the introduction and spread of non-native vegetation, invasive animals like yellow crazy ants, and pathogens such as the chytrid fungus and Ranavirus, both which are present in neighbouring Madagascar and have wiped out amphibian species and populations across the globe,” he said.