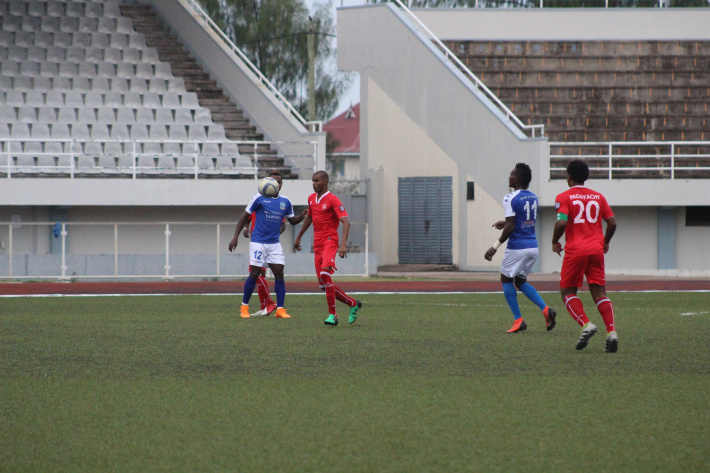 Praslin outfit LightStars inflicted further misery on struggling Red Star Defence Forces to beat them 4-1 at Stad Linite on Wednesday afternoon in a SeyPearl Premier League encounter as they suffered their fifth loss in as many matches.

LightStars started this army team’s downfall late last season when they defeated them in the penultimate league match to deny them the league title and they returned to haunt them in a match where they showed their intention early on such as in the 12th minute from Gerald Basset’ cross to Malagasy Paul Bruyelle whose shot was stopped by goalie Japhet Bijoux at the second attempt.

A minute later, Renick Esther should have done better when he picked up a loose ball after defender Michel Souris slipped but he fired wide this clear opening.

The much travelled striker though made amends in the 15th minute as he rose higher to guide Malagasy Mamy Rakotondrina into the bottom corner past goalie Bijoux for a 1-0 lead.

Andrew Onezia almost levelled the score in the 18th minute as he bore forward and as the LightStars defenders hesitated allowing him to race on goal but his shot was blocked by goalie and LightStars captain Romeo Barra.

The players of coach Ted Esther doubled their lead in the 27th minute after Joel Esther released Bruyelle who showed great skills to skip past three defenders to stab the ball into the far corner to make it 2-0.

Red Star Defence Forces almost gifted their opponent two more goals early in the second period especially Darrel Damoo whose poor back pass fell to Renick Esther but he shot across the face of goal in the 53rd minute.

A minute later, Renick Esther collected a long goal kick from captain Barra which he laid off to Bruyelle whose stinging shot was parried by goalie Bijoux.

On the hour mark, Red Star Defence Forces shot themselves in the foot again when captain Rashim Padayachy gave the ball away to Bruyelle who showed his pace to ghost apt defender Laurel Ladouce to thump the ball via the cross bar into the net to make it 3-1.

Red Star Defence Forces though kept probing and was hard done in the 72nd minute when referee Kerens Yocette did not blow for a blatant push by LightStars Malagasy defender Noelson Jeannot on his countryman Tojo on the penalty edge.

Four minutes later, Red Star Defence Forces again lost the ball on the penalty area and substitute Lenny Barbe threaded the ball to Malagasy Mario Ravo whose burst of speed was illegally halted by substitute Errol Bacco who tripped him to give away a penalty.

Ravo dusted himself off to send goalie Bijoux the wrong way to round off a 4-1 victory which adds to the army team’s disastrous start to the new season but their manager Philip Barbe was adamant that his team will soon get back on track when he spoke to Sports NATION.

“It was not a bad performance but we are still making too many mistakes to gift our opponents goals but we will get back to our old self soon as we are confident we will improve our results,” the Red Star Defence Forces manager said.

For his part, LightStars coach Esther was very happy with this result against one of the top teams in the league.

“We are very satisfied with our performance and more so with the result though our opponent played much better than in their last match on Praslin but we took our chances and we are now among the teams close to the league leaders,” the LightStars coach related to Sports NATION.