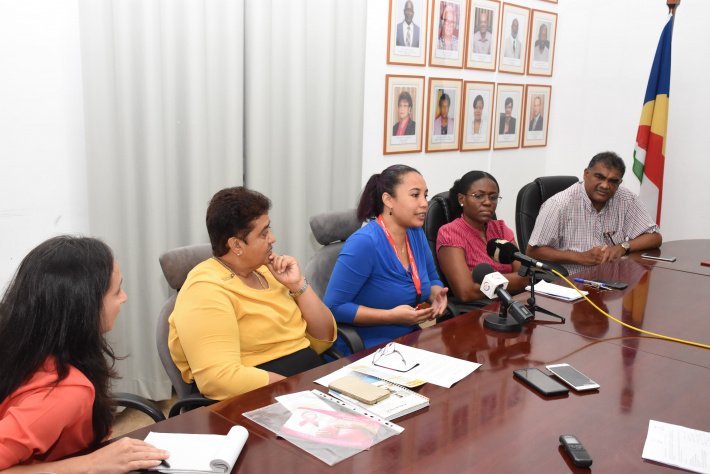 October is cancer-awareness month and since the beginning of the month, numerous activities have been organisedwith the aim of raising awareness about the disease, raising funds for associations helping cancer sufferers and educating the public as to prevention, detection and treatment of cancer.

The Ministry of Health on its part has also organised numerous screenings among other activities for this month, in addition to what is offered in health facilities across the country.

Furthermore, Ms Finesse noted that cancer among children is on the rise with the registry recording 19 cases of cancer in children aged 0-14 years. Of the 19, 7 sufferers have since passed.

According to Ms Finesse, during the past year prostate cancer, breast cancer, colorectal cancers and cervical cancer have been the most diagnosed types of cancer as well as lung cancer, which seems to have increased as compared to previous years.

According to the health professionals there are numerous factors that contribute towards cancer including persons from families with a history of cancer, persons who are obese, persons with poor diets, persons who consume tobacco and alcohol as well as others who may be at risk through their occupation, for instance, petrol attendants who breathe in toxic fumes regularly.

On a more general note, Ms Finesse attributed the increase in cancer to better diagnosis and to an ageing population.

“If you have an ageing population, it is likely that the incidence rate is higher,” she noted.

She noted that surgery is available but this is not suitable to all types of cancer, nor different stages of the disease. When surgery is not an option, patients are treated through chemotherapy which involves injecting medication into the veins. Other modalities include the Human Papiloma Virus (HPV) vaccine given to young girls, radiotherapy through a controlled dose frequently and immunotherapy. Immunotherapy also involves injecting medication into the affected organ or body part.

Dr Reginald noted that cancer is often diagnosed once it is in advanced stages such as stage three and stage four, the stages at which it is more aggressive.

“One thing which is important is for an individual to know their body. Someone can diagnose themselves if they know their bodies and notice something abnormal,” he said advising that individuals should consult health professionals whenever they notice any abnormalities in their bodies.

Ms Shroff explained that cancer cells are cells that are resistant to the body’s defence system and which can reproduce at a faster rate than normal cells.

“So the function of the cell is not normal. For instance, it can change its metabolic rate and multiplies faster and develops into a cancer. What is important is that we do not expose ourselves to risks that increase chances of developing cancer,” she stated.

The Ministry of Health has provided training for improved data collection on cancer from all health centres. An American professor is expected to arrive by the end of the month to train nurses and other health professionals.

The ministry has also been conducting an education campaign during the month of October on cancer. This year, they partnered with Cancer Concern Association, Soroptimist International Club of Victoria and the female members of the National Assembly.