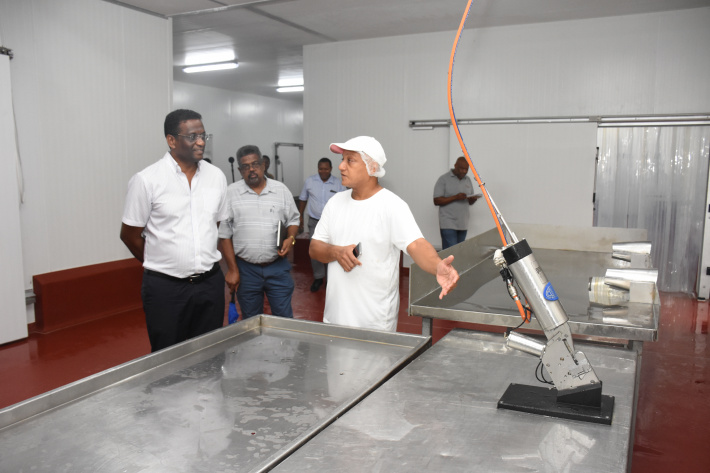 Minister Bastienne being led on a tour of the abattoir

The Minister for Fisheries and Agriculture, Charles Bastienne, has said he is very satisfied with the recently renovated chicken slaughterhouse at the Ferox Abattoir, Le Rocher, albeit after a four-month delay.

The minister said this following a visit yesterday morning to the abattoir, precisely the poultry slaughtering section.

The chicken slaughterhouse was closed down in February this year for major renovation after it was found to be in a dilapidated state and falling apart. It has since re-started its operations two weeks ago.

“I visited the abattoir when it was in operation prior to its renovation and it was in such a bad state that I wanted to get it closed at that time,” remarked the minister.

“It was in a state that people were not happy about it. As the abattoir was part of our ministry’s comprehensive strategic plan, we discussed the matter with the owners and this is the result of the discussion,” Minister Bastienne said.

Minister Bastienne was accompanied on the visit by the principal secretary for fisheries and agriculture, Antoine-Marie Moustache; the chief executive of the Seychelles Agricultural Agency, Linetta Estico; the chief executive officer of the National Bio-Security Agency, Mark Naiken and other staff from the ministry and from the two agencies.

They were guided on a tour of the whole poultry slaughtering process by the owner of Ferox Abattoir, Neville Adeline, and abattoir manager Gustave Azemia. The visit started at the receiving end and resting place of the live chickens, followed to the hanging or shackling area, the pre-slaughter electrical, stunning section, the conveyer de-blooding belt, chicken feather removing machine, the de-heading and removing and separating of the body content process, followed by the washing, cleaning, dripping and packaging and lastly to the chilling process.

Minister Bastienne said that there are plans in the ministry’s strategic plan to boost chicken production in Seychelles to meet the local demand which stands at 4500 tonnes per year.

Last year only 650 tonnes (14%) of chicken were produced for the local market. He said a third abattoir will be built to cater for the increase in production as the plan is to increase the production demand to 50% in the next three years. Minister Bastienne also said that local farmers are given a subsidiary of R2.30 per kilogramme of chicken produced to encourage them to go into chicken rearing.

Mr Azemia said the place is now more hygienic, with the different sections separated from each other, while also providing a more conducive working environment for the four local and fourteen foreign staff members.

He noted that the abattoir can cater for the slaughtering of 10,000 chickens on operating days – Monday, Wednesday and Friday – but has, since its opening two weeks ago, been getting only around 2700 chickens for slaughter on those operating days.

Mr Azemia noted that the Ferox abattoir is seeking to meet its production capacity but one of its main challenges is labour.

He explained that Ferox Abattoir is seeking to employ more workers locally or internationally if the local market can’t provide the work force, to meet the production target.

He also said the abattoir will automatise some of its production lines in future.

The Ferox Abattoir, which also consists of a slaughterhouse for red meat (cows, pigs, goats, etc..), is part of the Ferox group comprising an animal feed factory, a pig farm, a chicken hatchery and a chicken farm. It is among only two such abattoirs in Seychelles, precisely on Mahé, at the moment.

The slaughtering process starts as early as 4am with the resting of the birds before they are slaughtered three hours later to gain maximum quality.