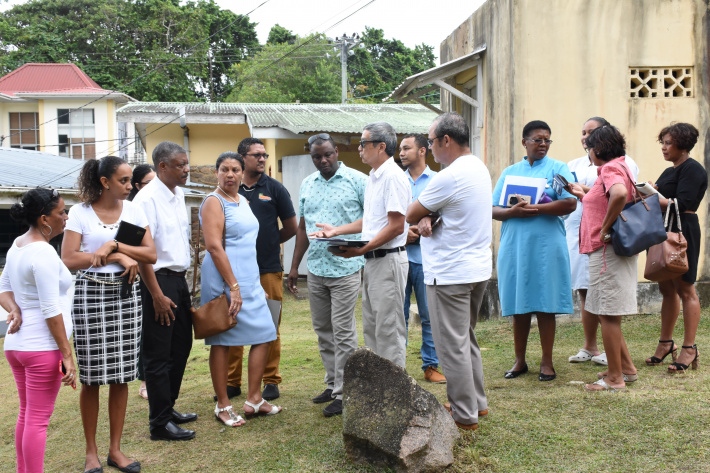 The delegation during the site visit on Monday

Baie Lazare residents have been reassured that the government is still planning to go ahead with the construction of a new health centre for the district.

The reassurance came on Monday when the member of the National Assembly for Baie Lazare, François Adelaide, met representatives of the Ministry of Health to get an update on the project which has been on the cards for a few years now.

“It has been a few years since we are talking about this project and our citizens want to know the status of the project. After listening to the explanations given to us, there is hope. Now it stays with the Ministry of Health to deliver on time and keep its commitment. We hope by mid next year we will see the start of construction of a new building. It was about high time that the residents of Baie Lazare get a modern clinic. Baie Lazare is becoming a district with a lot of activities and development going on. We have many tourist related businesses and hotels where we have to cater for locals and foreigners. With this current clinic, there was too much pressure and our residents were frustrated,” noted Mr Adelaide.

He also talked about the two houses just at the back of the current clinic in line with this project.

“What I heard from Mr Shamlaye, these two houses will be demolished and the people will be relocated. The negotiations are ongoing.”

To enlighten the residents, Nicholas Shamlaye, director general for community health and Kathleen Cecile, deputy chief executive of Health Care Agency explained that “the Baie Lazare health centre will be built on the same plot of land (T1275) contrary to previous plans; services will not be relocated to the Baie Lazare primary school hall.

The principal secretary for habitat, Denis Barbe, has confirmed that they will take care about relocation of tenants in the two houses that are to be demolished.

“For the appointment of design and project management consultant, a tender was advertised in May 2018. We encountered some delays to finalise the request for proposal (RFP), due to the complexity of the new document. RFP issued to seven shortlisted consultants on July 22 and pre-proposal meeting with five consultants took place on July 26. A site visit took place on July 30, with four consultants and the tender opening date was set at September 10, and the Ministry of Health is now taking evaluation of bids,” he explained.

Mr Shamlaye and Ms Cecile also said that in the design, a list of requirements of services has been drawn up in consultation with end-users.

After the approval of design subsequently, a public consultative meeting will be arranged to present the plans. Afterwards, plans will be submitted for planning approval.

A new tender for the appointment of a contractor for building works will then be published. Depending upon the planning approval, it is expected that the contractor can be appointed during first quarter of 2020 and work on site is expected to start mid-2020.