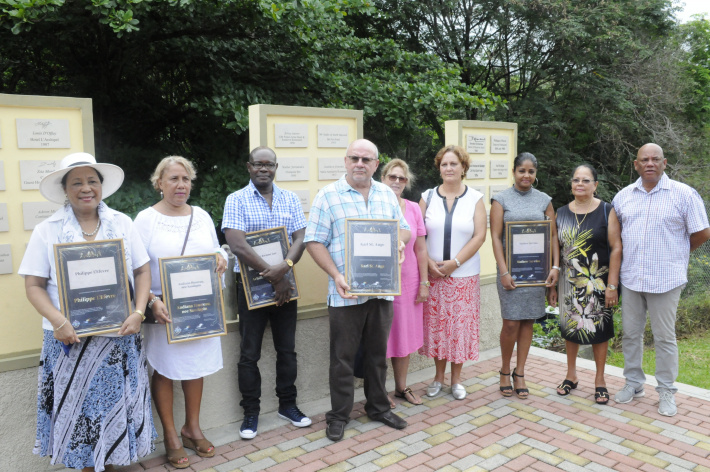 Representatives of the tourism pioneers in a souvenir photograph

A fourth group of seven tourism pioneers have been honoured for their “remarkable and significant” contribution in the building of Seychelles’ tourism industry.

The commemorative plaque with the engraved names of the deceased tourism pioneers was unveiled by the principal secretary for tourism Anne Lafortune and the STA principal Flavien Joubert.

Present at yesterday’s ceremony were the Minister for Finance, Trade, Investment and Economic Planning Maurice Loustau-Lanne, the chief executive of the Seychelles Tourism Board (STB), Sherin Francis, family members of the tourism pioneers and staff and students of STA.

Addressing those present, Minister Loustau-Lalanne, who was standing in for the Minister for Tourism, Civil Aviation, Ports & Marine Didier Dogley, said that the fact that our tourism industry has blossomed, it is thanks to the effort of dedicated individuals who have been instrumental in growing the tourism cake to make it the pillar of our economy.

He noted that in most cases the pioneers set out unto uncharted waters with few points of reference beyond their own desire and determination to see Seychelles tourism industry flourish and we have to thank them.

Minister Loustau-Lalanne later presented the tourism pioneers’ honoured certificates to members of their families. All family members who spoke to Seychelles NATION said they were very happy and proud that their departed ones are being recognised for their contribution made towards the tourism industry in Seychelles.

Jose St Ange, son of Karl St Ange, said that his father apart from running the hotel was also an agent for cruise liner Linblad Explorer where in that time he designed the first cow chariot to transport tourists on La Digue.

He noted though that it was a pity that Cabanes des Anges was taken over by government in the early days and is now part of La Digue Island Lodge but the family legacy name in tourism still reigns with his nephew, Carl Mills, rebuilding a new hotel close by with the name Cabanes Des Anges.

“We appreciate very much what has been done as we were not expecting that he was going to be recognised for his contribution in tourism and we are very happy,” Jacqueline Servina, the daughter of Matthew Servina, said.

Marie L’Efevre, the wife of Mr L’Efevre, said that she knows that her husband from where ever he is is as proud like her for the recognition.

“The opening of Seacrest Restaurant on July 30, 1965 was among one of his achievements and was proud of it. He also did boat charters with fishing trips and all the fishes they caught ended up being cooked at the restaurant. Those were the good old days,” she said.

The son of Andiana Hoareau Sandapin, Terry Sandapin, said his mother was a very determined business-minded lady who made her way to compete with the then male dominance in doing tourism business in the 1970s.

He noted that apart from owning several tourism businesses like the Café Royal, La Marmite, Manresa Guest House and also part of Rendez Vous, she also owned a car hire with only one car and was a member on the first nine-member consultative tourism board at that time.

Mrs Hoareau-Sandapin, who passed away last year, was influential upon her return to the country from exile in the construction and running of the family tourism establishment in Beau Vallon, the Augerine Small Hotel.

The principal of STA Flavien Joubert said the idea of placing the Seychelles Tourism Pioneers Park at STA is for the students to know and be motivated and inspired to walk in the footsteps of the pioneers and also for them to understand that these people have worked very hard for us to be able to enjoy what we are enjoying today.

He noted it is very important that they are recognised along with their families.

The Grimshaw and the Loizeau families were not present at the ceremony while the person representing Archille Luc did not feel at ease to talk to the press.

The recognition of the tourism pioneers was part of celebrations marking the Tourism Festival. 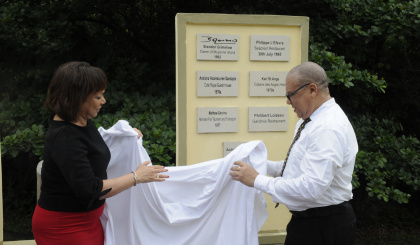 Unveiling of the plaque honouring the seven tourism pioneers