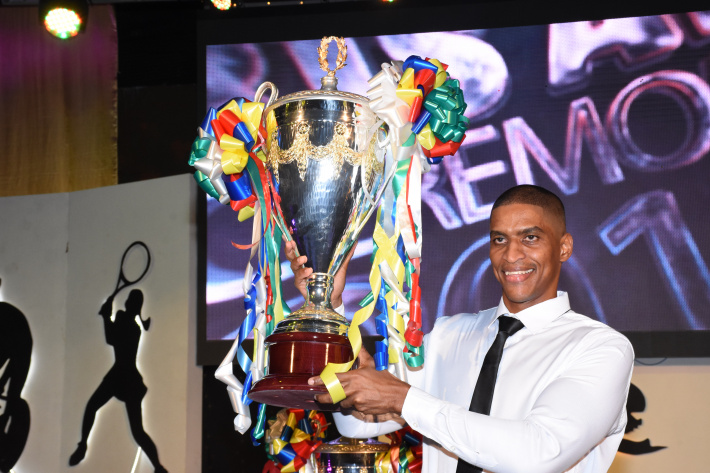 Crowned for the year 2019, sailor Rodney Govinden and swimmer Felicity Passon are still holding the sportsman of the year and sportswoman of the year titles (Photos: Joena Meme)

For a third consecutive year, the Sports Awards of the Year crowning ceremony has not featured on the National Sports Council’s calendar of events.

Why has the break been extended to a third year when competitive sports resumed last year (2022)?

National Sports Council’s director for competitive sports, Alain Alcindor, has the answer: “Not all sporting federations and associations were able to run competitions in 2022 for different reasons. Some did not have adequate venues, while others could not draft and run a proper calendar of activities after the return to normalcy following the restrictions imposed as a result of the Covid-19 pandemic.”

It was in October 2020 after much deliberation and consultations with stakeholders that the then National Sports Council (NSC) board took the decision to cancel the annual Sports Awards of the Year ceremony.

During the consultative meeting in 2020, the NSC board deliberated on the pros and cons of organising the ceremony, and eventually concluded that it would not be appropriate given the financial, health and economic situation of the country. Most federation chairpersons agreed that it would not be in the best interest of sports and holding the event would not do justice to athletes, coaches, officials and federations who had not been active during the Covid-19 pandemic.

A press communiqué from the NSC in October 2020 read: “Since the department of health has been discouraging the organisation of big events, which attract a lot of people, therefore going ahead with the Sports Awards crowning ceremony would be irresponsible and in contradiction with the health measures in place. Other concerns raised by the chairpersons were that most federations and associations have not organised competitions, and that will make it hard to select the best of the best of athletes.

“The decision is also in line with the department of health and World Health Organisation (WHO) guidelines in relation to the Covid-19 pandemic that no contact sports be organised.”

Since the Covid-19 pandemic persisted in 2021, again most federations and associations did not organise competitions until late in the year.

Last year (2022), only a few sports federations and associations drew up and ran their calendar of activities. Others did not for many reasons as explained by Mr Alcindor.

Organised mostly through funds from sponsors, the Sports Awards of the Year ceremony was launched in 1983 with the objective of honouring the most outstanding sportspersons to enhance their general status and to give them dignity and a place of honour in society.

Under this scheme, cash prizes, trophies and prizes in kind are given as rewards for the most spectacular and outstanding performances in the field of sports by individual male and female sportspersons.

Over the years, the scheme has extended to highlight the outstanding achievements from local athletes, teams, coaches, volunteers, officials sports federations/associations, educational institutions and disabled athletes.

The first sports dinner dance was organised by the NSC at the School Meals Centre on the night of Saturday March 3, 1984. It was a good occasion for athletes of various disciplines to exchange their views.

Then NSC secretary Antonio Gopal presented the prizes to over 20 sportsmen and women who had been nominated best sportsmen/women for 1983 by the different federations and associations.

Speaking on behalf of then Youth and Defence Minister Ogilvy Berlouis, Mr Gopal said he was slightly disappointed with the turnout.

This being the first such national gathering in the history of sports in Seychelles, Mr Gopal was confident more sportsmen and women and fans would take part in the years to come as they would have got use to the idea.

Chairperson of the organising committee, Giovanna Rousseau, said that the following year people would play a more important role in deciding who would win the awards.

“We have to start following our sportsmen and women as from today so as to give a good verdict at the end of the year,” she was quoted as saying in the Tuesday March 6, 1984 issue of Seychelles NATION newspaper.

Mike Mancienne first Sportsman of the Year in 1984

Mike Mancienne, aged 27, was voted the first Sportsman of the Year on Friday December 28, 1984 at the Pirates Arms during a presentation dance.

His selection came from 22 contenders, each one of them voted as the best in their discipline.

The cup was sponsored by Auberge Club des Seychelles, while Air Seychelles gave out a shield.

First Sportswoman of the Year Barbara Habayeb in 1985

On Friday January 31, 1986 at the Reef Hotel, Barbara Habayeb became the first athlete to be presented with the Sportswoman of the Year title by then principal secretary for youth and defence Ralph Adam, who deputised for Sports Minister Ogilvy Berlouis.

Aged 27, Habayeb, who had won the best windsurfer title in 1983 and 1984, was the silver medallist at the Second Indian Ocean Islands Games in Mauritius in 1985. That same year, she completed the 44-kilometre Mahé-Praslin windsurfing race, beating four men.

The Sportswoman of the Year award was given as an incentive to encourage more women to take part in sports.

The Sportsman of the Year title went to boxer Ralph Labrosse, who relegated volleyballer Jourdan Lepathy and footballer Ange Dubignon into second and third places.

Crowned in January 2020 after dominating the 2019 season, sailor Rodney Govinden and swimmer Felicity Passon are currently holding the titles.

Tennis player Damien Laporte and weightlifter Joelita Koloma are the reigning young male and female athletes of the year.

It is hoped that with the 11th Indian Ocean Islands Games on the horizon, all local sports federations and associations will be organising competitions as they prepare their athletes to compete in Madagascar. 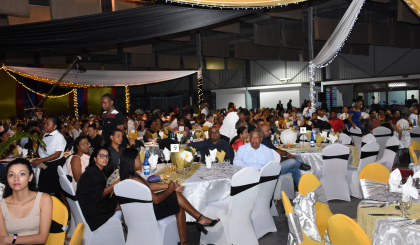 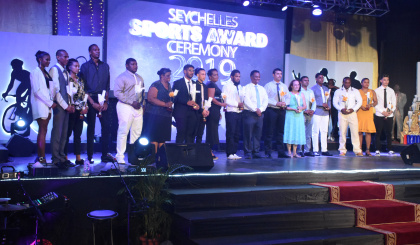 The Sports Awards of the Year crowning ceremony has not taken place over the last three years (Photos: Joena Meme) 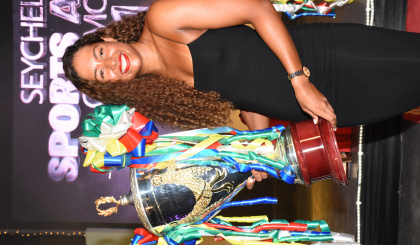