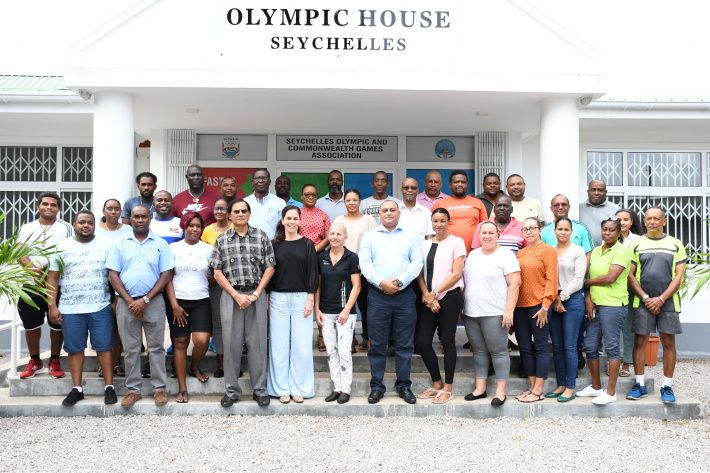 The coaches in a souvenir photo with Mr Gopal, PS Jean-Louis, Mr Alcindor and the Paisac instructors (Photo: Emma Ah-Kong)

In preparation for the forthcoming Indian Ocean Islands Games slated for Madagascar in August, the Seychelles Olympic and Commonwealth Games Association has officially launched the Olympic Solidarity training ‒ a seminar for coaches where they are learning new skills and approaches for their athletes.

The training was launched yesterday morning at the Olympic House, Roche Caïman, in the presence of the Seychelles Olympic and Commonwealth Games Association (Socga) president Antonio Gopal, principal secretary for youth and sports Ralph Jean Louis, Socga secretary general Alain Alcindor, as well as Rebecca Sueur, the director from Paisac, which is the international support programme for African and Caribbean sports.

The programme, sponsored by the Olympic Solidarity, is a combination of training in physical ability, technical skill and partaking psychological knowledge to address optimal performance and wellbeing of athletes.

Part of the main mission of PAISAC is to share the maximum possible high level knowledge in applied sport sciences with the wish that this knowledge is then shared with the largest possible number of coaches mainly from African and Caribbean countries.

In her speech, Ms Sueur thanked the “beautiful team of the national Olympic committee of Seychelles” for their implication in the project and the trust that they have put in them.

“Your vision and constant desire to train your coaches is exceptional and demonstrate your country’s strong will to continuously improve and offer the best possible tools to your coaches for the development of their careers and their athletes,” she said.

Seychellois coaches will have the great opportunity to benefit from the knowledge of Swiss, Canadian and Jamaican coaches in the next 10 days. The coaches are Monika Kurath, the former champion and judo coach of the Swiss Judo Federation; Okeile Stewart, a Jamaican high level sprint coach; and Alexandre Parent from Canada, specialist in physical preparation.

When addressing the participants, Socga president Gopal thanked Paisac and the Olympic Solidarity for their help and the opportunities given to Seychellois coaches, adding he hoped the coaches appreciated it and take advantage of it.

“We want you to assimilate as much knowledge of these different components and then to ensure to apply it in your work,” he concluded.

In an interview with the media, Socga secretary general Alain Alcindor said the training comes at an opportune time as the local coaches have started preparing their athletes for the Indian Ocean Islands Games and would therefore be beneficial to them.

He said one of the weak points among local athletes is their mental state and the course will help them tackle the issue.

Nathalie Agnes, who is the coach of the volleyball cadet team, has welcomed such a training stating it would help her identify young talents, who would make Seychelles proud in the long run.