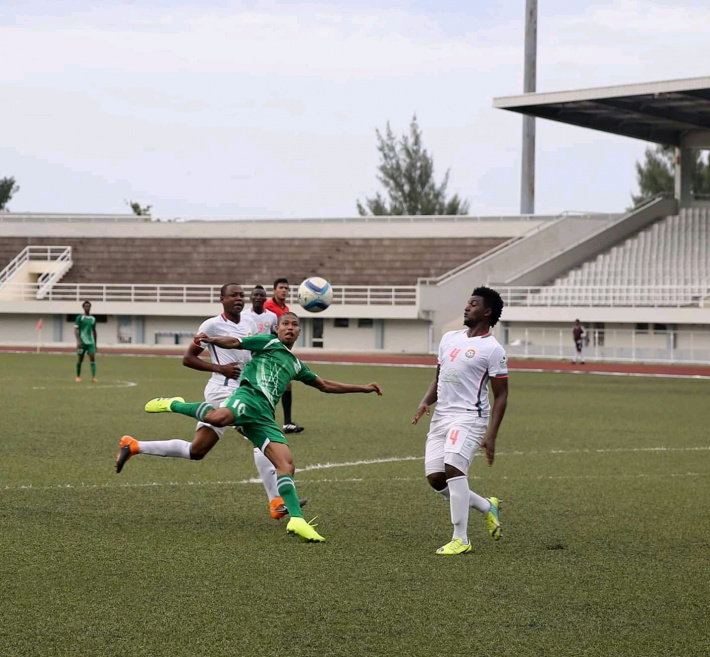 Corallie (in green) scored a hat-trick against Au Cap

Leroy Corallie bagged a hat-trick on his full debut to inspire 10-man Foresters to a yawning 7-1 triumph over Au Cap on Wednesday afternoon at Stad Linite in a SeyPearl Premier League match.

Foresters opened the floodgates as early as the 3rd minute when Nigerian Kazeem Adeyeri controlled a long ball and then pulled the ball back to Corallie who rifled it past goalkeeper Terence Mondon for a 1-0 lead.

Au Cap responded in the 7th minute from a darting run by Ghanaian midfielder Jonas Baffoe who weaved his way into the Foresters penalty area before being crowded out.

In the 18th minute, Foresters suffered a major blow from Baffoe’s inswinging corner which goalkeeper Raphael Moustache just kept out but Carlos Andre headed the ball goal wards during which time defender Vanerick Michel punched the ball out from the goal-line.

Referee Nelson Emile pointed to the spot for a penalty and awarded a yellow card to the defender but after being summoned by the fourth official Emile Fred, he reversed his decision to issue a straight red card to Michel and the penalty stood allowing Baffoe to convert for a 1-1 score.

Foresters were rattled with 10 men and Au Cap should have taken the lead in the 24th minute from another Baffoe corner which was headed out to Au Cap’s Jemmy Anacoura whose miscued shot dropped invitingly to teammate Thierry Camille who had an open goal to shoot at but he amazingly failed to hit the target.

Au Cap again had a decent chance in the 27th minute from Jean-Yves Joseph’s teasing cross which was met by Carlos Andre’s powerful header but goalkeeper Moustache did brilliantly to block the ball.

After being under pressure, Foresters broke forward in the 35th minute as Brandon Labrosse released Adeyeri who held off a strong challenge by captain Dean Balette to centre to Francis Nourrice at the near post who planted the ball into the net to make it 2-1 and the Au Cap goalkeeper Mondon was injured in the process and was replaced by Christopher Legaie in goal.

Foresters scored a third goal in added time in the first half when Au Cap could not clear a corner which fell to Labrosse on the edge of the penalty area and he let fly a stinging shot which goalkeeper Legaie fumbled to make it 3-1 at half-time.

Foresters showed their class in the second period as they completely dominated their opponents and in the 53rd minute, Labrosse combined with Corallie who played the ball to Adeyeri whose fierce shot just flew wide.

Foresters had an even better opportunity in the 64th minute from a glorious cross-field pass by Labrosse to substitute Martin Williams who was in acres of space but he somehow blazed wide.

In the 72nd minute, Adeyeri showed good skill to shake off his marker and link up with Malagasy Jean Tigana who lofted the ball to Corallie who guided the ball into the net with a flicked header to make it 4-1.

Corallie, who had failed to net his hat-trick in the 73rd minute after dispossessing captain Balette and racing through on goal only to shoot wide, made amends in the 78th minute from Adeyeri’s searching ball which he controlled to shoot at goal but was blocked. Corallie pounced on the rebound to stab it into the net for his first hat-trick for his new club and a 5-1 score.

In the 85th minute, Williams found goalkeeper Legaie way off his line and he intelligently lobbed him to make it 6-1.

Foresters completed this rout in the 85th minute when Tigana sprung Au Cap’s offside trap to collect Laurence Leon’s floated pass but his initial shot was blocked and he got a second bite of the cherry to thump the ball low into the net for a 7-1 victory to show that Foresters are strong title contenders with the biggest win so far this season and their coach Harold Hoareau was pleased with his team’s performance.

“We made a bright start in this match but then we suffered a setback but the players kept their calm and played with discipline and showed their class to win three points and score plenty of goals which was what we had expected of them and it was a very good performance,” Foresters coach Hoareau said.

As for Au Cap manager Kenneth Antat, he felt his team should have taken their chances in the first half but thought his players showed too much respect for their opponents and were soundly beaten which was a very disappointing result for them.