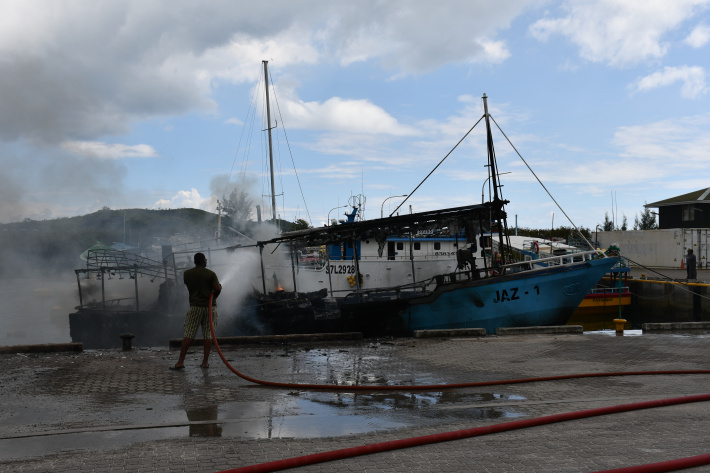 The Providence fishing port is managed by the Seychelles Fishing Authority (SFA).

In a press briefing later in the afternoon, the deputy chief executive of SFA, Ashik Hassan, however said that the Providence fishing port will resume most of its services today.

Also present at the press briefing, held at the SFA headquarters at the Espace building, were the Designated Minister and Minister for Fisheries and the Blue Economy, Jean-François Ferrari; the deputy chief executive of the Seychelles Fire and Rescue Services Agency (SFRSA), Jones Madeleine; the head of department, port management and facilities at SFA, Aubrey Lesperance; and the assistant division officer and PR officer at SFRSA, Terence Arnephy.

Mr Hassan said it was unfortunate that the seven boats have been completely destroyed but he commended the quick response from SFRSA and other key stakeholders to coordinate the operation to put out the fire which could have caused great danger had it spread into the ice plant which uses ammonia, in the fuel depot and to other fishing boats nearby.

He noted that they still have to assess the extent of the damage, over and above that of the seven boats, further details of which will be made available later.

He stated that he was alerted of the fire at 10am. It is estimated that on average one of those artisanal fishing boats cost between R700,000 and R1 million.

It was also confirmed that one boat owner lost two boats in the fire.

Mr Hassan said there are plans to extend the port to prevent congestion.

The SFRSA’s deputy chief executive, Jones Madeliene, said they were alerted of the fire at the port at 10.11am and two fire engines were quickly deployed.

He added that it took them six minutes to arrive at the scene and as the situation was very serious, given that the boats were already in flames, more manpower with extra equipment were called in to contain the fire which had apparently started in one of the fishing boats and spreaded quickly to the other boats nearby which were all tied up together.

Mr Madeleine said that due to the dry weather and water restrictions still in place, they had to pump seawater instead to put out the fire which took them 45 minutes.

He said that the operation was quite difficult given that some boats on fire were drifting away after the ropes they were tied up with burned.

In addition, they also had to minimise the amount of water sprayed on them to prevent them from sinking, which might have paralysed the port’s operations and also the manoeuvre to remove other boats away from the burning ones.

He said an investigation is ongoing to determine the cause of the fire. He noted that no one was injured in the fire.

The port accommodates an average of sixty artisanal fishing boats at any one time and at the time of the fire there were 40 of them in the port.

Minister Ferrari, who expressed his sadness on the fire incident and solidarity to the boat owners and the fishermen, said that his ministry, in collaboration with SFA, will assist the boat owners with their insurance claims, among other technical help and assistance to boat owners as well as fishermen who are not insured.

He noted that the loss of the seven fishing boats will not have an impact on fish supply on the market as we are experiencing the North West monsoon where fish is in abundance.

He added that they will be meeting with the boat owners on the way forward following the incident.

Mr Lesperance said that while the port will resume most of its activities today after some clean up, they have also been working closely with the Seychelles Bureau of Standards (SBS) since yesterday to set up a temporary shelter to cater for a loading and unloading export shelter at the port due to the two landing sheds which have also been damaged by the fire among some other sections of the port infrastructure and some CCTV cameras which have also been destroyed.

He noted that as a result of the heat and heavy smoke from the fire, they tested the ice to be sold to fishermen and found that they are in perfect condition.

With regard to the aquaculture facility at Providence, Mr Lesperance said that fish in the tanks are also in perfect condition as necessary measures were taken to protect them, especially from lessons learned from the recent landfill fires.

The accompanying photos show some highlights of the fire incident yesterday at the Providence fishing port. 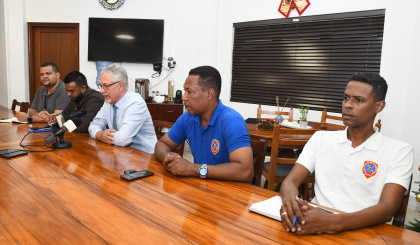 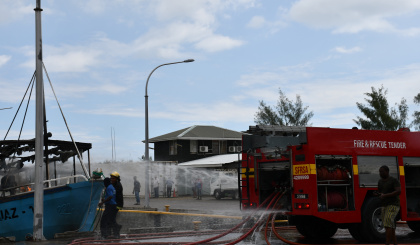 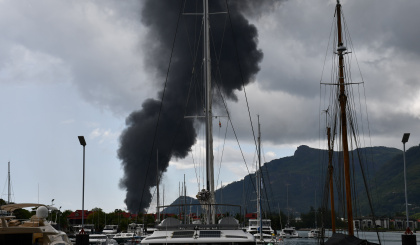