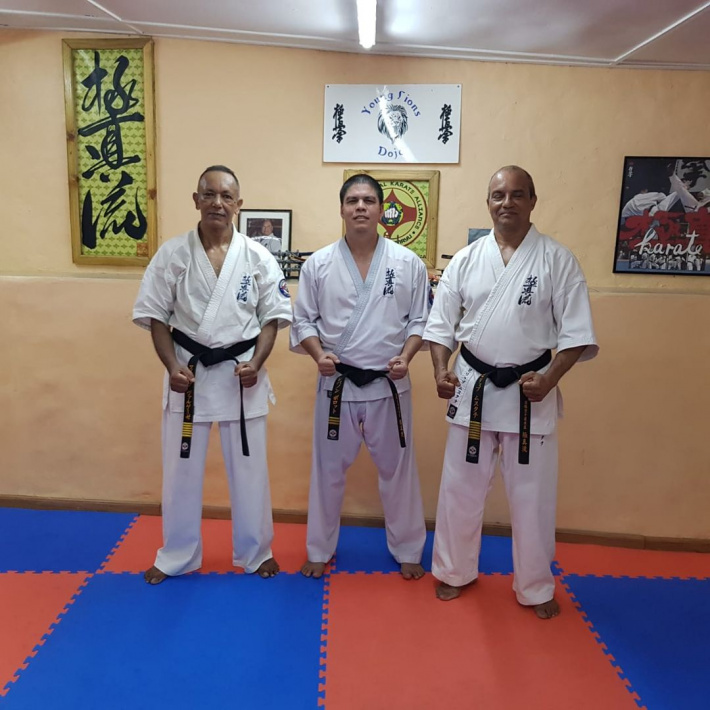 At the end of his last black belt class training session at the Young Lions Dojo, Sensei Liban Borroto Segura was promoted to the grade of 4th dan black belt in Kyokushin Ryu by Shihan Phillip Moustache 7th dan, the continental director for Africa.

Sensei Liban, who is a medical specialist from Cuba, first came to Seychelles to work 12 years ago and at that time held a 2nd dan black belt in Joshinmon karate. He was convinced by a fellow medical practitioner and Karateka, Dr Erna Athanasius, to join the Kyokushin karate school. Despite the difference with his former style, Sensei Liban trained diligently in all the classes and eventually adapted to the robust Kyokushin training regime. He also proved to be a good instructor, taking the classes in the absence of his superiors and motivating the younger members to train harder.

Sensei Liban also participated in the national tournament organised by the Seychelles Karate Federation where he placed highly in the kata competition. During his period of stay here, he participated in all the annual training camps organised by the Kyokushin school on Praslin. In 2018, he took part in an international grading exam conducted by Japanese instructors in Cape Town, South Africa.

Sensei Liban has been appointed as the country director for Kyokushin Ryu in Cuba where he will be helping to promote the karate style in his dojo and also by means of national seminars.

Sensei Liban will be leaving Seychelles this coming weekend and all Kyokushin karatekas thank him and wish him the best of luck in his future endeavors.