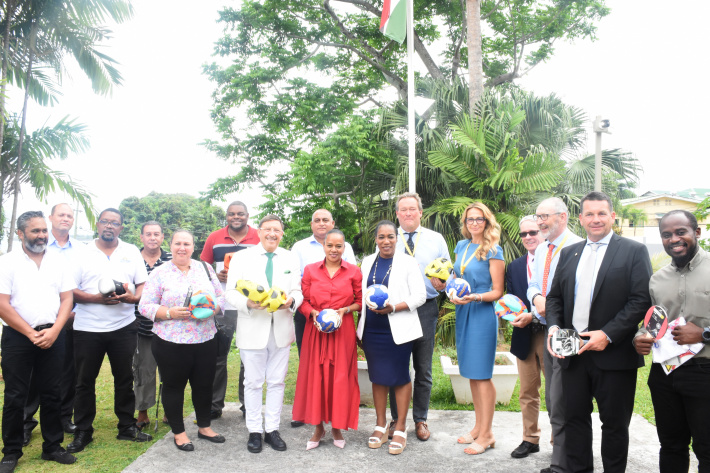 Souvenir photo of Mr Zialor, the honorary consuls and representatives of the sports federations and associations

Seven local sports federations and associations have received batches of equipment which will boost their preparations for next year’s Indian Ocean Islands Games, scheduled to take place in Madagascar.

The sports equipment is a gift from seven European honorary consuls who are presently in the country to attend the Seychelles Honorary Consuls’ conference.

The equipment was handed over to representatives of the different federations and associations during a special ceremony yesterday at the Family House at Bel Eau, in the presence of Minister for Youth, Sports and Family Marie-Celine Zialor, and principal secretary for youth and sports Ralph Jean-Louis.

Honorary consuls for Bulgaria Maxim Behar and Luxembourg Joseph Butz Welter presented football equipment to the president of the SFF Elvis Chetty, while their counterparts for Croatia Sonja Udovicic and Slovenia Marko Smole presented equipment to representative of the National Sports Council (NSC) Ruudy Joseph who represented the SHF and the STTA.

As for Corneliu-LiviuPopescu, the honorary consul for Romania, he handed over basketball and volleyball equipment to Dominic Pillay and Elsia Vidot of the SBF and SVF respectively.

On behalf of the government, Minister Zialor thanked the consuls for their gesture which she described as noble and important, not only in preparing our athletes for the next IOIG, but also in shaping the country’s future athletes.