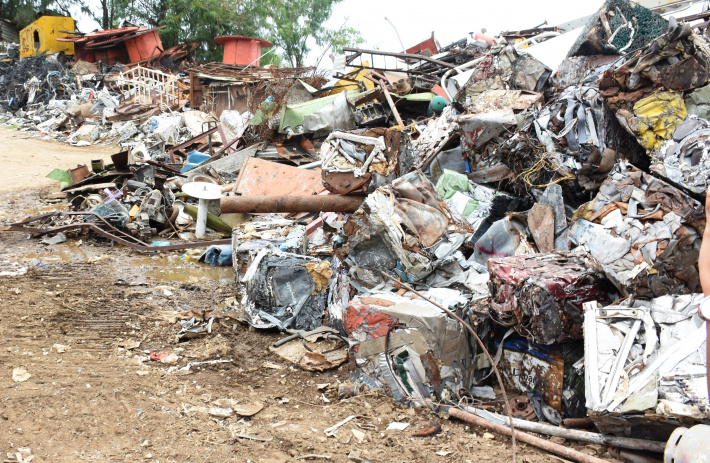 While it has been advised to speed up the removal of scrap metal and make space for other scrap that will come in during the forthcoming national Clean-up the World campaign, Samlo & Sons has said it is not having any difficulty whatsoever to remove these rubbish from its site at Providence.

“We are not having any difficulty whatsoever to remove scrap metal from here. The only problem is that we need to clear the loads of scrap stacked along the two sides of the road leading to our compound but other than that we are doing fine,” the company’s manager Kodi Ramanah has told Seychelles NATION.

Following a visit by Vice President Vincent Meriton to the site recently, it came out that the Mauritian company had been advised to speed up with the removal process not only to make space available for scrap that will be collected during the forthcoming Clean-up the World campaign but for other recycling operators who are expected to also engage in the same business.

Mr Ramanah affirmed that the previous management is partly to blame for the backlog.

“The previous management is partly to blame for the backlog but since a change in management when I took charge of operations in August last year, everything has been running smoothly. I can tell you when I first came there was a mountain of metal and there was no way you could go beyond it. We’ve managed to scale down the mountain of metal and in the coming days there will be enough space for any other activities,” Mr Ramanah said.

The company has only one metal crusher and it is being assisted with a Caterpillar and 12 foreign workers. Mr Ramanah said the machinery and workforce on site is enough for the job. Work is from Monday to Friday from 8.30am to 4.30pm and on Saturdays work ends at 1.30pm.

Mr Ramanah further said that from his observation less metal scrap is coming to the centre. He noted though that from the consignments of scrap metal that do come in, only 50 percent is metal while the rest is made up of other waste such as plastic, old mattresses, wood, soil as well, among other rubbish.

According to Mr Ramanah, Samlo & Sons has been dealing in scrap metal in Seychelles for the past 20 years and on average the company exports eight to 10 containers of scrap metal to Mauritius every month.

“The monthly export is roughly equivalent to 200 tons of metal but we don’t get 200 tons of metal coming to the centre on a monthly basis. This is why we have been able to clear part of the site and the rest to be cleared fairly soon,” Mr Ramanah said.

He noted that it takes 10 minutes from the start of the process to make a metal bundle and by having more people doing the job the end result will be the same as the whole process will take the same amount of time. Asked if a second crusher would be of more help, Mr Ramanah said that for the time being with the amount of scrap metal at the site, one crusher is enough.

Meanwhile, the Landscape and Waste Management Agency (LWMA) announced recently that a second metal crusher will be in the country in October to help with recycling other metals with plastic components, a recycling process not being done by Samlo and Sons.