Business back to normal at Providence Industrial Estate |30 September 2022 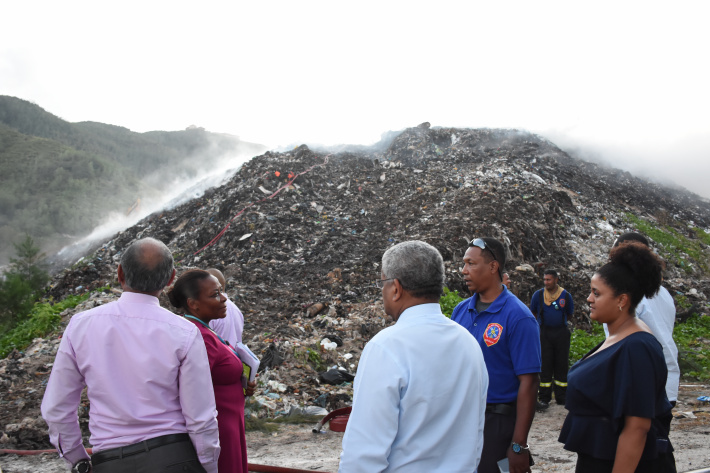 President Ramkalawan and his delegation visiting the site yesterday

Businesses and educational institutions in the vicinity of the Providence Industrial Estate will be fully open to the public and students today now that the fire that broke out on Tuesday afternoon at the Providence landfill 2 has been put under control.

The announcement was made by Jones Madeleine, senior division officer of the Seychelles Fire and Rescue Services Agency (SFRSA), during an update on the situation yesterday evening at the base of the landfill.

He added that 80% of firefighting work had been done and that some twenty SFRSA firefighters, among the 30 strong firefighters present, were to remain behind throughout the night until today to extinguish sporadic blaze that were popping out and until the landfill is completely covered with coral fill and other materials assisted by the Land Waste Management Agency (LWMA).

Mr Madeleine stated that since the last update on Wednesday evening, work to control the fire by covering it with coral fill was carried out until 11 that night. He said that they also had the assistance yesterday of two out of four heavy duty portable water pumps which arrived in the country on Wednesday night, gifted by the United Arab Emirates at the request of President Wavel Ramkalawan.

He noted that the two Fox portable water pumps were of great help in fighting off the fire where no SFRSA firefighting machines had to be used in the operation yesterday.

He added that SFRSA is expected to get further new equipment from the UAE in the form of gas masks to facilitate work on top of the landfill and which were expected to be flown in last night.

He thanked all those who have assisted in fighting off the fire, including businesses for their logistic help and members of the public for their understanding.

For his part the deputy chief executive of LWMA, Rahul Mangroo, said that although the Providence Industrial Estate will be fully operational today, the landfill will remain closed. However, people with an urgent need to use the landfill must telephone first before coming.

As of yesterday evening 40% of the landfill affected by fire were covered with coral fill compared to 25% on Wednesday evening.

He said they also got help from the Civil Construction Company Limited (CCCL) who provided quarry waste to contain the spread of the fire from sideways along the landfill.

Mr Mangroo said that compared to Wednesday they had six big excavators and front loaders and 10 to 20-tonne trucks to help in dumping and carrying off the coral fill and quarry waste.

He noted that apart from stopping the blaze, the dumping of the landfill was also to prevent the spread of smoke towards the North and away from the flight path. Work to cover up the landfill stopped at 7 last night and will continue today.

Also present at the landfill yesterday evening were President Wavel Ramkalawan; Vice-President Ahmed Afif; the Minister for Internal Affairs, Errol Fonseka; the Minister for Investment, Entrepreneurship and Industry, Devika Vidot; and officials from disaster response and rescue agencies including the police. 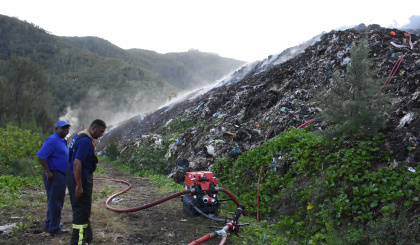 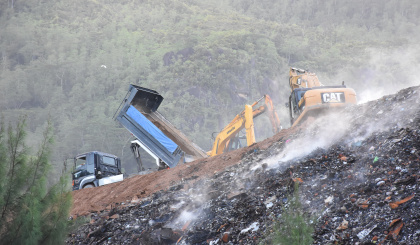 Ongoing work to combat the fire