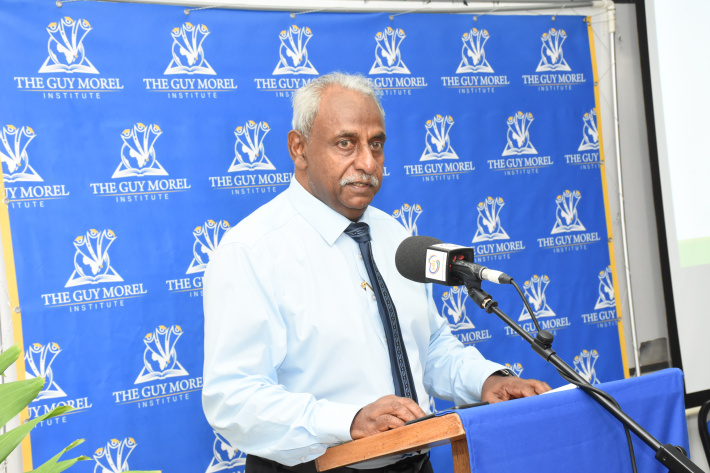 Minister Fonseka addressing the gathering during the launch of the training yesterday (Photo: Patrick Joubert)

Given the shift in the nature of crime from the traditional to cyber, among other forms of crimes extending beyond our borders and the high expectation from the public, leaders in the Seychelles Police Force are following a transformation management training to bring the force to the next level in service delivery to the public and to combat such crimes.

Among the leaders following the five-day training are Police Commissioner Ted Barbe and deputy commissioners Francis Songoire and Ron Bonnelame.

The ‘Transformation Management’ training being held at The Guy Morel Institute (TGMI), Ma Joie, has been developed by the institute to provide powerful understanding of change and project management to facilitate the implementation of the strategic review of the Seychelles Police Force.

The training was initiated by the police in collaboration with the British high commission.

It is expected that the sensitisation in these two areas (powerful understanding of change and project management) will lay a strong foundation for change initiatives being sought by the force, given that both areas contribute to successful implementation of management strategies and goals.

While opening the session yesterday morning, the Minister for Internal Affairs, Errol Fonseka, said that although some people fear change, it is happening in the world at very high speed and if we do not change with it, we could end up going backward.

Minister Fonseka said that the police need constantly to be changing in all areas to cope with the speed crimes are evolving, which are very complex and which leaders will have to continue to learn to know about.

He noted that the changes within the force need to make sense to all and he called on the leaders to make the most of the training to facilitate the change the country and people are wishing for.

Delivering a few words for the occasion, TGMI client support manager, Christina Esther, said that they were honoured to be part of the transformation effort within the Seychelles Police Force, through the development and delivery training.

She noted that as a stakeholder, they are aware of the considerable challenges presented to the Seychelles Police, in particular, the shift in the nature of crime which can have a significant impact on the volume and complexity of the police workload in ensuring that the country is safe and secure.

She said that the review and updating of operating processes and procedures with a view to increasing efficiency and timely execution will greatly stimulate a positive working culture within the force.

While the first four days will be concentrating on understanding of change management principles and introduction to project management, the last day of the training will serve as a forum for reflection and development of an action plan and realistic timelines for implementation.

Also present at the launch of the ’Transformation Management’ training  yesterday were the head of productivity unit at the department of employment, Marie Vonne Francis and Philip Knox and Sir George Hamilton, two among the three UK consultants who worked alongside the police on the Police Strategic Review. 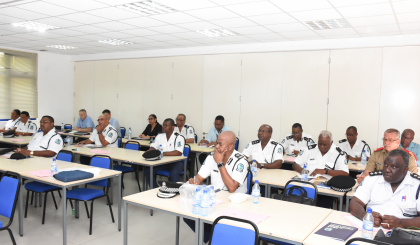 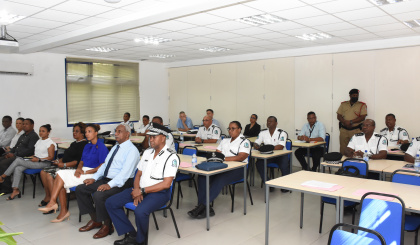