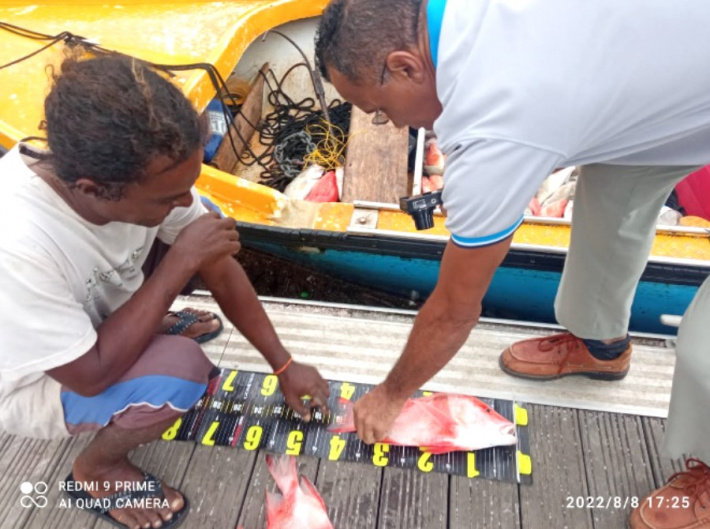 The measures in the co-management plan include the size and length of fish artisanal fishers would be allowed to catch such as snapper which has to be 32 centimetres in length (Photo credits: SFA)

Effective October 1, 2022 any person who contravenes the Fisheries (Mahé Plateau Trap and Line Fishery) Regulations, 2021, under the Fisheries ACT (Act 20 of 2014) will be committing an offence and if found guilty, will be fined up to R20,000.

The plan, which prescribes measures for the proper management of the fisheries sector, regulates commercial, recreational and sports fishing activities. It came into force in January this year. However the penalty component kicks in on October 1.

Stakeholders had been given a nine-month period to get acquainted with the regulations and measures.

At its meeting yesterday, chaired by the principal secretary for Fisheries, Roy Clarisse, the Implementation Committee of the Mahé Plateau trap and Line Fishery Co-Management Plan, (MPTLFCP), said fishers should now be ready to face the full brunt of the law.

Speaking to local media, Darell Green, the vice-chairperson of the committee, who is also the chairperson of the Praslin Fishers Association, said fishers have been given enough time to prepare themselves and should now be ready to work for their future.

“The measures should not be seen as punishment but rather one that will guarantee that our children can enjoy fish such as snapper, grouper and jobfish in the future, as well as for us fishermen who depends on these resources for our livelihood. Because if we catch all the small ones, then there will be none for the future,” he said.

The measures in the co-management plan include the size and length of fish artisanal fishers would be allowed to catch such as snapper which has to be 32 centimetres in length. Fishers are being provided with rulers to ensure they respect the measurement.

There is a limit as to number of traps allowed per commercial fishing boat which is six and bag limit on the catch for commercial, recreational, competition sport or sport fisher.

Consumers are not allowed to buy fish caught in any recreational fishing, competition sport fishing or sport fishing activity unless exempted in writing by the Seychelles Fishing Authority and they are allowed to purchase fish from licensed commercial fishers.

The fish being targeted include hand line fishery such as snappers, groupers and emperors and trap fishery including rabbitfish, parrotfish and emperors.

Mrs Onginjo said the Praslin Fishing Boat Owners Association held a meeting for its members last week, in preparation for the implementation and one of their main concerns was enforcement for recreational and sports fishers.

She said other than that they were ready for its implementation.

“The law will be enforced on October 1 whether they like it or not. They have been given the grace period to get used to it and now if they are caught with undersized fish they will be fined and they need to understand this. The association will not be able to fight this because we formed part of the committee that came up with this plan,” said Mrs Onginjo.

The plan also targets sports fishing and for Mervin Dugasse, who represents Seychelles Sports Fishing on the committee, the plan is an ideal one for Seychelles if it wants to protect its resources and ensure a sustainable fishing industry.

Mr Dugasse, who has been in the business for over twenty years, and practices catch and release, said it was about time Seychelles came up with strict measures although some would feel aggrieved by the measures.

“We have to protect our resources although we will not be pleasing everybody but we need to see this through. It took us a long time to work on this and now we have to ensure that it is implemented fully,” said Mr Dugasse.

He however questioned the enforcement part of the regulations especially for sports fishers who may not be practicing sustainable fishing and whether the R20,000 will be a deterrent.

“We created precedence when we allowed bigger vessels moored at Eden island not to practice catch and release and I think it will be very difficult for SFA now to police this bit. It will be tough, especially when you take into account a yacht flying an international flag fishing in our waters. Will the enforcement officers be allowed to board the vessel?” asked Mr Dugasse.

Another point raised with regard to enforcement was SFA’s human resource and whether it had enough officers to police the fishers.

Mr Green said he felt it was one of SFA’s weaknesses and the organisation needs to find a way around it.

“There is a staff shortage which means they will not be able to implement the plan at a hundred percent. I raised the matter at the meeting because I wanted to make them realise that if we are serious about this issue of conservation then government through its partners will need to invest in SFA and ensure it has the necessary resources,” he said.

Meanwhile the SFA said it was already enforcing the Fisheries (Mahé Plateau Trap and Line Fishery) Regulations, 2021 and this included soft enforcement where they are monitoring landing sites and conducting inspections on both commercial and sports fishing boats.

According to the head of SFA’s monitoring, control and surveillance unit, Johnny Louis these are going well, and they are now ready for full enforcement where they will be checking size limits and bag limits among others.

“As it had been clearly pointed out during the meeting, as soon as we see any infringement we will be issuing fines from October 1,” he said.

Mr Louis said although there were concerns raised over recreational and sports fishing, he wanted to reassure the committee and the public that these two groups are not left out in their inspection and there are spot checks on a weekly basis.

He admitted however, they do focus more on commercial fishers, which poses more risk, but based on the points raised at yesterday’s meeting, his officers will re-adjust its work plan to focus more on recreational and sports fishers.

Mr Louis said although there are concerns over the number of enforcement officers, his unit maximises the use of its resources and is now looking at other options to ensure it fulfills its mandate.

“Human resource is always a constraint as we do not have only this plan to enforce but other requirements we have to oversee.  We do maximise our resources. We are also engaging with other enforcement agencies and we are drafting MoUs with the police. We also have a good working relationship with the Seychelles Coast Guard, so now we’ll focus more on this plan but the engagement is there,” explained Mr Louis.

He is appealing to fishers to respect the measures and is reminding them that under the law the enforcement officers can legally board and inspect any vessel.

According to Mr Louis so far around 20 percent of them have been resisting his officers.

“We are already getting some resistance from fishers who do not want us to board their vessel, or they hide the fish, but I would like to remind fishers that they were involved with the drafting of this co-management plan so we expect to see their contribution in its implementation. I hope they cooperate and work alongside our officers, which after all is doing their job as mandated by law,” added Mr Louis.

Yesterday’s meeting also saw the presentation of the national media awareness campaign to educate the population about the Mahé Plateau trap and Line Fishery Co-Management Plan and the measures in place. 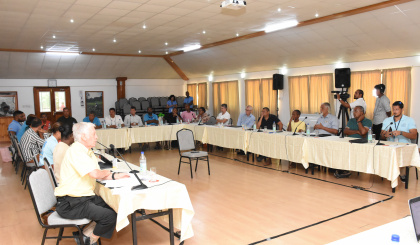 The Implementation Committee of the Mahé Plateau trap and Line Fishery Co-Management Plan during its meeting yesterday (Photo: Joena Meme) 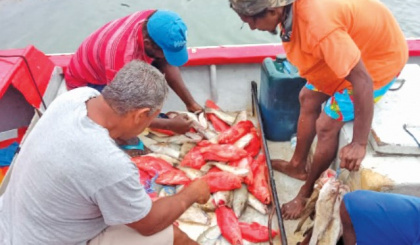