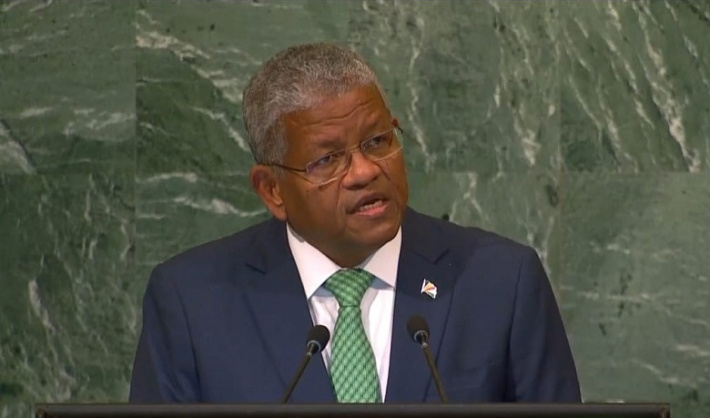 President Ramkalawan is among over 150 world leaders who are in New York and will be delivering statements during the coming two days as part of the Heads of State and Government General Debate.

Addressing the floor, President Ramkalawan congratulated the new President of the 77th Session of the United Nations General Assembly, Csaba Kőrösi, while also extending Seychelles’ profound appreciation to the outgoing President, Abdullah Shahid, for his leadership during the preceding 76th UNGA session.

The President reminded the assembly that multilateralism provided each member state with the opportunity and the means to resolve complex challenges collectively, that otherwise could not be overcome alone, particularly in the face of the various major global challenges.

“Never have we faced challenges of such magnitude. A world in deep crisis; climate inaction, the aftermath of the pandemic, food insecurity, the rising costs of energy, and the war in Ukraine. We have reached an inflection point. One that compels us to question the trajectory of our multilateral order, as the perils to our collective wellbeing are acute and numerous.”

“Faced with a multiplicity of interrelated challenges that many of us are least responsible for, but most affected by, the plight of states in vulnerable situations has never been more pronounced. Many of us in the developing world have had to revise our 2030 aspirations due to lost progress,” stressed the President.

He further made a plea to the assembly in recognising the plight and vulnerabilities of small island developing states (Sids) while continuing to implement temporary solutions.

“If this is to be a watershed moment, we must put into practice real solutions that focus on addressing vulnerabilities and building resilience to ensure socio-economic sustainability. We need the international financial institutions and multilateral development banks to look beyond the Gross National Income benchmark.”

“There is broad consensus that a Multidimensional Vulnerability Index (MVI) offers a specific approach that will complement and improve the efficacy of development cooperation, permitting countries in vulnerable situations to access concessional financing and address their needs,” said President Ramkalawan.

The President, who is a member of the High-Level Committee appointed by the UN secretary general representing small island states of the Atlantic, Africa, and SE Asia, welcomed the interim report of the High-Level Panel on the MVI, and also expressed hope that progress on universally-accepted and inclusive indicators that capture vulnerabilities of all developing states can be accelerated ahead of the 2023 deadline.

The President ended his speech by addressing climate mitigation and adaptation issues and encouraged leaders to be prepared to take bold decisions.

During his participation at the UNGA 77, President Ramkalawan will be participating in multiple side-events and bilateral meetings. The President and the First Lady will this evening also attend a dinner hosted by the President of the United States, Joe Biden.

Other members of the Seychelles delegation include member of the diplomatic corps in Washington, Ambassador Ian Madeleine; high commissioner to the Republic of South Africa, Ambassador Claude Morel; and second secretary Multilateral Affairs Division, Marion Etienne.

The President’s full speech at UNGA 77 can be accessed at https://www.statehouse.gov.sc/speeches/5664/unga-77-speech-by-president-wavel-ramkalawan