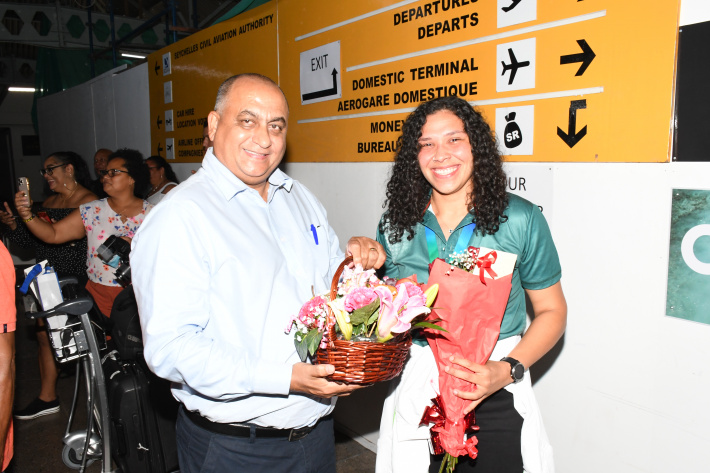 Already in the country’s record books for being the first woman to bring home an international medal in boxing, boxer Arianna Memee returned home yesterday to a hero's welcome, following her bronze medal exploit at the recently-held 2022 AFBC African Men’s and Women’s Championships in Maputo, Mozambique.

Memee, who competed in the 69kg category, started her journey at the championships in the quarterfinal where she won on points against Temnotfo Dlamini of Eswatini.

Unfortunately, she lost her semifinal fight by RSC (referee stopped contest) to Brigitte Mbabi of Congo.

Memee was welcomed on her arrival yesterday by principal secretary for youth and sports Ralph Jean-Louis, secretary general of the Seychelles Boxing Federation (SBF) Edmond Folette, family members and friends.

A bit shy despite being a combat athlete, Memee said she was well prepared mentally for the competition, despite having some back problems during preparations.

She explained that competing and watching competitions are two different things, adding that this is something she learned at her first competition.

A proud Memee said she feels fulfilled since she never stepped into a ring internationally prior to this competition and she remains committed to the sport, while looking forward to upcoming competitions.

As cash prize for the bronze medal, Memee has pocketed US $2,500.

Coach Rival Payet, who accompanied the Seychelles team at the championships, said the performances of the young pugilists were good, taking into account the level of the competition.

He explained that at present Seychelles boxing has a very good team and that soon they will start showing results.

Seychelles was also being represented at the competition by Shain Boniface who lost in the 67kg category on points again Shaft Mwandwe of Zambia, Romano Moustache who lost in the 54kg by RSC in the first round against George Molwantwa George of Botswana, Dasheil Fanchette who won on points in the 80kg against Alton Gabuza of South Africa before losing by RSC in the quarterfinal against Tarek Assaghir of Mauritius, and Joshua Cousin who lost by RSC in the first round against Yousufu Nkobeza of Uganda.

Twenty seven nations competed at the new edition of the AFBC African Men’s and Women’s Boxing Championships where the gold medallists received US $10,000, the silver medallists US $5,000, and the bronze medallists pocketed US $2,500. 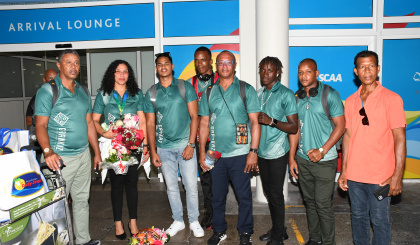 The team who competed in Maputo (Photo: Joena Meme)