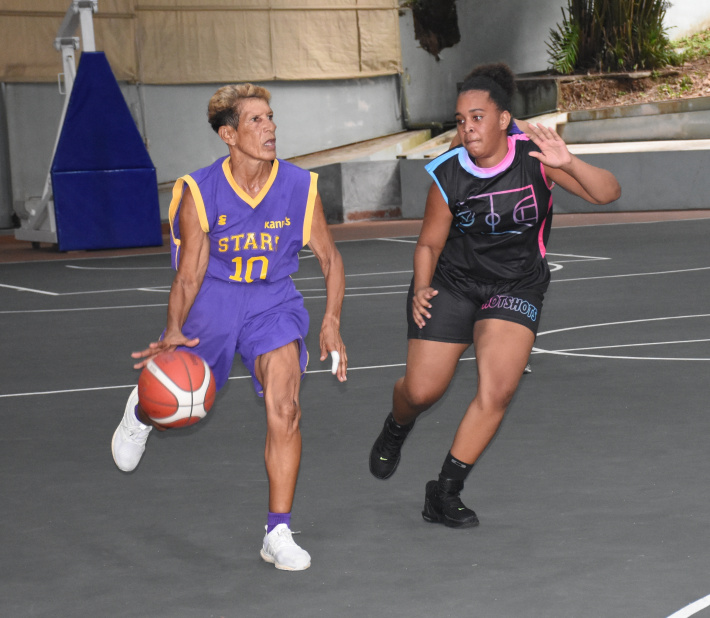 ● Drifters edge out Baya to jump on top

Leaders Anse Etoile Stars are perfectly maintaining their unbeaten streak in the women’s national league, defeating Anse Boileau-based HotShots 52-27 in their last outing on Saturday to bring their win record to five in as many matches.

In the men’s division one league, Drifters are now leading the standings after their narrow 67-66 win over Baya, leapfrogging PLS Hawks whose weekend match against Mont Fleuri Dawgz was cancelled due to lack of match officials.

It took Anse Etoile Stars coached by Kenneth Domingue a while to impose their games on HotShots who were putting up a strong resistance, forcing the first quarter to end on a low 8-6 score in favour of the Stars.

Stars came out stronger in the second quarter of the match, winning it 12-8 to lead 20-14 at half-time.

In the third quarter, Stars scored 13 more points, compared to eight for HotShots to lead 33-22 at the end of the period.

It was in the fourth and final quarter that Stars imposed total dominance over HotShots, scoring 19 points, while the latter chipped in on five to conclude the match on a 52-27 final score in favour of Anse Etoile Stars.

Hillary Nourrice scored 15 points to lead the scoring for Stars, while Shanice Dubel was HotShots’ top scorer with 16 points.

Stars are now on maximum 10 points from five wins in as many matches, while HotShots are last on the four-team ranking on six points from a single win and four defeats in five matches.

HotShots share the same points tally as third-placed Mont Fleuri but are behind on the ranking based on their head-to-head record, after losing against the latter in the first round of the league.

In the other match played in the division, Bel Air-based B Challenge bounced back from defeat in their previous match against HotShots to beat Mont Fleuri 77-60.

After an 18-18 tie at the end of the first quarter, B Challenge had a slight advantage in the second quarter which they won 15-12 to lead 33-30 at half-time.

The third quarter was again tightly contested, with B Challenge boasting a narrow 15-13 advantage at the end to lead 48-43.

It was in the final quarter that B Challenge of coach Michel Malbrook distanced themselves from Mont Fleuri, scoring 29 points compared to 17 for Mont Fleuri to win the match77-60.

Jennifer Bonne was B Challenge’s top scorer with 25 points, while captain Sarah Rose scored 37 point to lead the scoring for Mont Fleuri.

The women’s league will continue on Friday at Victoria Gymnasium when HotShots clash against Mont Fleuri.

In the men’s division one league, Anse Boileau-based Drifters are presently leading the table after sneaking past Baya 67-66 on Friday, taking advantage of the cancelled match between PLS Hawks and Mont Fleuri Dawgz on Sunday.

After Drifters narrowly won the first quarter 18-17, both teams went head to head throughout the whole match staying level on score – 17-7, 13-13 and 19-19 – during the three remaining quarters of the match.

It was the single point advantage from the first quarter that made the difference in the match, giving Drifters the narrow 67-66 win, steering them to the top of the league table.

Arnaud Arissol was Drifters’ top scorer with 28 points, while with 24 points Okafor Ebuka led the scoring for Baya.

Third-placed Beau Vallon Heat collected their sixth win this season by defeating Premium Cobras 71-63 to bring their points tally to 14 from six wins and two defeats in eight matches played.

In the third quarter, a more organised Premium Cobras threw everything into the match despite losing the quarter 21-23.

They however managed to redeem themselves in the fourth and final quarter, outscoring Beau Vallon Heat 19-11, but the latter managed to hang on to their advantages from the previous three quarters to win the match 71-63.

Captain Timmy Adam had the hot hands for Heat with 22 points, while captain Alao Solomon led the scoring for Cobras with 20 points.

The defeat keeps Cobras fifth overall on 11 points from three wins and five defeats out of eight matches played.

AB Boys beat PLS Suns to close in on leaders

Another Anse Boileau-based team ‒ AB Boys ‒ have moved up into second spot on the men’s division two league table after registering a 65-48 win over PLS Suns in their last league match on Saturday.

Among the top contenders for first-place place finish in the classification league prior to the play-offs, AB Boys won the first quarter 12-6, before clinching the second 12-10 for a 24-16 advantage at half-time.

Boasting a stronger line-up, AB Boys came out stronger in the third quarter of the match, winning it 24-14, extending their overall lead to 48-30 at the end of the period.

The young PLS Suns players under the guidance of coach Alain Estro did not throw in the towel and managed to narrowly win the last quarter 18-17, despite losing the match 48-65.

Franchesco Boniface scored 19 points for AB Boys, while it was once again Japha Evenor who led the scoring for PLS Suns, this time with 11 points.

AB Boys are now second behind leaders Anse Etoile with the same points tally ‒ 22 ‒ from 10 wins and two defeats in 12 matches, but trail the leaders on the head-to-head rule.

As for PLS Suns, they are presently fifth overall on 18 points from five wins and eight losses in 13 matches played.

Mont Ballerz have moved into sixth position on the league table after their 37-34 victory over Anse Royale on Sunday.

In the third quarter, Anse Royale added 18 points to their total, while Ballerz scored six points, bringing the overall score to 29-12 at the end of the period.

It was only in the fourth and final quarter of the match that the two teams upped the tempo with Ballerz scoring 25 points, compared to only five for Anse Royale, allowing the former to win the encounter 37-34.

Ron Estico was Ballerz’ top scorer with 16 points, while captain Ryan Volcere led the scoring for Anse Royale with 14 points. 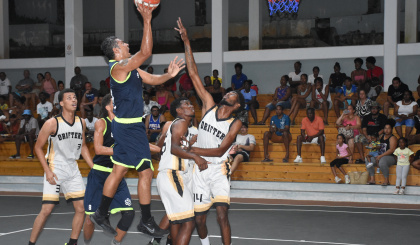 Only one point separated Baya and Drifters at the end of their encounter (Photo: Roland Duval) 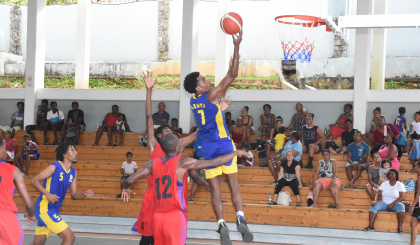 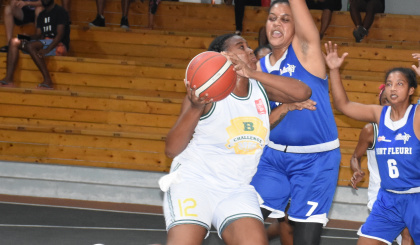 Irene Bau of B Challenge face off against Sarah Rose of Mont Fleuri (Photo: Roland Duval) 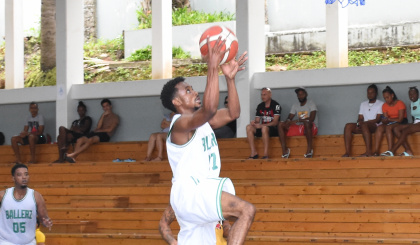