Apart from being the highest graded Seychellois karateka in the world, Shihan Moustache is also the only local karateka to hold the post of international technical director, continental director for Africa as well as being an executive board member of the IKAK.

In Singapore, Shihan Moustache met up with the head of IKAK, Kancho Peter Chong 9th dan and training seminar was held at the famed Gurkha Contingent Dojo of the Singapore police. Senior members from the Main Honbu dojo also participated in the training seminar. The participants were taken through Ido Kihon (standing basics), Ido Geiko (moving basics), basic and advanced Renraku (combinations).

Shihan Moustache then accompanied Kancho Peter Chong to the Philippines where he taught at two dojos in Antipolo. The Uchideshi dojo is dedicated specifically to the Uchideshi who are live-in students who undergo a rigorous training programme of six months. In view that he has trained two Uchideshis locally in the past, Shihan Moustache had been tasked with their training.

The current batch of Uchideshis comprises 13 students ‒ 12 males and one female ‒ coming from Myanmar, Malaysia, Ethiopia, Burundi and the Philippines. Shihan Moustache took them through Ido Kihon, Ido Geiko, Renraku and kata (forms). As the Uchideshi was going to participate in the National Karate Tournament the following weekend in Bicol, Shihan Moustache also concentrated on blocking and fighting techniques, conditioning exercises and pad work.

Training sessions were also held at the Antipolo dojo where the students benefitted from fighting techniques training in preparation for the Bicol tournament. Students from other dojos also participated in the training seminar. Students from the two countries appreciated the training and knowledge imparted to them by Shihan Moustache.

Shihan Moustache later accompanied Kancho Peter Chong to Bangkok where they discussed several issues including the World Tournament scheduled for next year in Singapore. 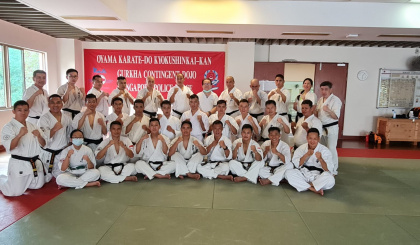 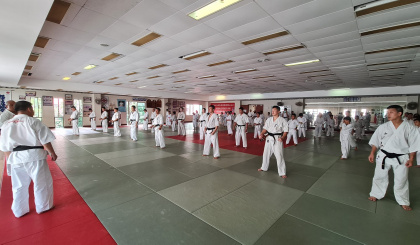