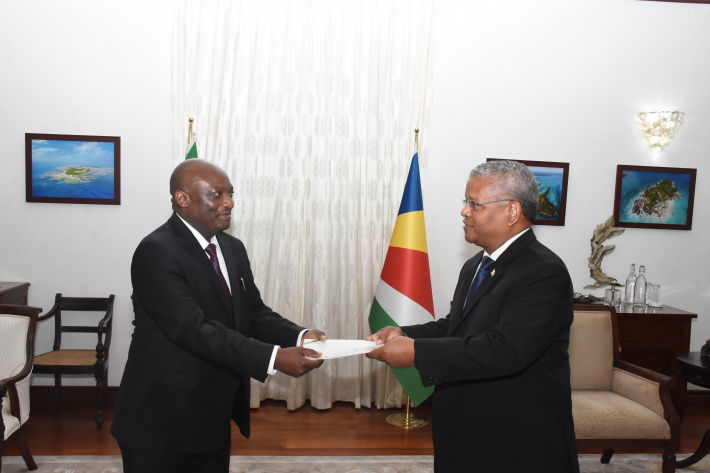 Seychelles and Tanzania have agreed to push for the signing of an agreement, termed the General Framework Cooperation Agreement, that will pave the way for collaboration in various areas.

It was the newly accredited Tanzanian high commissioner to Seychelles, Dr John Stephen Simbachawene, who made the statement yesterday morning, after presenting his credentials to President Wavel Ramkalawan at State House.

Speaking to the local press, Dr Simbachawene said the two countries have many opportunities for trade and investment, and this should be possible after signing this new agreement.

“Like in Tanzania we have a very big land, minerals, tourism, so we are inviting investors from Seychelles to come to Tanzania as well as Tanzanian people can come to do business here,” said the high commissioner.

Maritime security was another area of discussion since the two countries share the same ocean space. Dr Simbachawene said similar to Seychelles, his country faces the same challenges posed by drug trafficking mainly from Pakistan and Iran. The two countries have therefore pledged their commitment to reinforce their fight against this illegal trade.

“They are coming through the Indian Ocean and it affects a lot of people especially children so Tanzania and Seychelles have to work together to combat the illicit trade,” he said.

The two also talked about the existing relationship between their countries’ prison services. Since 2018, a group of 20 Tanzanian prison officers have joined the Seychelles Prison Service to beef up security at the Montagne Posée prison. In January this year the second cohort of 13 Tanzanian prison officers joined the local services and the high commissioner said he was committed to support the relationship in this area.

Another area that the two sides talked about was promoting the Swahili language, the official language of Tanzania, which is also spoken in many countries in the eastern and southern parts of the African continent. The language is also promoted among SADC and African Union countries, of which Seychelles is a member.

Dr Simbachawene said his country was therefore prepared to introduce and teach Swahili in schools and university in Seychelles.

“Tanzania is ready and we are committed to facilitate the promotion of Swahili language in the Seychelles.”

He also talked about the judiciary and how more Tanzanian judges could join Seychelles’ judicial system.

The high commissioner, who is also the permanent representative to the United Nations Environment Programme (Unep) and UN-Habitat, has also pledged his commitment to make sure the relationship between Seychelles and Tanzania during his tenure becomes stronger.

It should be noted that Seychellois Marievonne Pool is the honorary consul of Seychelles in Tanzania.

Diplomatic relations between Seychelles and Tanzania was established in November 1986.

Dr John Stephen Simbachawene is the fourth Tanzanian high commissioner to Seychelles and will be based in Nairobi, Kenya.