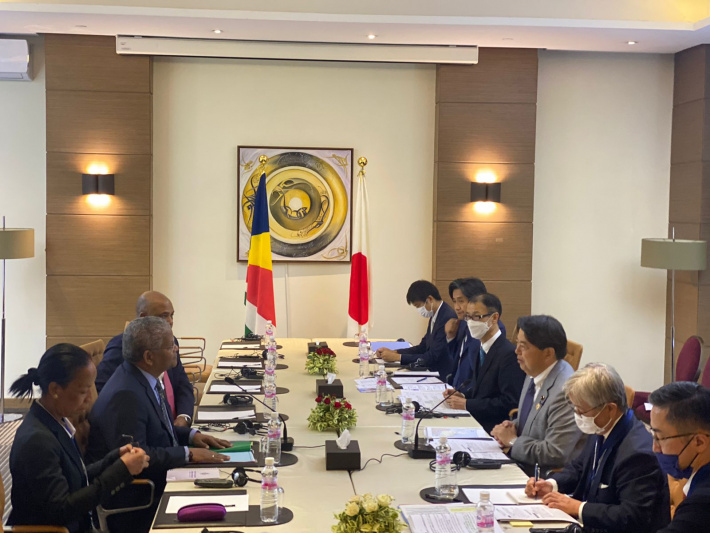 On his second day in Tunisia, where he is attending the Eighth Tokyo International Conference on African Development (Ticad 8), President Wavel Ramkalawan met with Hayashi Yoshimasa, Minister for Foreign Affairs of Japan and also the special envoy of Kishida Fumio, Prime Minister of Japan.

President Ramkalawan congratulated Japan on successfully co-hosting Ticad 8. He once again extended condolences to the government and people of Japan following the assassination of former Prime Minister Abe.
Minister Yoshimasa congratulated President Ramkalawan on a successful democratic transition process in October 2020.
During the meeting, they discussed ways in which the two countries could further enhance collaboration in various sectors.

President Ramkalawan expressed his appreciation for all the support given to Seychelles by Japan in areas such as maritime security, capacity building, health, fisheries, disaster risk management and for funding through grant assistance, at a cost of 10 million yen (R1.3 Million), the renovation of the ex-maritime school into a school for the deaf which was completed in 2021.
On his part, Minister Yoshimasa expressed his gratitude for the support given by Seychelles to Japan’s numerous candidatures in international organisations.
Other issues discussed during the bilateral meeting were related to climate change, the Blue Economy, support for a multidimensional vulnerability index for small island developing states and the possibility for Japanese investments in sectors such as fish processing and waste water treatment plants.
Also present at the meeting were Conrad Mederic, ambassador of Seychelles to the African Union and to Ethiopia and Lindy Ernesta, director general, Bilateral Affairs Division of the Foreign Affairs department.
It is to be noted that Kishida Fumio, the Prime Minister of Japan, is attending the Ticad 8 summit virtually, from Tokyo. Minister Yoshimasa is in Tunisia for the Ticad 8 summit.  He is also there as a special envoy of the Japanese Prime Minister. 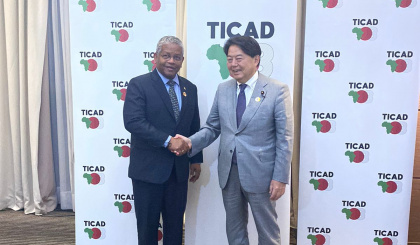