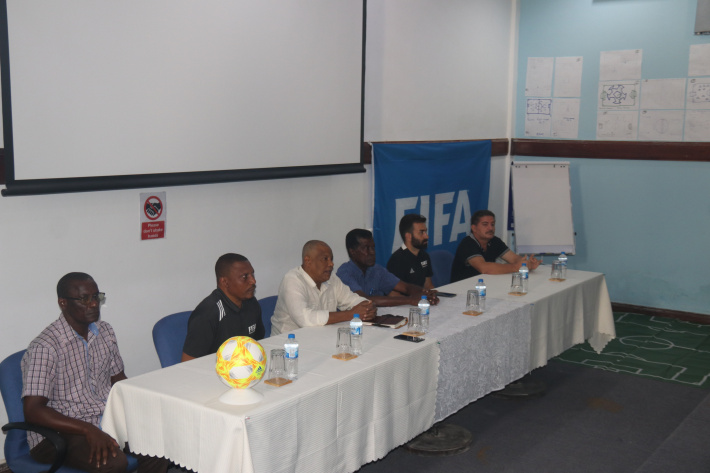 Local referees get an insight into the game’s latest guidelines

In its attempt to boost the quality of officiating as well as the level of local referees, the Seychelles Football Federation is presently hosting training, also aimed at familiarising match officials with the game’s latest guidelines.

The Fédération Internationale de Football Association (Fifa) Referee MA Course, officially launched on Monday, is designed to help member associations to improve the level of their referees and assistant referees, and also to create uniformity regarding the interpretation of the football’s laws of the game, including guidance on key technical topics such as handball, challenges, positioning, tactical fouls and offside among others.

It will also help match officials to better manage the games that they are assigned to, while knowing more about their overall objective as a referee, or referee assistant.

The training, which is being conducted by Fifa referees instructor Zimbabwean Felix Tangawarima and Italian physical instructor Giuseppe Galvano, was officially launched by vice-president of the Seychelles Football Federation (SFF) Dolor Ernesta, in the presence of chief executive George Bibi.

Mr Ernesta said other than attaining a higher level, it is equally comforting to see the increase in the number of female officials, something which he said will be beneficial for the SFF, especially in the development of women’s football.

He said, in spite of having Video Assistant Referee (VAR), refereeing is constantly becoming challenging , while the game of football itself is becoming faster and more scientific, and therefore it is equally crucial that match officials continuously step up their levels.

This, he said, should be done through discussions, consultations and most importantly through continuous training.

On his part, Tangawarima who had previously conducted several training in Seychelles said, this time around, he is pleased to see the involvement of several female officials.

He said it is the duty of the trainers to push, encourage and make sure that they reach the necessary level they need to.

He added that historically, Seychelles has produced very good, high and top-class referees, even World Cup quality, while the training programme is primarily aimed at the new generation of officials, since most of the experienced ones are reaching the end of their careers.

Mr Tangawarima reminded the officials that the instructors and federation can help and provide for them to a certain degree, while their success will depend purely on their commitment and passion.

He said 80 percent of the training will concentrate on the field of play, with only 20 percent in the classroom. 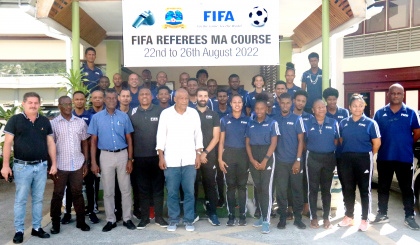 The referees and instructors in a souvenir photograph with SFF officials 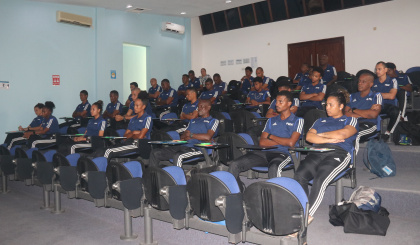