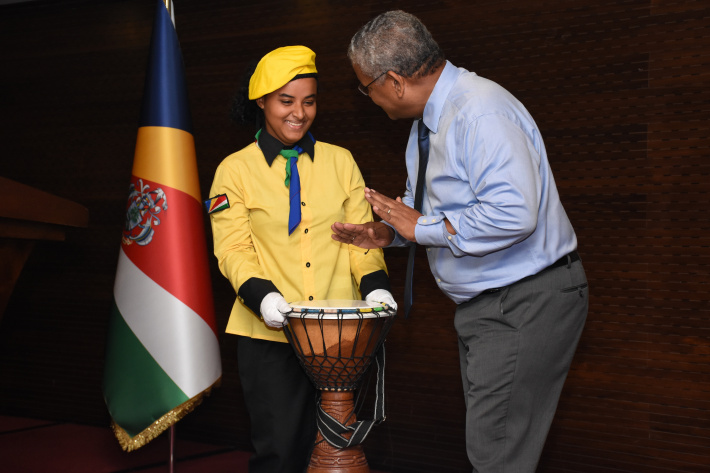 President Ramkalawan setting the tone for the start of activities

The 23rd Youth Festival was launched yesterday morning in a short but vibrant ceremony at the Savoy Resort & Spa during which four elders were recognised for having devoted their lives working with different youth groups and movements on different development programmes such as culture, sports and recreational activities.

The festival launch took place on International Youth Day commemorated this year under the theme ‘Intergeneration Solidarity’ thus the reason for recognising the four elders for their contributions in youth development and empowerment.

A few drum beats by President Wavel Ramkalawan and a young citizen officially marked the launch of the activities of the Youth Festival which will span over two weeks and is being celebrated under the theme ‘Imagine the Possibilities’.

The ceremony yesterday was also punctuated at intervals by poem recitals, vibrant performances by different youth groups who were accompanied by music provided by an all female band put together by the Seychelles National Youth Council ( SNYC).

Present at the ceremony were representatives of different youth groups, ministers, MNAs, government officials among other guests.

Addressing the youths and guests gathered for the event, the deputy chief executive of the SNYC, Ghislaine Belmont, called on the young people to make time for their passions and she   encouraged them not to be afraid to move to the next step as when they don't go the extra mile they become slaves to conformity.

In the age of innovation Ms Belmont reminded them that this is the time for them to take chances on all the opportunities made available to them.

The Minister for Youth, Sports and Family, Marie-Celine Zialor, for her part led the audience through a reflection on the International Youth Day theme for this year which is ‘Intergeneration Solidarity’.

She stated that this is a platform to give the possibility to close the generational gap. She further added that this will be good for the development of the country when the youths learn from the elders and vice versa. She called on the young people to imagine all the possibilities open to them and to avoid getting involved in drugs, antisocial behaviour, getting pregnant when still a teenager but to realise their dreams and be anything they want to be.

President Ramkalawan highlighted that with the theme the youths should reflect and imagine all the possibilities that the country is offering them.

The head of state said he is worried for the youths but he also has hopes for them.

He has called on them to think of their future and all the possibilities open to them.

He added that when they dream of all the possibilities available to them, the young people will be able to formulate what they desire.

He told the youths that they should have dreams.

“This is what will make you a winner and for you to accomplish your dreams, you must work hard and put in all your effort to succeed,” the head of state emphasised.

President Ramkalawan also encouraged the youths to listen to themselves, to analyse their situation and review the direction they are heading into.

The kick-off of the festival was followed by the first activity which was the launch of the ‘Think Tank’ platform for young professionals aged 18-30 years old to share ideas and debate on issues affecting them and their development.

Our selection of photos show some highlights of the ceremony yesterday. 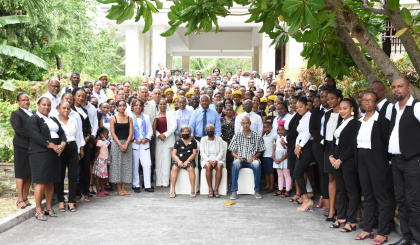 A family photograph at the end of the ceremony 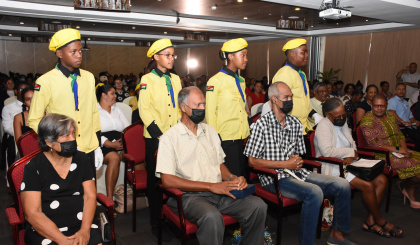 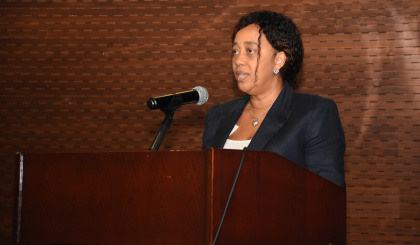 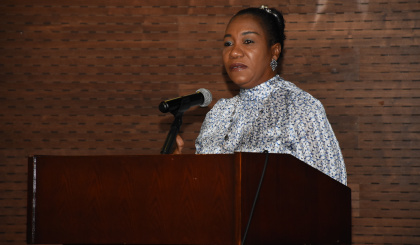 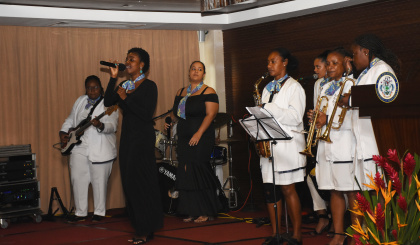 The all female band in action 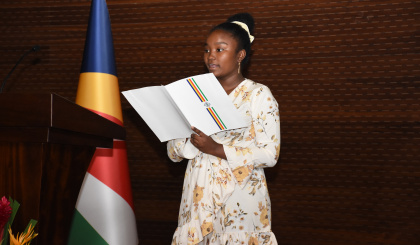