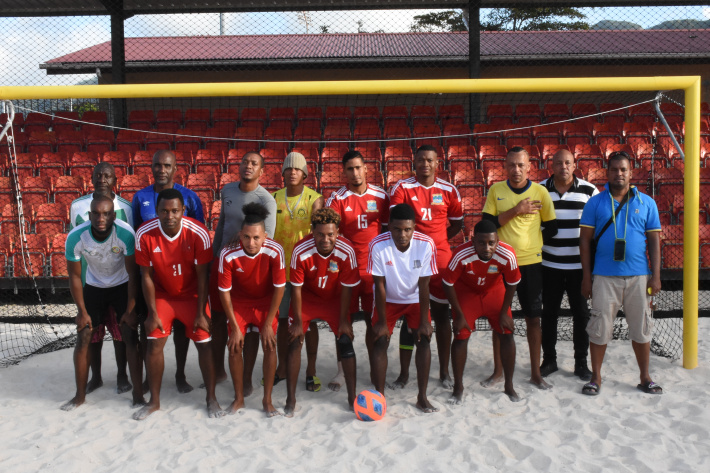 The Seychelles national selection ready for the challenge ahead

The Seychelles national beach soccer selection will leave the country today for Madagascar where they will face the Barea in the second leg of the qualifiers for a spot in the final eight of the Africa Beach Soccer Cup of Nations scheduled to take place in Mozambique from October 21 to 30.

In the home game, two weeks ago at the Roche Caïman beach soccer arena, Seychelles lost 2-5 to the Malagasy squad, making the chance of qualification a steep road, with the Barea having the support of their home crowd.

Four goals from Jean-François and one from Bessie in the home leg match were enough to dim the chance of qualification for the Seychelles selection which has gone through several amendments, with new players being brought in.

Speaking to Sports NATION, coach Alpha Baldé said the team is well prepared both physically and mentally and they are ready to go out and give a good performance.

He said a win is the main target, even if it will not be enough to qualify for the final stage of the competition.

The away match will be played on Sunday at the Mahajunga Beach, while in the other qualifiers Senegal will face Cameroon, while Nigeria will play against Libya.

Morocco will see their fate decided when they meet Côte d’Ivoire, while the Comoros will play against Uganda.

The black Sharks of Ghana will play against the Sand Pharaohs of Egypt, and Malawi will clash against Tanzania for a spot in Mozambique.

Fourteen nations will battle to determine the best seven which will be joining hosts Mozambique in the main stage.

The Africa Beach Soccer Cup of Nations (BSAFCON) is the main championship for beach soccer in Africa, contested between senior men's national teams who are members of the Confederation of African Football (Caf).

The coaches are Alpha Baldé, Travis Julienne and Edmond Robert, while Roddy Rath is the team manager.