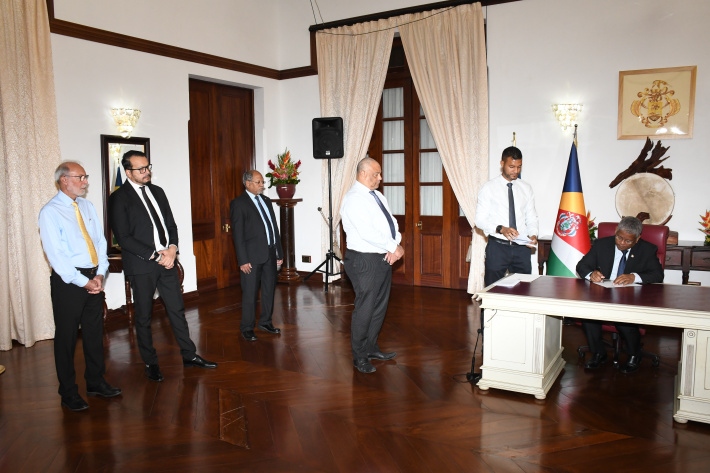 “The reason I am assenting to this law in public is because it is a new law which gives an indication in which direction we want the country to go and how we are in the process of modernising our legal system so that people have more access to the law,” said President Ramkalawan at yesterday’s ceremony.

The Probates (Re-sealing) Act provides for the resealing of probates (official proving of a will) and letters of administration granted by a court of probate in a country listed in the Act in respect of the estate of a deceased person and other matters related to it.

“There are many people who are living abroad and have heritage here in Seychelles and the fact the executor is appointed in that country, he cannot come here in Seychelles and see how to share the heritage. There have been some complications in the Court here and this Act will make it easier for the executor to function in the country and from the list of countries that have been increased. The Court will approve the Executor here and he/she will have to work under the Seychelles Law.”

What is Resealing of probate or letters of administration?

Where a court of probate in a recognised jurisdiction has, either before or after the coming into force of this Act, granted probate or letters of administration in respect of the estate of a deceased person, the probate or letters so granted may, on being produced to, and a copy in accordance with section 5 thereof deposited with, the Curator, be sealed with the seal of the Curator.

A person who seeks to reseal the grant of probate or letters of administration under subsection (1) shall submit to the Curator a petition supported by an affidavit accompanied by — (a) a copy of the grant of probate or letter of administration in accordance with section 5 that the petitioner seeks reseal; (b) the death certificate of the deceased; (c) proof of the person's identity of the applicant; (d) affidavits, or a declaration in the affidavit in support, of alias where necessary in order to explain or reconcile any differences or discrepancies in names which appear in the supporting documents.

Curators from 64 countries eligible to operate under this Act

The President assented to this bill in the presence of Vice-President Ahmed Afif, Chief Justice Rony Govinden, the leader of government business in the National Assembly, Bernard Georges, and the Attorney General Frank Ally.