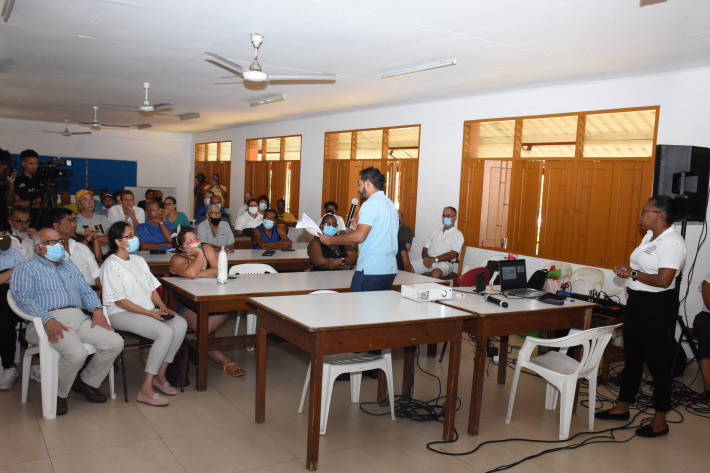 A project to redevelop the Reef Hotel at Anse Aux Pins met strong opposition from those who attended a public meeting on Saturday organised to discuss the proposed plan.

The Environmental Impact Assessment (EIA) public meeting, held at the Anse Aux Pins primary school, was organised by the Waste, Enforcement and Permits Divisionunder theMinistry of Environment to discuss and take on relevant concerns of the Anse Aux Pins and Au Cap communities regarding the re-development of the Reef Hotel.

The hotel, which closed down in 1977 on account of bankruptcy, was taken by the Beach Comber from 2002 to 2019 in which staff of the Beach Comber resided. After that the hotel was taken over by the current investor who was present at the meeting, Dr Krishan Malhotra, a Mauritian national with his architect, Bobby Mukherji, who won a bid to purchase the hotel.

First Invest Limited, a company incorporated in the United Arab Emirates (UAE) as an International Business Company has acquired 76 shares in Reef Resort Limited from Kingfisher 2 Limited. The second company to purchase the remaining 24 shares for the total consideration of $1,441,200 is Deramann Limited, a domestic company registered in Port-Louis Mauritius and for which the sole shareholder and director is Dr Jadoo Hermann Dookun, also a Mauritian national. Currently the hotel is owned by ‘Reef Resort Limited’.

The director general for Waste, Enforcement and Permits Division, Nanette Laure, opened the meeting, detailing the scoping process to members of the public and various organisations present.

The moderators of the meeting – Tessa Henderson and Nimham Senaratne – sought permission from the participants on behalf of the investor and his team to moderate the meeting in English, which is usually chaired in Creole, for the benefit of the investors’ team.

The meeting kicked off with Dr Malhotra introducing his vision for the re-development called project ‘refresh’. This involves the demolishing of the current structure.

Dr Malhotra noted that as much as possible they will reuse the material from the demolishment for the reclamation. The reclamation will be the second part of the re-development which involves almost two islands being built off the eastern coast and connecting with the hotel by two bridges. The hotel will contain 200 rooms compared to the original plan which was supposed to contain 135 rooms and 9 residential apartments.

He added that the food and beverages outlets will be accessible for the general public.

He further added that the hotel should contain the largest banquet room which can be used for weddings, events etc.

Another structure that will have direct access to the public is a beach lounge and bar with its own ‘dedicated’ path compared to other structures.

The participants also saw a presentation by the architect for the re-development, presentations by coastal modelling team and the construction company.

Dr Malhotra stated that they went into extensive consultation with the Ministry of Tourism and was told that reclamation was permitted on the east coast.

He further added that in consultation with the Ministry of Agriculture, Climate Change and Environment it was agreed that if they build on the reclaimed areas to make it single storey.

He added that the same ministry advised them to construct the lounge and bar after the main hotel for traffic management.

In 2018 the investor went in consultation with SIB (Seychelles Investment Board) with its plans inclusive of the reclamation plan and the entire master and it was approved.

The public had very strong opinions on the matter with the most pertinent being the reclamation for the two islands. The point brought forward by proportional member of the assembly, Flory Larue, and which was widely acclaimed was that the investors bought the land and the hotel but they did not purchase the sea. The public also noted that for the reclamation the developers will touch 1.2 hectares of sea grass for which Seychelles has pledged 100% the protection and management of its entire seagrass (and mangroves) coverage by 2030.

Another major concern of the residents is how the beach will be affected. They noted that already with the reclamation of Ile Soleil the whole coastline has seen a drastic change from before.

It was also noted that many developers in the past has claimed employment opportunities for the community, however this has not been the case, something that the participants called an ‘employment ruse’.

Dr Malhotra stated that the foreign nationals employed at the hotel will have some sort of partnership with the Seychelles Tourism Academy (STA) to train the students for a while throughout their employment and that it is the people’s responsibility to accept the training.

“Training and upscaling is extremely important,” he said. “When I met with the chairman of STA, I suggested to him that part of my condition in selecting exterior professionals and well knowledgeable people that will be coming from overseas as alternate terms and conditions of employment, we will insist that they spend some time at the STA for free to train our local pupils.”

The habitants of Anse Aux Pins also noted that the construction of the islands will also have adverse effects on the coast as seen from Ile Soleil to which the investors’ team tried to assure them that there will be proper flushing of the channel. The channel will start from the coastline in front of the hotel whereby the beach will be cleaved in two and the swimming pool will edge the sea directly. This will be situated in the middle of the two islands about 1.50 to 2 metres of the coast. A participant also pointed out that the ‘bridges’ will also have mini reclamation and thus completely alter the seabed.

A representative from the Ministry of Land and Housing and DG Laure from the MACCE firmly reiterated that no plans has been approved as of yet. The public was also presented with the coastal modelling team who explained the study they claimed to have performed on the coastline and the hydrodynamics of the lagoon.

Dr Malhotra stated that “I am responsible for protecting this hotel and its future from erosion.” He emphasised that they kept away from the Maldives design as in Maldives you have a bridge and villas all across on stilts and if villas are put on the stilts then you will see a lot of stilts in the shallow waters which turns into visual pollution. He noted that the islands they have brought forward will instead have trees, plantation and villa will be hidden as well as no stilts visible which according to him is inherently preferable to protect his site from coastal erosion by building something that is much more attractive. 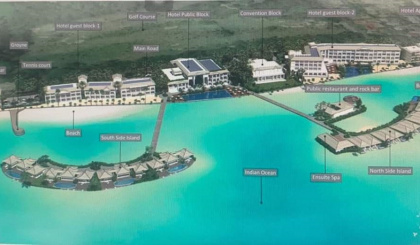 A plan of the proposed development