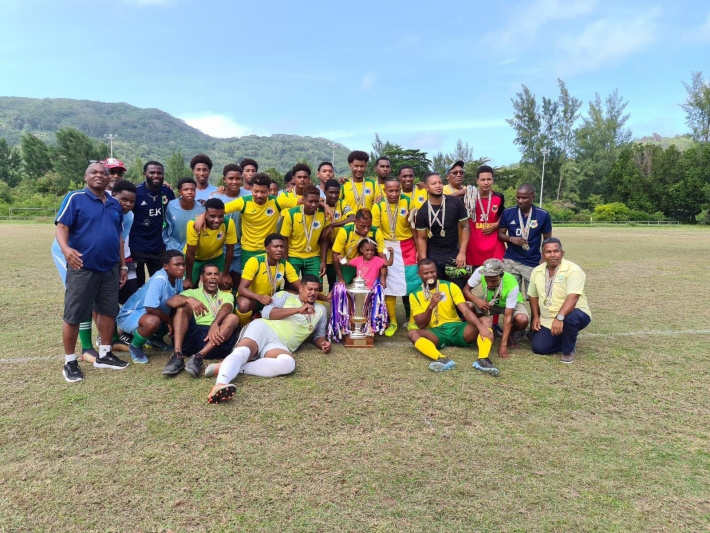 After winning the Inner Islands title, La Passe are the winners of the Seychelles Football Federation Premier League Championship following an easy 3-0 win against Foresters without having to break a sweat.

Scheduled to meet Foresters yesterday afternoon in their backyard at the L’Union playing field, La Passe players dressed up only for the photo session as their Mahe-based opponents did not make it to La Digue.

Winning the match by walkover, La Passe brought their points tally to 15 after four victories in five matches, scoring 10 goals and conceding 6.

Following their 2-1 victory against LightStars last night, St Michel finished as runners-up with 13 points after 3 wins, a draw and a loss.

Since the SFF did not get the green light from the health authorities to begin the new season 2021-2022 in August to end in May 2022 as planned, the SFF Premier League Championship was a short one.

The SFF had expected to complete the SFF league in May in time to resume the 2022-2023 league season in August 2022, but it was completed yesterday. As a result, the SFF had to sacrifice two knockout competitions ‒ Airtel Cup and SFF Cup ‒ last year.

The men’s Premier league was designed in that manner to minimise the cost of travel by teams in this time of the pandemic.

The three top finishers from the two leagues ‒ St Michel (first), Foresters (second) and St Louis (third) in the Mahe league, La Passe (first), Côte d’Or (second) and LightStars )third) in the Inner Islands league ‒ clashed with each other in the one legged SFF Premier League Championship.

All six teams who competed in the round-robin SFF Premier League Championship were given bonus points based on their ranking in the first phase. First-placed St Michel and La Passe were given three points apiece, runners-up Côte d’Or and Foresters two points each, while St Louis and LightStars received one point each.

As the Mahé Premier League is an open league, the remaining five teams continue playing each other over one round to accumulate points to earn the highest finish possible. The team who finish last will be relegated to the Championship League, while the one who take seventh position will meet the Championship runners-up in a two-legged playoff.

Meanwhile, Bel Air Football Club are the champions of the Championship League with appoints tally of 36 from 13 games played (12 wins and 1 loss) to secure a Premier League return.

Bel Air Football Club last played in the country’s first division in 1996 ‒ three years after the reintroduction of club sports in Seychelles in 1993. After finishing a place before last in the first division, Bel Air met second division runners-up Ascot on Tuesday December 3, 1996 and lost the play-off match 1-4. Bernard Andoise scored their consolation goal from the penalty spot in the final 20 minutes after Ascot had taken a four-goal lead thanks to goals by Percy Laramé (11th and 69th minutes), Felix Bistoé (20th minute) and Octave (73rd minute).