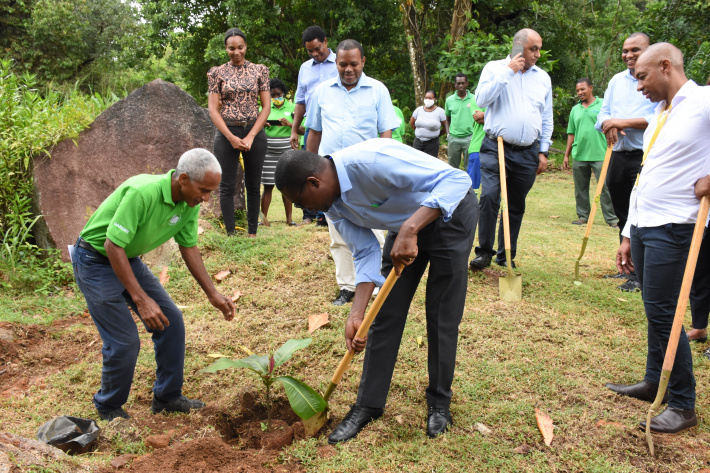 A tree-planting activity was held yesterday afternoon at the Biodiversity Centre, Barbarons, to mark the World Desertification and Drought Day celebrated on Friday 17, 2022 under the theme ‘Rising up from drought together’.

In a short speech for the occasion, Minister Joubert said that the slogan reminds us that desertification and drought are two of the many challenges that the world faces and that it further shows we are responsible for the many problems we are facing in the world among which is water.

Minister Joubert noted that as water is considered to be the source of life, everything must be done to protect this essential resource for our well being as well for the driving of our economy, which at times is not always available.

He added that long periods of drought which we have witnessed for the past 50 years, have led PUC to put in place stringent measures to better manage the water resources and to ensure that each home has access to clean and fresh water.

He stated that despite we are located in the tropics, we remain vulnerable and are threatened by the impacts of climate change which are common in small island states (Sids).

He added that we all, including children, have to play our role to contribute to the restoration of degraded forest to minimise the risk of desertification and drought.

“It is therefore important that we prepare ourselves to deal with such event. Restoring degraded forest areas can help to bring back ecological and natural functions. We cannot do it alone. We encourage stakeholders to join hands to find solutions to some of the problems we have within catchment areas,” said the minister, who noted that the La Gogue Dam is in its final stage of completion to help relieve some of the pressure on our water resources.

Bwa Rouz is a drought resistant endemic plant. It can grow up to 20 metres tall and they can be found scattered individually or in small groups of trees along the coast and also in mountainous areas on Mahé, Silhouette, Praslin and Curieuse. In spite of being cut constantly, the tree is lower risk near threatened and still rather common. The trees were chosen to be planted to help increase its population at the centre. 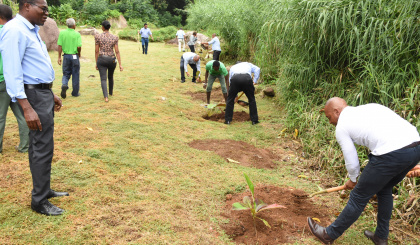