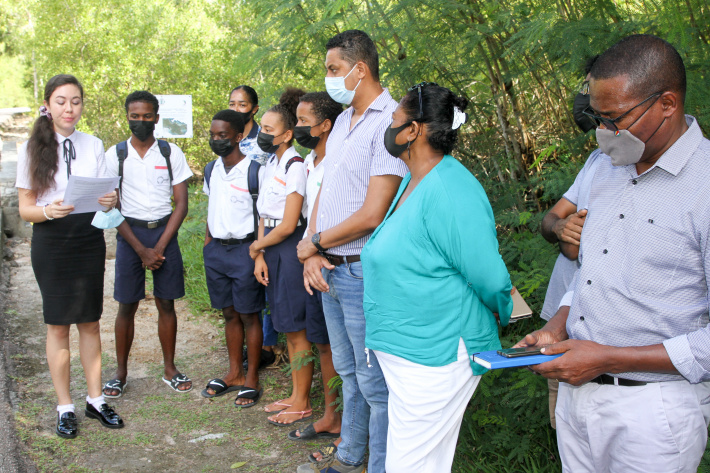 Seychelles is a coastal state with a mountainous topography and a narrow, flat coastal strip. Due to this, most development is concentrated on the coastline and is expected to increase in development density in the coming years.

This presents a challenge for the government in terms of balancing the economic prosperity of the country and environmental sustainability. Threats which have been identified include poor planning practices when it comes to integrating water bodies with development, as well as the effects that exacerbated climate change and variability is having on the small island state in terms of managing its water supply for human as well as ecological needs.

In order to try to minimise these challenges, the department of Climate Change and Environment of the Ministry of Agriculture, Climate Change and Environment (MACCE) was given the opportunity to apply for a R100,000 grant under the Conservation Climate Adaptation Trust of Seychelles (SeyCCAT) Blue Grant Fund strategic 4: To develop and implement risk reduction and social resilience plans to adapt to the effects of climate change, for a project to map and monitor rivers and mangrove habitat for the sustainable development of Praslin island.

The ministry has decided to focus on Praslin island, the second most developed island in the archipelago hosting approximately 7000 inhabitants, due to the budget and capacity constraints it currently faces to achieve the project on Mahé island, where the majority of the population reside.

Funding for the project entitled ‘River Mapping and Monitoring and Mangrove Habitat Mapping Project for the Sustainable Development of Praslin Island’ was used for the following purposes:

Sophie Morgan, the project manager, shared with us the raison d’être behind such project. “When we were contacted by SeyCCAT about the grant, we discussed as a department to identify a possible project. We realised that for a long time we needed a proper map of rivers and mangroves habitat but we did not have the appropriate finances for same. So this was a great opportunity and we chose 10 sites on Praslin for the project.”

The project, which started in November 2019, was delayed by Covid-19 and what was expected to be a one-year project needed extension. It is expected to be beneficial to the general population of Praslin island, the Planning Authority, the Ministry of Agriculture, Climate Change & Environment, the scientific community, the Public Utilities Corporation (PUC), and the Seychelles Meteorological Authority (SMA).

Now that the project has come to completion, various stakeholders were introduced to it in a small ceremony held recently at the site itself. This is to ensure ownership, support and raise awareness on issues the community is facing as well as sensitise them of how the project will support them in data needs and building resilience against disaster events brought on by climate change.

In his address to the attendees, Minister Joubert thanked all stakeholders who have contributed towards the realisation of the project which he described as an example of work being done for innovative financing in our environment. Such projects not only benefit the local community but also help in fighting the impacts of climate change on our islands.

He praised the collaborative work of all stakeholders and how this will help in better community development.

“When we join forces together we can achieve so much. This project will allow us to work together to ensure a more sustainable future for both our environment and community. Climate change is having much impact on our islands and our collaborative effort will help us mitigate the risks.”

Minister Joubert also praised the work of other partners such as Terrestrial Restoration Action Society Seychelles (TRASS) on Praslin which is doing a remarkable contribution in restoring forest areas of the island.

He called on other initiatives or individuals with innovative ideas to come forward and join the fight against climate change.

Minister Joubert then presented the Baie Ste Anne and Grand Anse district administrators and the department of Climate Change and Energy Praslin staff with copies of the mapping work.

The project now hopes for a similar approach, with more funding and having learnt from the challenges and built capacity from the Praslin project, to be achieved on Mahé island. 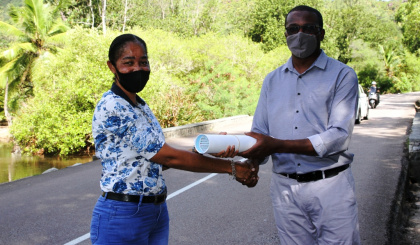 Handover of copies of the map work 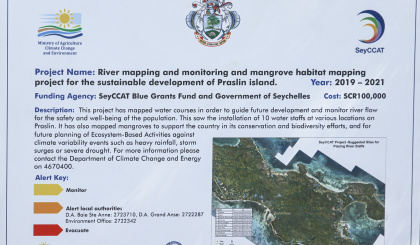