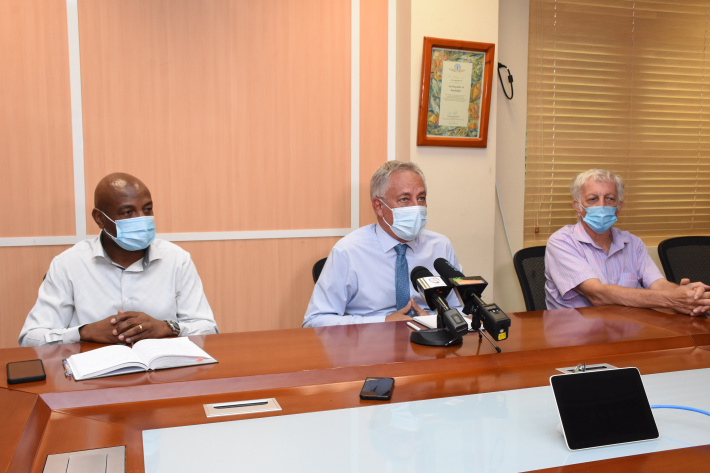 The Minister for Fisheries and the Blue Economy, Jean François Ferrari, has voiced his dissatisfaction with some members of the Indian Ocean Tuna Commission (IOTC) for failing to negotiate for an agreement for sustainable fishing, especially tuna species (yellowfin and skipjack), in the Indian Ocean.

The minister made known his disappointment during a briefing with the press at the ministry’s headquarters, Maison Collet, on the feedback of the IOTC’s 26th session for member states held last week at the Eden Bleu Hotel. Present were the principal secretary for Fisheries, Roy Clarisse and the ministry’s consultant Philippe Michaud.

Minister Ferrari said that no new stock rebuilding plan was adopted for overfished yellowfin tuna and no new management measure was put in place with regard to fishing methods.

He further said that in the absence of a resolution to manage the depleted stock of yellowfin tuna, which has been in the red since 2015, all fishing quotas remain the same.

He added that it will be business as usual for countries to consensus on how to rebuild the population of this species until the next IOTC meeting in February 2023 where members will again try to seek for a solution.

He said that during the recent meeting in the country, some countries stated clearly that they were not going to make any concession and they were not prepared to negotiate on any restrictions or limitations, with regard to the fishing of yellowfin tuna in their waters, put in place by IOTC.

“This cannot be, because if we want to rebuild the stock, everybody has to make an effort. Seychelles will make an effort if all other member states push in the same direction,” said Minister Ferrari who mentioned Somalia, Iran, Pakistan and Oman among some other big countries who have decided to flout IOTC’s restriction measures.

Minister Ferrari went further to state that with no reached agreement to manage the stock, it would not be fair for those countries, especially for commercial reasons, to continue to deplete the stock by all available means, including using banned fishing gears and also not reporting on their catch to IOTC.

He noted though that with the backing of new members on the commission, the Seychelles delegation have managed to bring to the table some interesting points and suggestions. He hailed the recent meeting of ministers for fisheries of Indian Ocean Islands that has seen much better cooperation and collaboration between those countries on the sustainability of the yellowfin tuna.

Minister Ferrari stated that our country, partly dependent on the resource, has made much effort and will continue to make more effort to see that the tuna fishing in the Indian Ocean is sustainable. He said that the country, along with its fishing partners, has made great improvements to catch tuna in a profitable but sustainable manner.