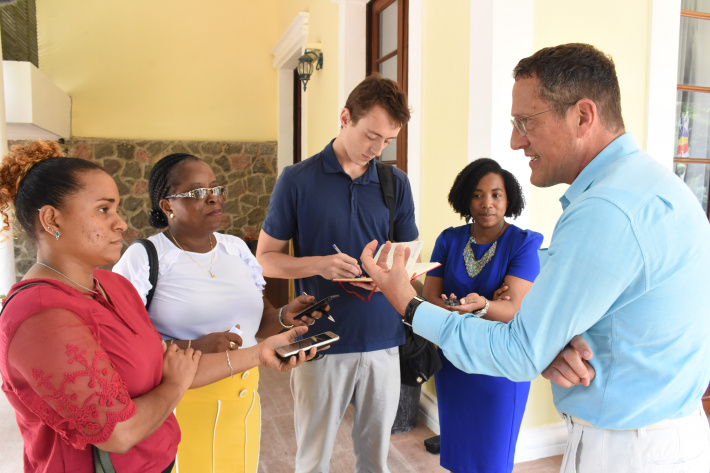 Local journalists interviewing CNN news anchor Richard Quest at State House on February 24, 2020. President Ramkalawan have urged all journalists to work impartially and to conduct their work based on the principles of truth, knowledge and education in or

Reporters Without Borders (RSF), which promotes and defends the freedom to be informed and to inform others throughout the world, has also published in its most recent report that Seychelles is one of the very rare African countries where most journalists are women.

President Wavel Ramkalawan seized the opportunity to congratulate local media practitioners on this achievement. "I wish to convey the country’s appreciation to all journalists and media houses for their hard work. Your efforts for the continued advancement of freedom of expression and in ensuring our population remains well informed plays a crucial role in the continued progress of the country. I urge all journalists to work impartially and to conduct their work based on the principles of truth, knowledge and education in order to allow our population to better understand the real issues around them.”

The president added that during his address on April 26, 2021 to commemorate six months since he took office, after Seychelles had progressed 11 points on the Reporters Without Borders (RSF) Freedom of the Press Index, he launched a challenge for Seychelles to move from 52nd to under 25th worldwide and also to become first in Africa.

“I am proud to note that this target has not only been fulfilled but has even surpassed our expectations. For the first time ever, we are first in Africa and ranked 13th worldwide, ahead of France, United Kingdom, Germany, Switzerland, Australia and the United States. Seychelles has climbed 39 places,” added President Ramkalawan.

He noted that “the challenge today is for us to do even better.”

“I call on more young people to take up the noble career of journalism and I encourage those already in the profession to give of their very best as they build the fourth pillar of our democracy. Freedom of the press accompanied by freedom of expression are two principles that will help Seychelles become a great democracy with accountability and good governance as key principles,” concluded President Ramkalawan.

The 2022 World Press Freedom Index, which assesses the state of journalism in 180 countries and territories, highlights the disastrous effects of news and information chaos – the effects of a globalised and unregulated online information space that encourages fake news and propaganda.

According to RSF, attacks on press freedom are quite rare in Seychelles, first African country in the RSF World Press Freedom Index in 2022. The environment tends to favour the practice of journalism.

RSF stated that “media pluralism, diversity of opinion and the capacity to tackle major issues have been developing in Seychelles for the past ten years or so. Approximately ten media outlets operate in the archipelago. The public broadcast group Seychelles Broadcasting Corporation (SBC) is the most popular and includes two television networks and two radio stations, as well as access to a great deal of international content. TéléSesel, launched in 2017, is the country’s sole private network. Two private radio stations also operate – Pure 907 and K-Radio. There are several print media outlets, including the state-owned Seychelles NATION (which does not receive funding from government) and the privately owned Today in Seychelles.”

They also analysed the political context in which the media houses are operating. “Since the introduction of the multiparty system in 1993, the practice of self-censorship, which was prevalent during decades of communist rule, has slowly dissipated. State-owned media outlets no longer shy away from criticising the government or from reporting on corruption and nepotism. Nevertheless, several publications continue to be aligned with political parties.”

Legally, RSF explained that the Constitution guarantees press freedom. Defamation was decriminalised in 2021 – a major advance that followed the adoption, three years earlier, of a law on access to public information. The confidentiality of sources is protected, and each outlet has its own ethical code. Since 2014, the Association of Seychelles Media Professionals has been responsible for defending journalists and press freedom.

A major reduction in the cost of launching a broadcast media outlet (the price of a radio licence has been divided by eight since 2012) has allowed the entry of new private actors and has broken the state’s broadcast monopoly.

The print sector, which is unprofitable, is hit by high printing and circulation costs in an archipelago of 115 islands. Hence, some publications have been abandoning paper editions in favour of digital publications. The state-owned Seychelles NATION is the last daily newspaper with a printed edition.

Attacks on journalists are quite rare. These mostly take place on social networks, with political party militants generally responsible. Sanctions against media are also infrequent, but can be extremely heavy. In 2020, a newspaper’s conviction for defamation carried a fine of more than 23,000 euros for an article published in 2016. 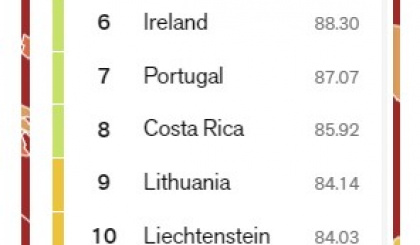 Top-15 countries in the ranking