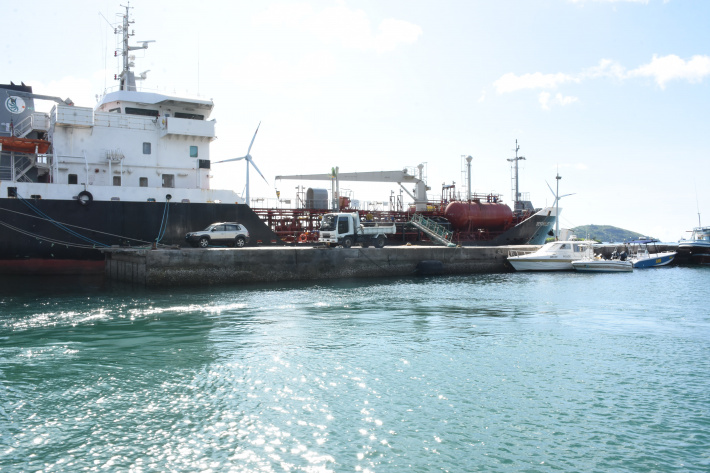 The Seychelles Port will be extendedby 10metres outwards instead of 40metres (Photo: Thomas Meriton)

Representatives of bidding contractors for the Seychelles Port expansion project were yesterday briefed about the dredging and reclamation works of the venture before being taken on a boat tour of the areas to be dredged and reclaimed.

During the pre-proposal discussions that followed it was announced that an adjustment had been made with regards to the extension planfrom 40metres to 10 metres outwards, as costing they received for the full extension of the port (40m) overlaps the budget considerably.

This means that the contract that was supposed to be one has been broken down into two with the dredging and reclamation. Ms Samson further stated that even though there was the adjustment, the Seychelles Port will still meet the international norms but the terminal will have to be more efficient in space usage. The Seychelles Ports Authority’s (SPA) biggest constraint for this project is the environmental factors and port operations.

The priority areas for dredging are the ‘turning bay fin’ near the port and the ex-coast guard area to start the construction of the new port. The area near the lighthouse will also be expanded ‒ the depth and width of the channel ‒ to accommodate bigger vessels and ensure safer navigation. The lighthouse which was declared a national monument in 2011 was the first light house in Port Victoria built in 1872. The SPA has approached the authorities concerned and has acknowledged that the lighthouse has to be relocated as part of the dredging and reclamation project and the SPA and relevant parties have to come up with a solution in that regard.

The expansion of the port will be 10metres across, while the depth of the channel near Saint Anne island will be16metres and in the basin near the lighthouse it will be15.5metres. Currently one side of the port is 10metres and the other side where the tankers dock is 12.3metres maximum.

The bidders had the opportunity to visit the sites where there are wrecks and the ex-coast guard jetty that will be demolished as part of the expansion. SPA officers touring the site with the contractors noted that to remove the wrecks and debris will be dangerous work. The jetty at the ex-coast guard will be demolished as part of the contract and the contractors will have to make provisions for the removal of the barges, abandoned boats and those that have sunk. The work there will be complicated as the metals are very rusty, posing a risk for anyone who comes in the area.

Ms Samson added that due to the scope of the project and the impact it will cause, the SPA has to conduct an environmental and social impact assessment. She said they have since Tuesday started meeting with various government agencies to voice out their concerns and what measures will be put in place whilst the dredging and reclamation works are underway. “This is for us to reduce, mitigate and even avoid impacts on stakeholders,” she stated.

The dredging will also be conducted close to the marine park and there are many concerns on the matter. The environmental and social impact assessments have just started and have not been completed and Ms Samson acknowledged that it is only after the procedures and design have been finalised by the contractors as well as receipt of approval from government and lenders will the dredging work start.

Once the contractor is appointed Ms Samson presumes they will start the design works in June/July alongside the environmental and social impact assessments which will take up to six months.

She noted that usually the assessment and design phases are not conducted simultaneously but due to the delays they have faced, the two procedures have to work in parallel. The bidding contractors on their side have to demonstrate that they have the capacity, expertise, equipment, financial capacity and more importantly environmental expertise. Ms Samson stated that the contractors will have to show that they have worked in a similar environment and be able to deal with any issues that arise when working in a small island statelike Seychelles whereby tourism is of high importance.

In total there were 12 bidding contractors with nine shortlisted for the visit and discussions that followed.

Also present during the site visit and discussions were the director of project and infrastructure, Frankie Laporte, engineersMarc D’Offay and Charles Pool. 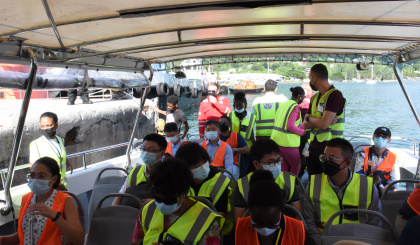 Representatives of contractors and media personnel touring theareas to be dredged and reclaimedmetres (Photo: Thomas Meriton) 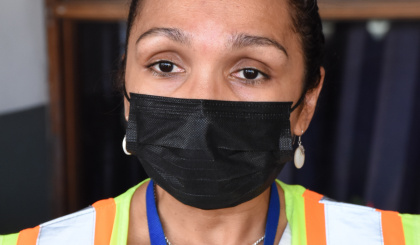