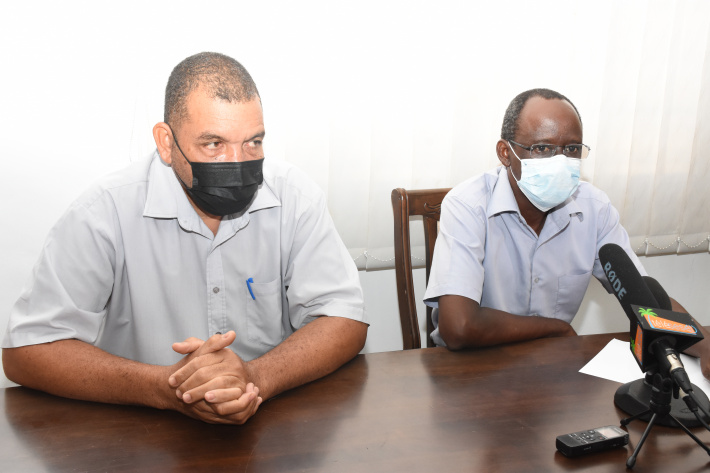 The Landscape and Waste Management Agency (LWMA) has announced that for the pre-Easter Clean-up Seychelles this weekend (Friday April 8 to Sunday April 10, 2022), people on Mahé, Praslin and La Digue will be required to carry their domestic waste to the landfills as it will not be carrying out street site collections.

It was the chief executive of LWMA, Sheils Barra, who made the announcement in a press briefing yesterday to explain the manner in which the pre-Easter Clean-up Seychelles will take place. Also present was waste manager, Estephan Germain.

Mr Barra noted that normally there is a charge for domestic waste coming to the landfills but for these coming three days there will be free disposal for waste that has been sorted out in the four categories – green waste, bulky waste, e-waste and construction waste.

There will also be specific bins in place for large PET bottles of 5 to 12 litres.

The domestic waste can all come in the same transport as long as they have been properly separated within that vehicle.

Waste that have been mixed in a manner that it is difficult to separate, will not be considered as part of the Clean-up Seychelles programme and the usual R75 per tonne will be imposed.

On explaining the reason for the separation of domestic waste, Mr Barra stated as the way to move forward, it is mainly to reduce the amount of waste on the landfills as they are all running out of space.

He added that there are a number of things that can be done with waste instead of putting them into the landfills and to do that they need to be sorted out.

He noted that by sorting out waste, which could further be recycled – such as turning the green waste into compost, bulky waste which can be shredded for better compaction or for extraction of resources and important component (same as in e-waste) that could be used locally or for exportation and construction materials that can be reused in construction – would prevent the landfills from being filled up too quickly and thus remain in use for longer periods.

Mr Barra said that the best way to deal with waste is to get the sources to sort them out in separate piles and which can after be collected separately for recycling actions.

He called on the public to cooperate with the agency to help solve the waste problem in the country.

Mr Barra said that the objective of Clean-up Seychelles is to help people get rid of some of their bulky waste that they have accumulated.

Apart from the pre-Easter (April) clean-up, the other clean-ups are held one week in June before Independence Day, in September for the Clean-Up the World and one week in December before Christmas.