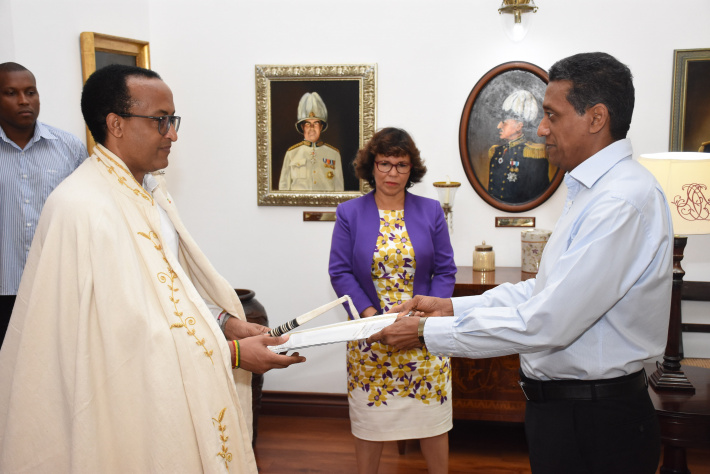 Bilateral and multi-lateral issues involving aviation, trade, investment, tourism and people to people through sports and cultural exchanges were the topic of discussions between President Danny Faure and the newly accredited Ethiopian ambassador to Seychelles, Meles Alem Tekea, yesterday morning at State House.

Mr Tekea was at State House to present his credentials to President Faure, which accredited him as the new ambassador of the Federal Republic of Ethiopia to the Republic of Seychelles.

Talking to the media after his meeting with President Faure, Ambassador Tekea said that the only way to strengthen the bilateral ties between Seychelles and Ethiopia is to get both peoples to know on each other.

He noted that he and President Faure have agreed to further raise relations between Ethiopia and Seychelles to new heights.

“No matter what kind of strong relations the two countries enjoy, if the relationship is not cascaded down to the people, it is weak. It won’t be sustained unless if it is only when people know about people. When you know about Ethiopia and Ethiopia knows about Seychelles it is then that we have strong and sustainable diplomatic relations,” Ambassador Tekea said.

Ambassador Tekea also said that during the talks, President Faure also conveyed an invitation for the President of the Federal Republic of Ethiopia, Sahle-Work Zewde, to visit Seychelles while also pledging to call on Ethiopian Prime Minister, Abiy Ahmed, in Addis Ababa on the sideline of the African Union summit in 2020.

He noted that apart from signing the double taxation agreement, pending ratification on our side, among signings of other memoranda of understanding, Ethiopia wants to revamp its relations with Seychelles in trade, tourism and investment.

Ambassador Tekea hailed the existence of air connectivity between Seychelles and Ethiopia through the Ethiopian Airlines thus contributing further to the tourism sector and to other economic sectors of both countries.

Ambassador Tekea, who is based in Nairobi, Kenya, replaces former Ethiopian ambassador to Seychelles, Dina Mufti Sid. Apart from representing his country to Seychelles, he is also the ambassador for Ethiopia to Kenya, the Comoros and Malawi.

Seychelles and the Federal Republic of Ethiopia established diplomatic relations on April 14, 1982. 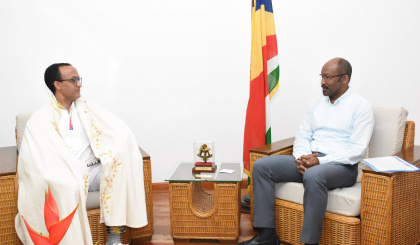 Ambassador Tekea during his call on Vice-President Meriton